It was my first ride of the year on the Professor, and a few tweaks were made – more air in the forks and rear shock, namely.  We started the red route, and it went rather well.  As previously mentioned, I’ve kept up a bit of fitness thanks to commuting by bike every day, but unfortunately I was still fighting a bit of a chest infection.

FUN FACT ABOUT MISSUS TOAST CHEST INFECTIONS!  Due to being overly ladylike, chest infections tend to linger for me.  Why?  Because instead of blowing my nose, or coughing up phlegm, I tend to… well, choke it down.  Snuffle it right back up, where it can be recycled.

As I rode around Dalby, I allowed myself to freely cough up phlegm and blow my nose like a trumpeter, as one of the joys of marriage is being disgusting without fear of reprisal.  Or at least, that’s what Mr Toast and his musical bottom tells me.

And cough I did, to the point of nearly being sick.  A definite benefit was that, since Dalby, my chest and sinuses have felt clearer than they had in months.  However, at the time, the lack of breathing ability made it somewhat difficult to ride, and we decided to do half the trail instead of the full 20-odd miles.

Unfortunately, Mr Toast’s memory (or sense of direction) wasn’t quite as good he thought, and we ended up doing only 6 miles of red route, and 10 miles of road.  It was a very pretty road, though.  We saw a stag.  That was nice…

After Yorkshire we travelled up to Scotland.  As July is a bit hectic this year, we decided to get some early Glentress in this year in case we couldn’t make it for our anniversary.  We stayed at our usual haunt, Glede Knowe, which was fantastic as always.

Somewhat stereotypically, it was beautiful weather on the drive up, and in the evening Mr Toast and I went for a lovely walk with t’boy down by the river, followed by a meal at the Traquair Arms.

The next day – the day we were riding –  started off beautiful, but quickly became gloomy and overcast.  The predictions of ‘light rain’ and ‘light showers’ were somewhat innaccurate, and we were instead faced with ‘fairly annoyingly persistent and not actually that light’ rain. For four hours.

The weather report was correct in surmising that the weather would improve in the afternoon – as we sat muddy and sodden in the cafe, the sun came out.  Then the next day, when we were driving home… sunniest and warmest day of the year. Ho hum.

We weren’t actually too disgruntled – the trails are still awesome fun in the rain. The only issue is, after that incident on Pennel’s Vennel that one rainy year, I now have no appetite to hit the red in the rain.  We did make one concession – we did the climb up to Spooky Wood, and then Spooky Wood itself.

The climb wasn’t anywhere near as bad as I remembered, and I also took to it with a bit more speed and aplomb than in previous years.  I confess, I didn’t do the very first drop, but I did everything else after that.  I didn’t get a burning sensation in my left thigh until right near the end, but my calves were screaming – I think I’m just a bit out of shape when it comes to off-road stuff!  Jolly good fun though.

And… oh look! A picture of me with the meteorite Stane.  How terribly original!

The blue at Glentress is definitely one of my favourite trails, if not the favourite. The climb up to the Buzzard’s Nest carpark is good fun, and the descent is also amazing – so swoopy, bermy and fast!

After Scotland it was back home, but on Friday we got to ride over Cannock Chase.  As we knew we were coming over again on Sunday, Mr Toast decided to nobly escort me around the Monkey… given that I’ve not really ridden in much over the past two years, and that I’ve come a cropper a couple of times on it, it seemed a wise decision.

We took it very easy (translation: I took it easy, Mr Toast waited), and there were a few bits I gave a wide berth – I merrily bypassed the rock gardens on the original Monkey, and also avoided the Klondike rocks and the Woodbank timber feature.  In hindsight I think I’d be fine with the latter, and probably be OK with Klondike as long as I take the left line instead of the right (as my wheel goes into the dip on the one rock and I get flung over the handlebars 50% of the time).  Can’t be arsed with the original Monkey though – discretion is the finer point of not dying, as they say.

I’ll really have to get into the habit of riding the Monkey more – I’m sure it’ll up my speed and confidence (assuming I don’t fall off and die).

On Sunday I pootled around the greens… on a Duet Wheelchair Bike! Yes, Swinnerton’s have one now, so my mother can experience the joys of the Chase.  She was somewhat disconcerted by the sight of an ambulance at the Rollers (broken collar bone, apparently), and she made me promise that I wouldn’t take her on the Rollers…

The Chase greens are generally lovely for wheelchairs – they’re not quite as potholey as the Tissington Trail – but there’s the odd bit that’s awkward.  Some of the off-camber bits can be quite tricky, and returning on the green made me realise I had the choice of following the green through the stream (which my mother wasn’t keen on), or going over the bridge around the pool (which she was even less keen on due to the path crumbling away).  Still, we got around in one piece, although we ended up doing a few more laps just around the ‘Walk for Health’ green route, which was very easy.  TOP TIP! Carrying an extra 10 1/2 stone of mother on the front of the bike is great for fitness.

So overall, a great week for riding – I just wish we could do it more!

Ah, shorts.  Next to shoes, getting trousers and shorts that even remotely fit is the bane of my clothing existence.

A word on my physique – I am short of leg, and wide of arse and thigh, but relatively narrow of waist.  This, dear readers, is a problem.  What normally happens with trousers or shorts is that I go for one size, and I can’t get them over my hips.  Nope, nope, nope.  But if I go for the next size up… huzzah!  They pass the thighs and hips and… oh.  Oh, right.  I have an extra two inches or so of waist band.  Awesome.  I end up with loads of excess fabric, and end up having to wear belts, which I dislike for two reasons:

1) It bunches up the waistband and looks awful

2) I’m allergic to nickel, which is what’s generally used in costume jewellery and belt buckles.  So I quite often end up with an unslightly (AND ITCHY) rash on my belly.

Given that I’m not blessed with the most attractive pins in the world (especially given the events of the previous post), I like 3/4 length shorts, which seem to be quite hard to get hold of if you’re a lady – quite a few will claim to be 3/4 length but only be knee-length… and believe me, it’s not because I have long legs.

So, here, for your delight and delectation – the world of Missus Toast’s biking shorts. 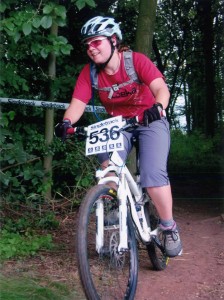 So these shorts have been bloody fantastic:

Despite being used for commuting to work, weekend mountain biking and 24 hour races in horrendous weather, they’re still in perfect condition.  And yes, I wash them after every ride as well, thanks for asking. In the case of my older grey pair, they also survived the 2010 crash that took out my helmet and a good chunk of the skin on my right arm.  The blood washed out nicely! 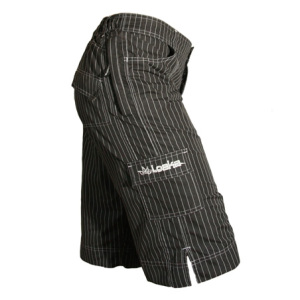 I bought these last year.  The dimensions are a bit unusual – I’d personally say they’re a bit short to be classed as ‘capri length’, but they are just about knee length on my hobbity legs.  They’re very baggy in the leg, which makes a nice change, but they are also quite baggy around the waist and gut – not too bad though.  More room for cake, eh?

The Hummvees are very popular, both the male and female versions.  Unfortunately, despite being the most expensive shorts I’ve bought**, they’re the only ones I didn’t really get on with.  Again, this is probably due to my rather… ahem, ‘stout’ legs.  The Hummvees are definitely designed for those more slender of pins.  They’re a nice length, but very slim fitting, and I found the velcro fastenings around the back of the knee quite annoying.  The belt that comes with it is also a bit rubbish.  It’s frustrating, because the quality and look (when worn by others…) is great.

So overall, the Synchros are winning in the battle of the shorts, with the Loeka shorts being a close second – if they were just a bit longer, they’d probably be my favourites.  The Hummvees make me sad, because they make me realise how ridiculously out of proportion my thighs are compared to the rest of my body. 🙁

*Seriously, I really don’t like putting things in my pockets.  Ever.

**It’s probably worth mentioning that I have a tendency to only buy cycling clothes if they’re heavily discounted, usually because they’re last year’s stock, etc.  I am married to a Yorkshireman, after all.