I generally have a pretty monogamous relationship with Devastator, my Stumpjumper. He’s confidence inspiring, fun to ride, and lovely to look at. But sometimes, I get curious about other bikes, so it’s great when demo day season kicks in.

I attended last year’s Leisure Lakes demo day as I was helping to man the Chase Trails tent. I was also five months pregnant, so restricted myself to a Haibike Sduro ebike. This year I started off the same, only a slightly smaller Sduro (35cm instead of 40cm). It made for a more comfortable ride, but the smaller Haibikes are only available with the Yamaha motors, due to the battery – the Yamaha’s slide out sideways, whereas the Bosch lift up – and there’s not enough room in the frame for that. 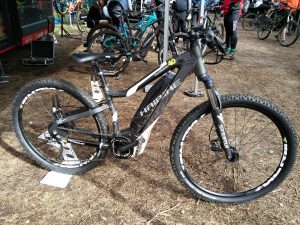 Not that the Yamaha motor is a problem – I avoided the demo loop that took in the last few sections of Follow the Dog, due to fear and cowardice, instead heading down the blue. I hoped to do the short blue, and hoped I didn’t run too much over the allocated 30 minutes. 20 minutes later I was returning the bike with a big grin on my face, having cackled merrily all the way up a hill.

Bizarrely, I probably get more out of breath uphill on an ebike than on a regular bike – on the latter, I have to go into an easy gear and spin up hills, due to my substandard knee cartilage and lack of ligaments. It’s a big strain on the legs, but not so much cardio wise. On an ebike, I’m pedalling like the clappers and guffawing as I fly uphill. Lovely stuff!

Second bike was a bit off an odd choice – a small Orange P7. There’s something lovely about a nice, simple hardtail (Mr Toast has a gorgeous SIngular Swift). As I rode out with Chase Trails’ trail builder and noted Apple fanboy Will, it became fairly obvious that ‘small’ in Orange wasn’t quite small enough. 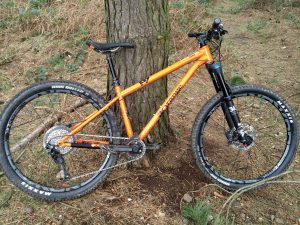 Again avoiding the demo loop, we rode to the start of Section 12, which marked my first attempt at riding any of FtD for over a year. The P7 felt a bit skittish and unwieldy, but that was down to the too small, rubbish rider. I literally stopped on a descent that has no drops and is a straight line (and is in no way off piste, ahem) because I panicked over what might happen. Boooo!

Third bike was a Specialized Turbo Levo, Spesh’s full susser ebike. Despite my better judgement, I ended up on the women’s ride, which was going around Follow the Dog. So, after being off FtD for well over a year, there I was, on an unfamiliar bike, in a group ride (so putting myself under loads of pressure). 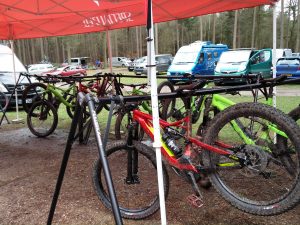 It wasn’t a complete disaster, but I was very, very nervy, and massively struggled with… corners. Downhill switchbacks, uphill ones – I’m normally pretty bad with them, but that day… yeesh. I did also nearly come a cropper just before the Rollers, when I took the ‘easy’ side of the rock feature, over cooked slightly, headed towards the drainage ditch, hit a stump, but miraculously managed to correct myself. My heart was in my throat, but I was quite pleased at my save.

I did Twist & Shout, hovering at the back. However, I was painfully conscious that I was a) on the only small Turbo Levo they had to demo, and b) holding everyone up. So I bid the ladies farewell, and headed back to Tackeroo. I was alternating between frustration and satisfaction – I felt that I’d embarrassed myself a bit, and recognised that I’ve got my work cut out to return to my previous level, but at the same time, I’d got back on the red route, ridden Tackeroo, etc.

My cunning plan was to next demo a Cube ebike. However, the small was out. Did I want to demo a standard bike? Sure, why not. So I demoed a 13.5″ Cube Stereo, and it was actually rather lovely. 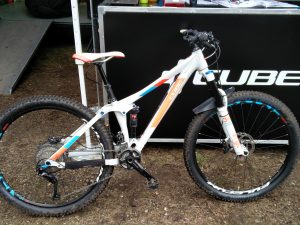 Emboldened by my earlier efforts, I took the Cube to a different part of the Dog, and did the Bomb Hole. And you know what? I actually did it in a half decent time (for me). I’m guessing it was because the Cube was a good size for me, very nimble, and more like what I’m used to.

So, overall musings – Orange P7 was a bit useless for me as it was too big. The two ebikes were really good fun, and it was interesting to see the difference in the motorised assistance. The Specialized felt like it kicked on the first pedal stroke, giving you instant zoomy fun, whereas the Haibike felt like it took a few pedal strokes to kick in, a bit more subtle. On climbs, however, the Haibike felt like it gave quite a bit more assistance – however, that could have been because I’d been riding for a while and was possibly a bit knackered by the time I was taking the Levo uphill! Either way, I’d definitely love an ebike for exploring.

For trail centre riding though, I definitely felt more comfortable on a normal full susser – which is fortunate, as I have an excellent one in my Stumpy!

I had a pretty easy pregnancy, all things considered.  I managed to get out on the bike a couple of times during the first two trimesters, but being fairly risk averse at the best of times, I took it very steady. I even got a heart rate monitor to make sure that I didn’t go over the oft-cited 140 limit.  This gave me two options:

I generally stuck to 1, but I did get the opportunity to demo an e-bike at the Leisure Lakes Demo Day last year. It was glorious – it was the first time I’ve ever been able to ride up a hill with no knee pain whatsoever. It also created the (probably comical) sight of five month pregnant woman sailing past a load of other riders. I was doing 11mph. Uphill. To put this in context, my Garmin normally autopauses on the same hill because I’m going so slow…

But, just as summer was cranking up, so was my girth, lack of balance and pelvic girdle pain, and it was getting increasingly difficult to ride. One of the hardest things was the feeling of restriction and desperately missing the woods, especially whilst the weather was glorious.

Fortunately my relatively easy pregnancy was followed by a relatively easy birth – unlike his mother, my son was a speedy little fellow (less than four hours, I’ve had longer bike rides!).  Six weeks later I got the OK from the doctor, and went on a short ride down the greenway.  I managed just under ten miles of flat riding without too much grief, but was a bit tender afterwards.  Which isn’t hugely surprising, really.

Since then, I’ve been gradually increasing my riding. It’s been slow going, as I’ve been breastfeeding, so it’s been hard leaving the little fellow, but he takes a bottle well so I’ve been able to get out a bit.

Since he hit the six month mark, I’ve gotten a bit more adventurous and started ‘proper’ riding again. I was hoping to have an ebike when I got back riding, as it make it easier riding through winter, with dodgy knees and baby weight, but after a sensible look at our finances we decided against it. Maybe next year. 🙁

So, it was just me and Devastator. I was a bit worried – it’d be my first real test of fitness.  What if my legs crapped out on me?  What if I couldn’t cope cardio-wise?

I won’t lie, it was tough – I was only doing the blue route, but it was the hardest I’d found it in years.  I loved being out though, although it was cold, and miserable, and my knees hurt.  Happily though, my woes were more muscular than cardiovascular – I hadn’t lost too much fitness, but my joints were still knackered from longstanding injury, pregnancy (hello, relaxin!) and the excess weight I still need to shed.

I’ve been out a few more times over Sherbrook Valley, and once over Dalby blue.  Dalby blue is massively improved since the last time, with more single track added. Again, I struggled a bit – I found the initial climb very tough, and the final descent (hooray for flat bits!).

It’d be so easy to get demoralised, as I have been in the past, but I just loved being out, unperturbed by my shoddiness. Ultimately, I’m in a better place than I was when I first started biking, so I’m sure I can get back to where I was!