…you’ve had your fun, now bugger off!

Finding it a bit hard to get out at the moment – it’s not so much the biking in the cold that bothers me, it’s the two and a half hour round trip to get anywhere with decent riding.  We actually went out for a ride last weekend, just around the local lanes and the one ridable bridleway.  It was nice to get out, but the wind left me with a stabbing pain in my ears (even buffed up!), and road riding is just grey and depressing in winter, even in the countryside.  I’d bloody kill for some decent offroad riding near us! 🙁

Still, we’ve got to get ourselves out next weekend for the final big push to get Phase II finished – it’ll mainly be focusing on surfacing, so everyone’s been asked to bring along a wheelbarrow if they can.  We don’t own a wheelbarrow, but we’ll still be going along, I’m sure there’s something we can do!

In celebration, I made the MOST HIDEOUS poster ever.  Initially it was going to be quite classy and arty, but I was a bit pressed for time, so settled for MBUK early 90s garishness.   Eww… …I forgot to mention the unicyclists I saw on Sunday!

Unicycling offroad in the snow – I don’t think even MBUK has a term gnarly/rad enough for it!

Today was my first ride of the year.  It’s taken us a couple of weeks to get over the Chase – we’ve been on holiday (the Dominican Republic, 27 degrees, lovely), then my car broke (rear wheel bearing, £95, not lovely).  But we’re back, and my, wasn’t the weather…well, it wasn’t like the Dominican!

Earlier in the week, we’d looked at the weather forecast to decide which day to go.  Both days were predicted to be chilly, but with clear skies and sunshine.  Young master Ovide, who joined us on our adventures today, expressed a preference for Sunday, so Sunday it was!

The sunny weather was as predicted for Saturday, but Sunday looked a bit cloudy.  It looked dry though, so I left the waterproof at home and settled for the thermal.  And so it was…until we started heading past Longdon.  Suddenly we were hit by a blizzard, which was surprising to say the least!  Pulling into Birches Valley was bizarre.  It was snowy!  SNOWY!  However the snowfall had stopped, so it looked like I was safe without my waterproof.

Having not been on the bike since December, and being a bit of a coward in inclement weather, I decided to take it easy on the green route.  Fortunately, I’ve not lost much fitness over the past few weeks of indolence, although that’s possibly because I had very little to start with!  And (this may be justification for my latest purchase), I actually found it a little easier going.  This may be down one or more of the following three factors:

1) New shoes!  No, really.  After three or four years of faithful service, I’ve finally bought a pair of proper biking shoes.  Not SPDs, but Five Ten Karvers.  They are incredibly comfortable, and incredibly grippy!My feet no longer creep forwards on the pedals, or slide around, and I don’t have to push as much. How odd.  I clearly should have bought new shoes a lot earlier. 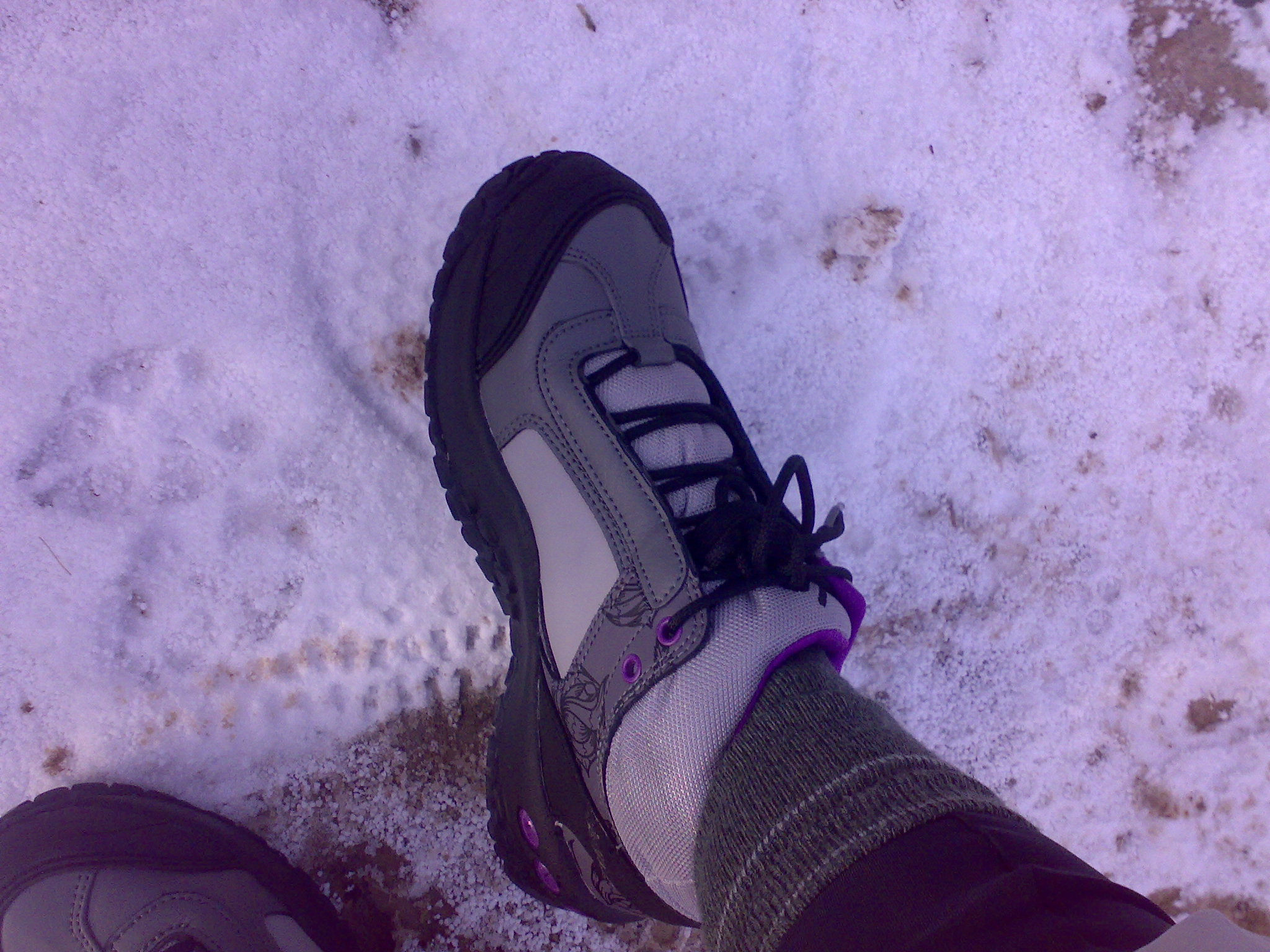 2) Since New Year, I’ve made a concerted effort to lose some weight – seven pounds shed so far!  I think losing a bit of weight helps, and cutting back on the cakes is cheaper than smothering my bike with carbon and titanium components!

Anyhoo, back to the weather. Riding with a layer of snow on the ground is a bit of a novelty, and I think it’s only the second time I’ve done it – the first time was a bit lighter too.   I definitely prefer snow to bog standard dampness! 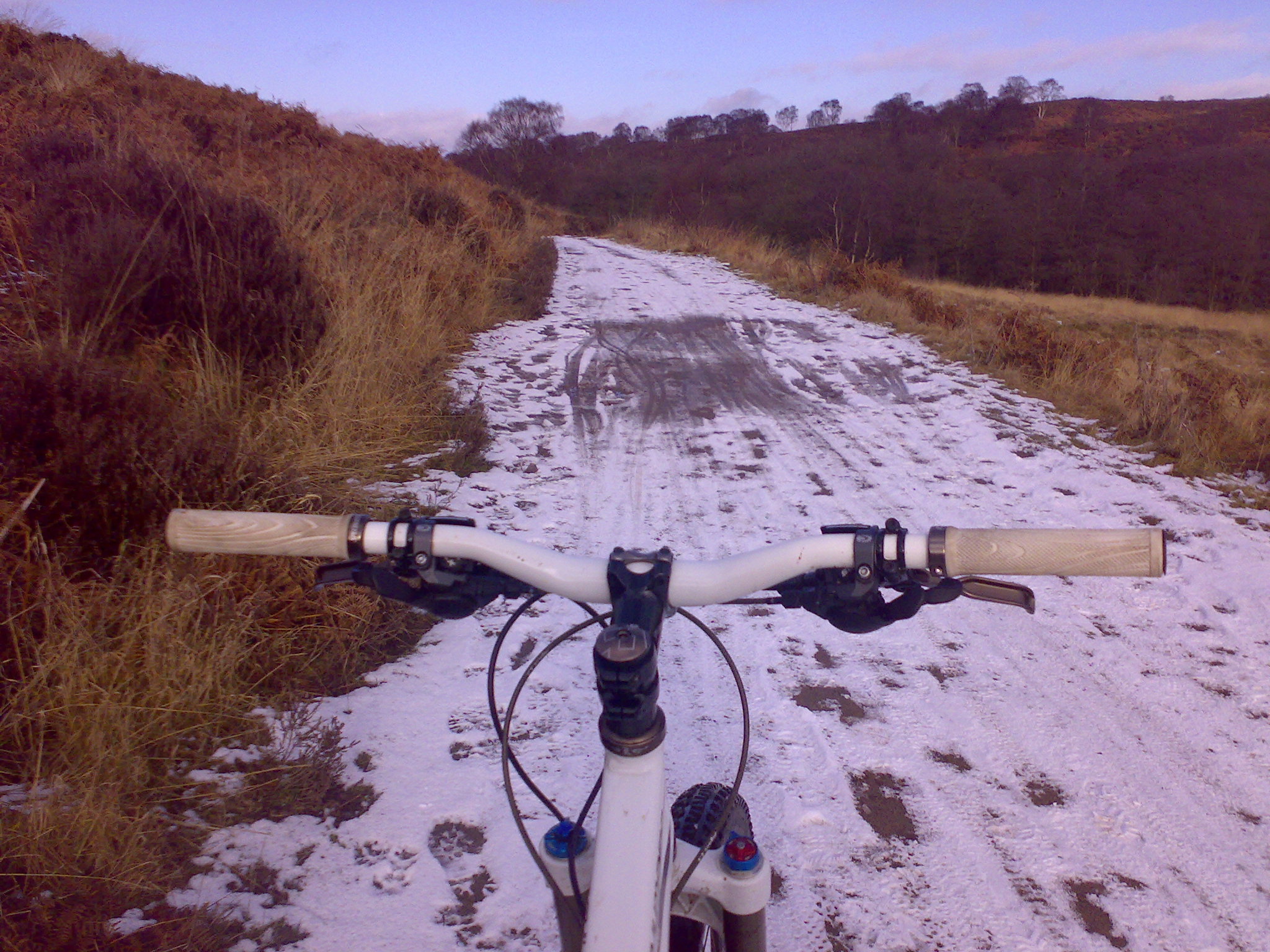 …and there was a bit more coverage the higher the route got.  There were lots of people out though, especially dog walkers and other cyclists. 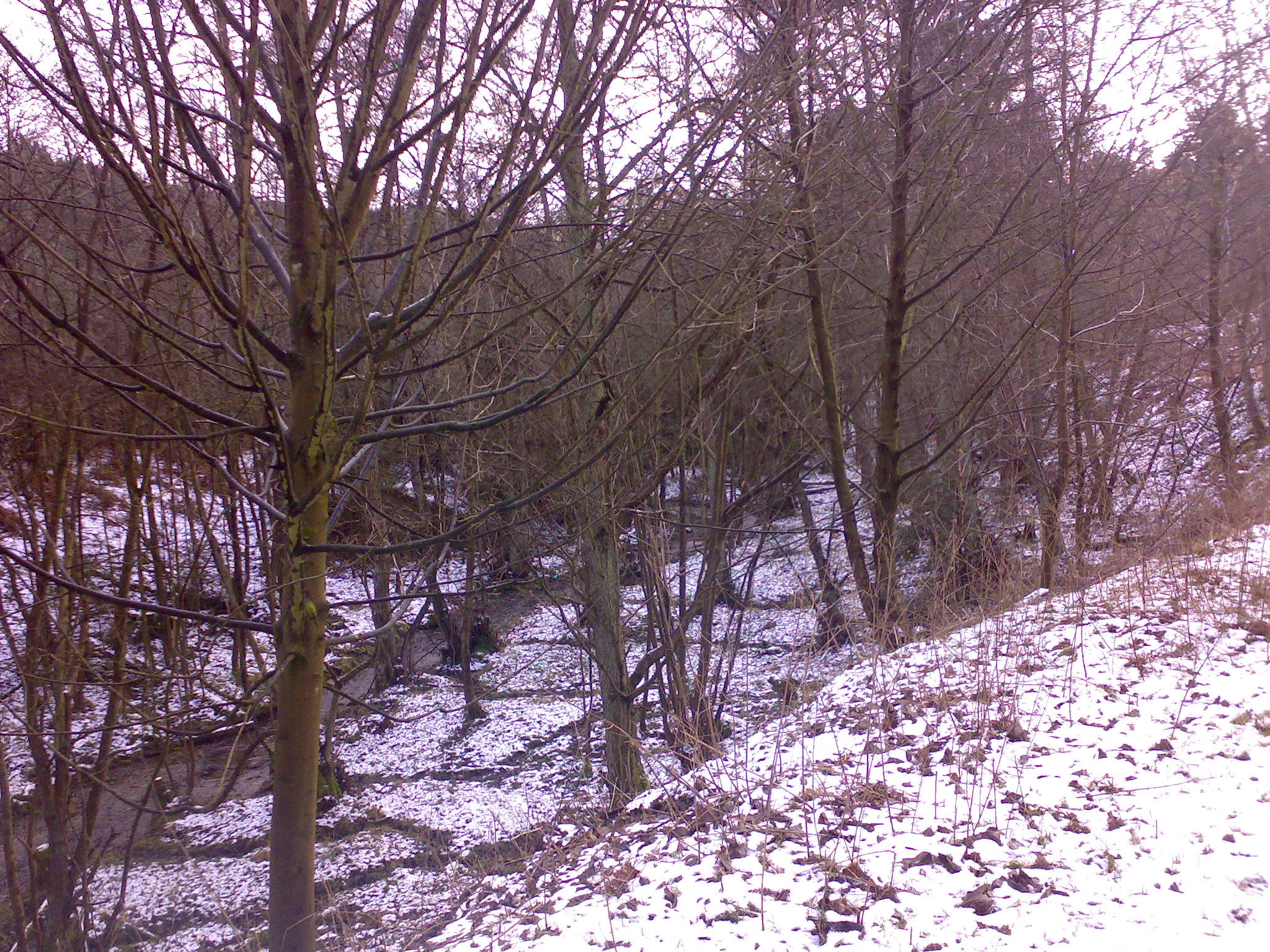 So far, so pleasant.  Nippy, but nothing my new merino base layer couldn’t handle (er yeah, been on a bit of an accessory spending spree this month…).  But as I started the climb out of the valley and towards the Tackaroo, I detected a few light flakes of snow.  Then, after reaching the top, I got my reward… 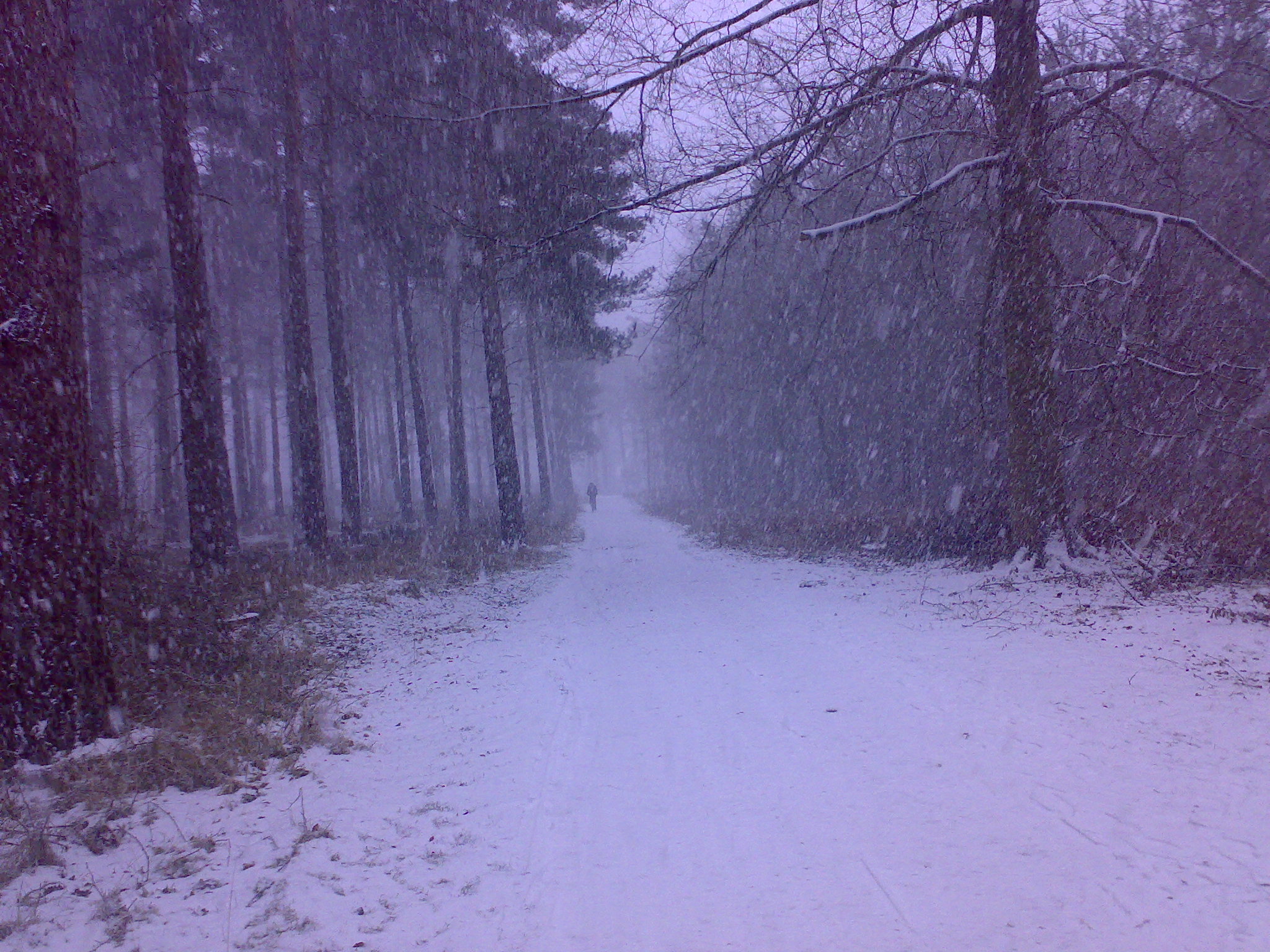 Now, I still hold my newly found opinion that riding in the snow, even in a heavy snow shower is AWESOME! It does present a few logistical problems, however, like “Not actually being able to see” and “Collecting snow upon one’s person”. By the time I returned to the start of section 13, both myself and the Professor had collected snow in various nooks and crannies. 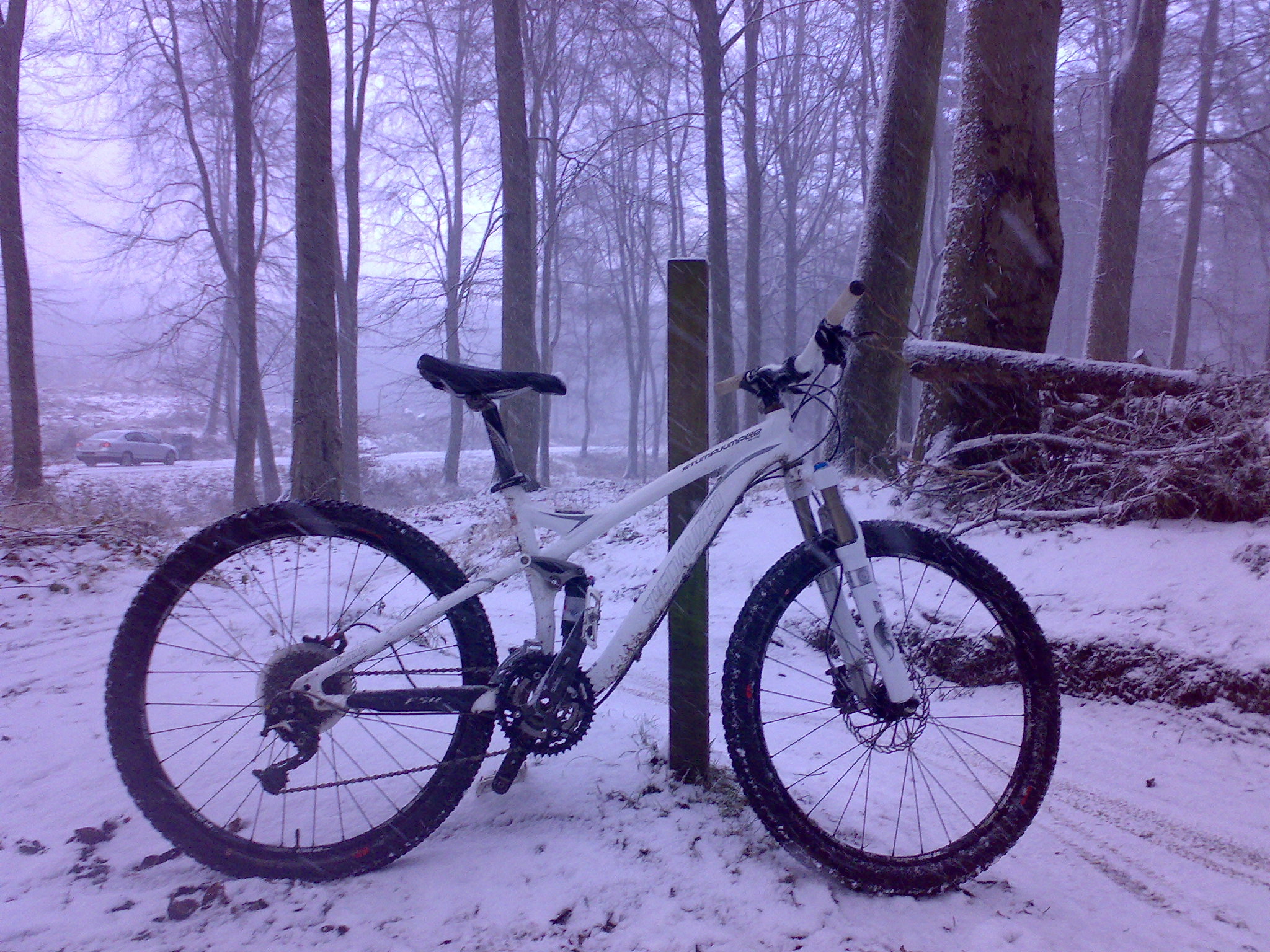 By this point Ovide and Mr Toast had caught up (they set out slightly later due to Mr Toast having a slight mishap with his new Camelbak).  Apparently they’d been trying to track me by following my tyre prints.  Once again, I inwardly marvelled at my husband’s bike geekery, he’s always able to identify tyres by their tread.  He should have gone on ‘You Bet’.

We pootled off down section 13, which is still awesome.  And snowy.  Unfortunately Mr Toast and Ovide were in a bit more of a state than me.  Being manly men, they don’t do accessoring, so lacked the layers to ensure warmth and comfort.  HAW HAW!  So we went back to the café and drank tea and ate cakes.

Good dogs seen: A malamute, a rather bouffant Alsation, and a variety of jack russells.