Excellent. The sun is shining, it’s pleasantly warm and the trails are dry.  It’s almost like spring!

After the recent weather and a bout of the standard office lurgy, was eager to get out.  Benny was dropped off at Old Farm Dog Boarding, where he enjoys long walks and running about in a huge garden with lots of other friendly dogs ranging from pugs and shih tzus to rottweilers and labradors (it’s quite a sight to behold…).  So, with Benny safely taken care of, we were able to go forth and bike and the same time!  Huzzah!

Instead, I headed out from Birches Valley onto the blue.  As I passed the Stegosaur, I thought, “Well… I’ll go to up the fireroad hill and do 9, 10, 11 and 12”.  So I veered off in that direction instead.  It started out quite well – I pootled up the the fireroad hill steadily, and always in middle ring, with less trouble than in the past.  It looks like the commuting over winter has definitely boosted my fitness, even if it hasn’t kept the weight off!

I did the first part of section 8, then followed the diversion to section 9. So far so good.  I was riding well, even managed to overtake a few blokes…

The first boardwalk on section 9 is an innocent little thing.  It has a clear run onto it – no awkward roots or large pebbles – you just ride in a straight line onto it.  I’ve done it loads of times.  I’ve done it a few times on the rare occasions I’ve been biking this year, on my 29er.  So what went wrong?

Well, it seems that I slowed too much on the approach, and was in too high a gear.  The front wheel veered off to the left, but I managed to catch it and get my foot down on the ground.  Unfortunately… I’m very small.  The height difference between my left foot on the ground and the rest of my body being on a bike on a board walk a few inches higher was too great, and after stopping, with grim inevitability… I fell over.  I’m not entirely convinced that falling off the bike once you’ve stopped is classed as an ‘off’, but… well, it’s a bit of a moot point really.  I ended up on my arse, legs in the air, entangled in my bike.  And those guys I passed?

Yeah, right behind me.

At the time, it felt that my pride had taken the main blow.  My leg had a couple of nasty scratches and a few specs of blood, but I just got back up and dusted myself off, and continued.  I pondered just getting back on the blue, but decided that was stupid, because I’ve been riding FtD without incident for years, and there’s no point getting a complex now.  So I carried on with 10, 11 and 12.  Without incident.  So there!

Crossed over the road (without incident) and took to the blue, but veered off for some cheekiness down the German cemetery which was a lot more rideable than last time I attempted it.  I guess not being covered in snow and ice does wonders for a trail.

I looped back and rejoined the blue. By this point my leg was starting to smart a bit, and the nasty scratches were starting to look a bit nastier. 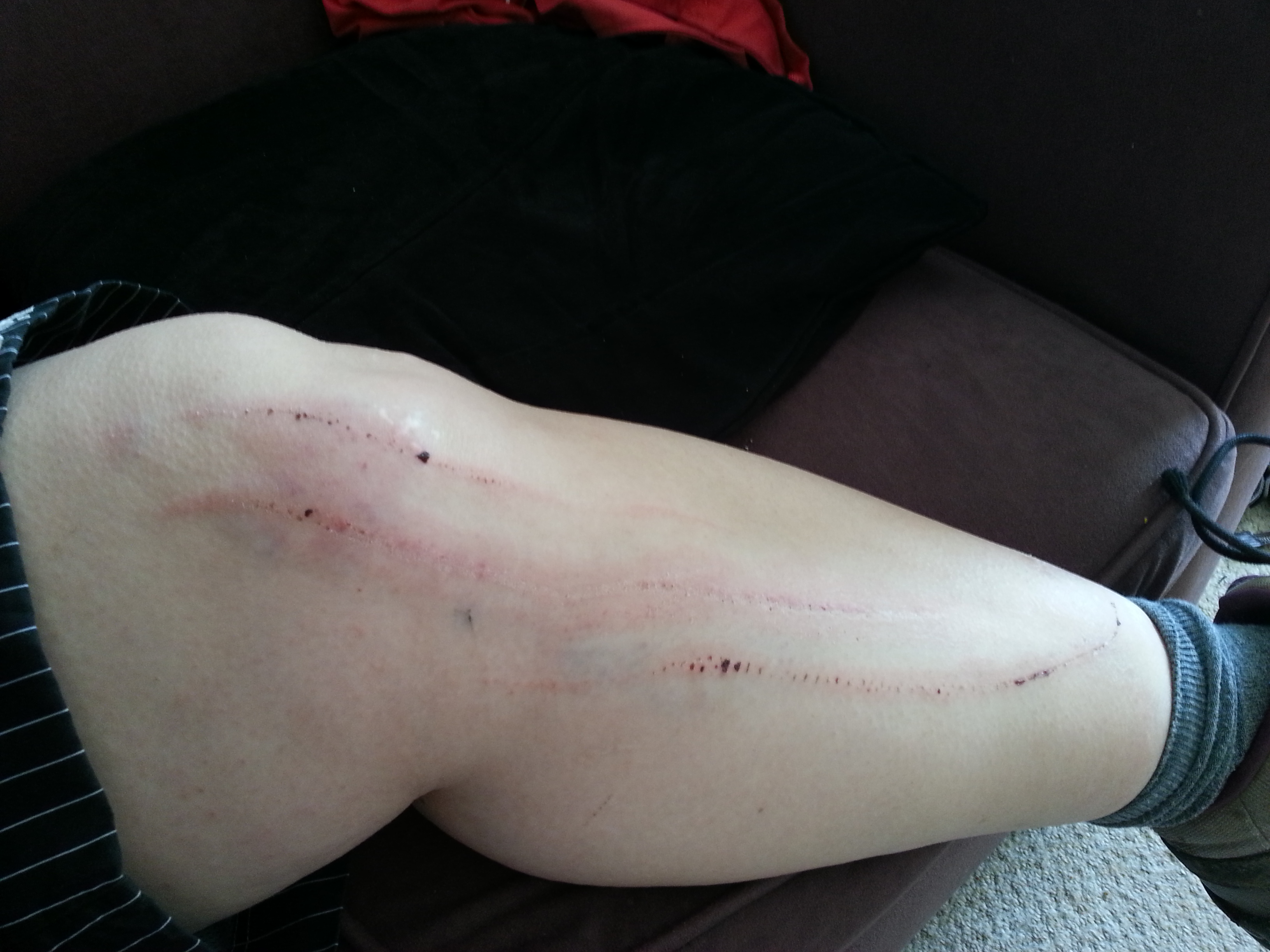 Still, I’d had an awesome day and it was fantastic being back out on the trails.  Can’t make an omlette without breaking a few eggs, etc- 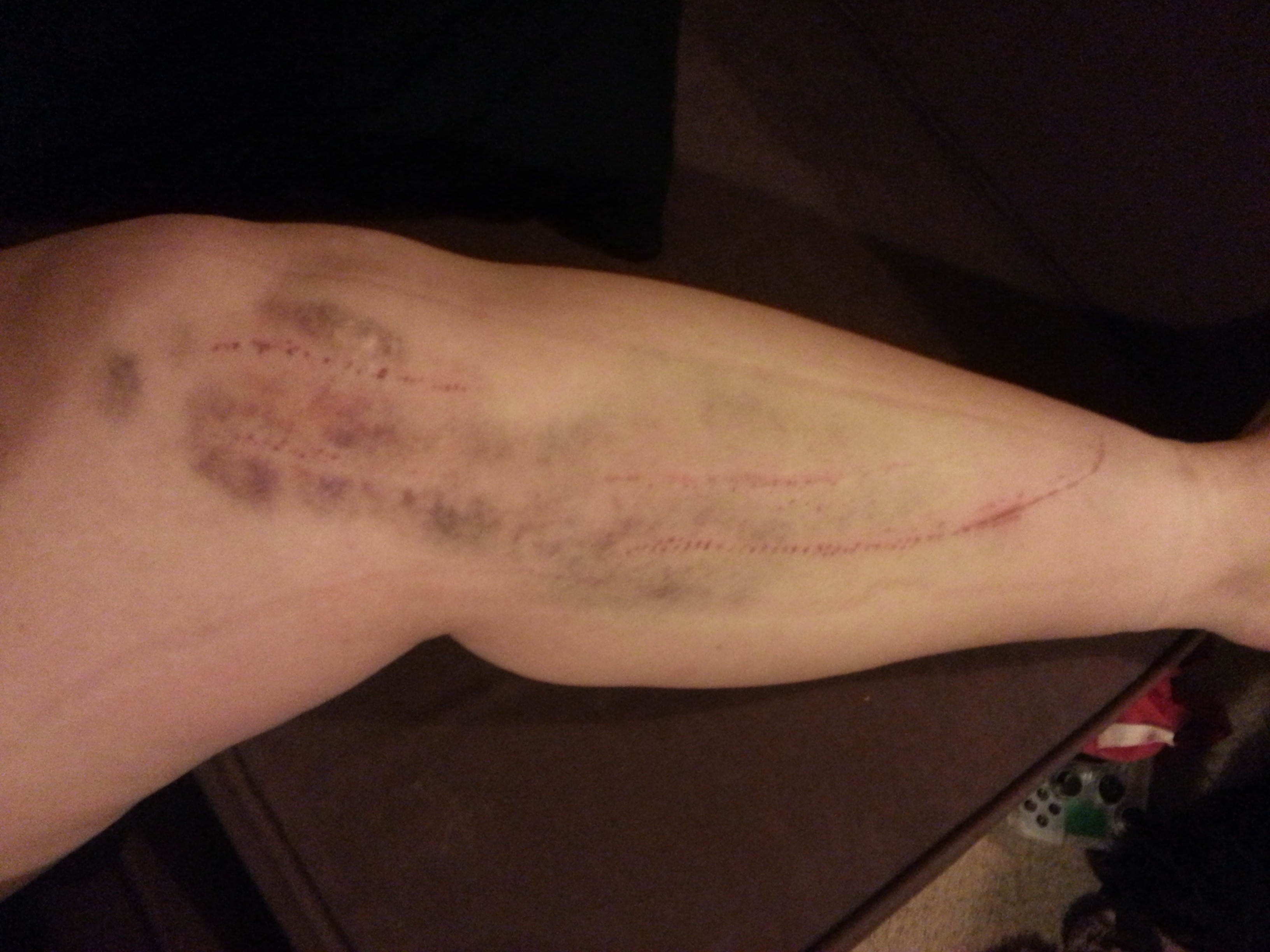 Sunday was interesting.  I got out of bed, and almost immediately fell over due to not being able to put any weight on my leg.  Eventually I managed to stretch it into a usable state, but it wasn’t a pleasant experience.  I got the bus in on Monday…

But today I’ve biked backwards and forwards from work, including extra sessions at lunch to check on Benny.  Other than a slight bit of stiffness, it seems fine, and the bruises are yellowing nicely!  I AM WOLVERINE! \o/ Except he’s the best at what he does.  I’m not the best at mountain biking. 🙁

Despite my comedy injury, I’m really looking forward to more biking this year.  We’ve got Dalby and Glentress planned for next week, so hopefully I’ll be able to enjoy those trails without anymore comedy offs…

* I nearly worded this statement “Mr Toast wanted to hit The Dog”, but given the previous paragraph I worried that people might take it out of context!