Yesterday was a bit of an odd’un.  I was feeling a bit rundown and lacking in energy, possibly due to a combination of work stress and crappy diet.  Despite that, I had an awesome day – slow as hell, but feeling in complete control of the Professor.

The ride started off well, with heady overtones of smugness.  I’d reached the start of section two to find two groups of blokes getting ready to go.  I let them and another chap go first, not wanting to hold them up.  As it turned out, I didn’t have to worry – they were trundling quite slowly, to the point that the last chap that went eventually asked them if he could pass.  I followed him, and he zoomed off ahead, but the guys behind never caught me up. Despite not being hugely competitive, it is comforting to know I’m not the worst person on the trail.

Nearly had an accident with a walker, who had stepped to one side to let the guy in front by, then nearly stepped in front of me as she fiddled with her headphones.  Not sure why she was walking a mountain biking trail on her own, I probably should have asked, but I was eager to crack on.

Now, you may recall a few weeks back my experiences of Scottish red routes, and their fondness of rockery.  Before I’d set off, I’d seen Rob from Chase Trails at Swinnertons, and he’d mentioned that some rocks had been put in on FtD.  I was surprised, but not nearly as surprised as when I actually saw them. 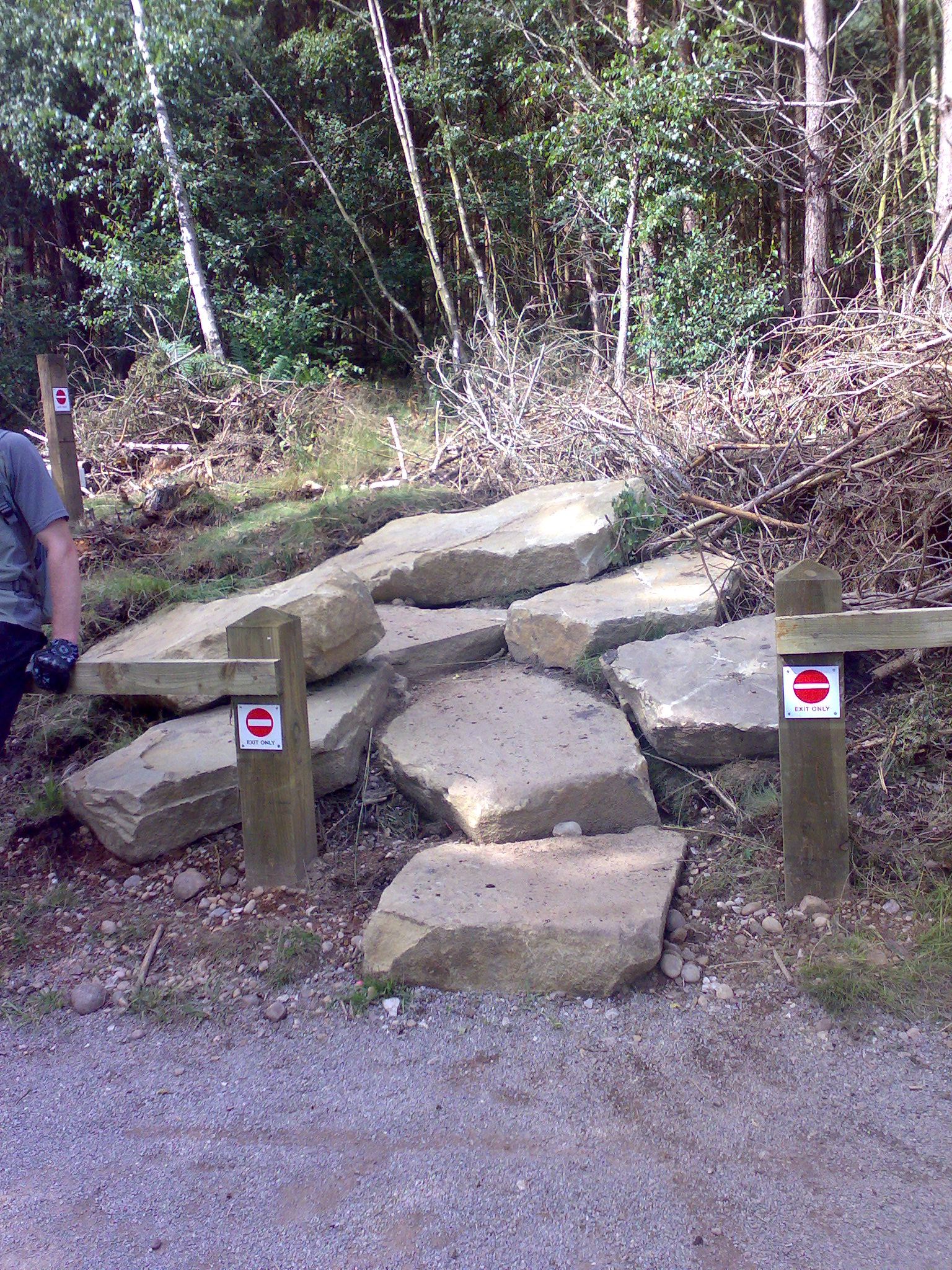 Yes, this is the new exit to section two – gone are the root steps, in with the rocks!  I fluffed these particular rocks as I caught my pedal on the turn, and ending up edging the bike down whilst Rob watched, grinning slightly.  Even though I’d been told about them, they were still…surprising.  Rocks on FtD?  It’s like being mugged by a squirrel with a flickknife!

I managed to redeem myself slightly with section 6, which has also been blessed with rocks.  I was eyeing it suspiciously – it was the fact it’s rockery into a turn that was unnerving me.  However with some encouragement from Rob, and the knowledge that I’d ridden similar in Scotland, I rode it…fine, actually. 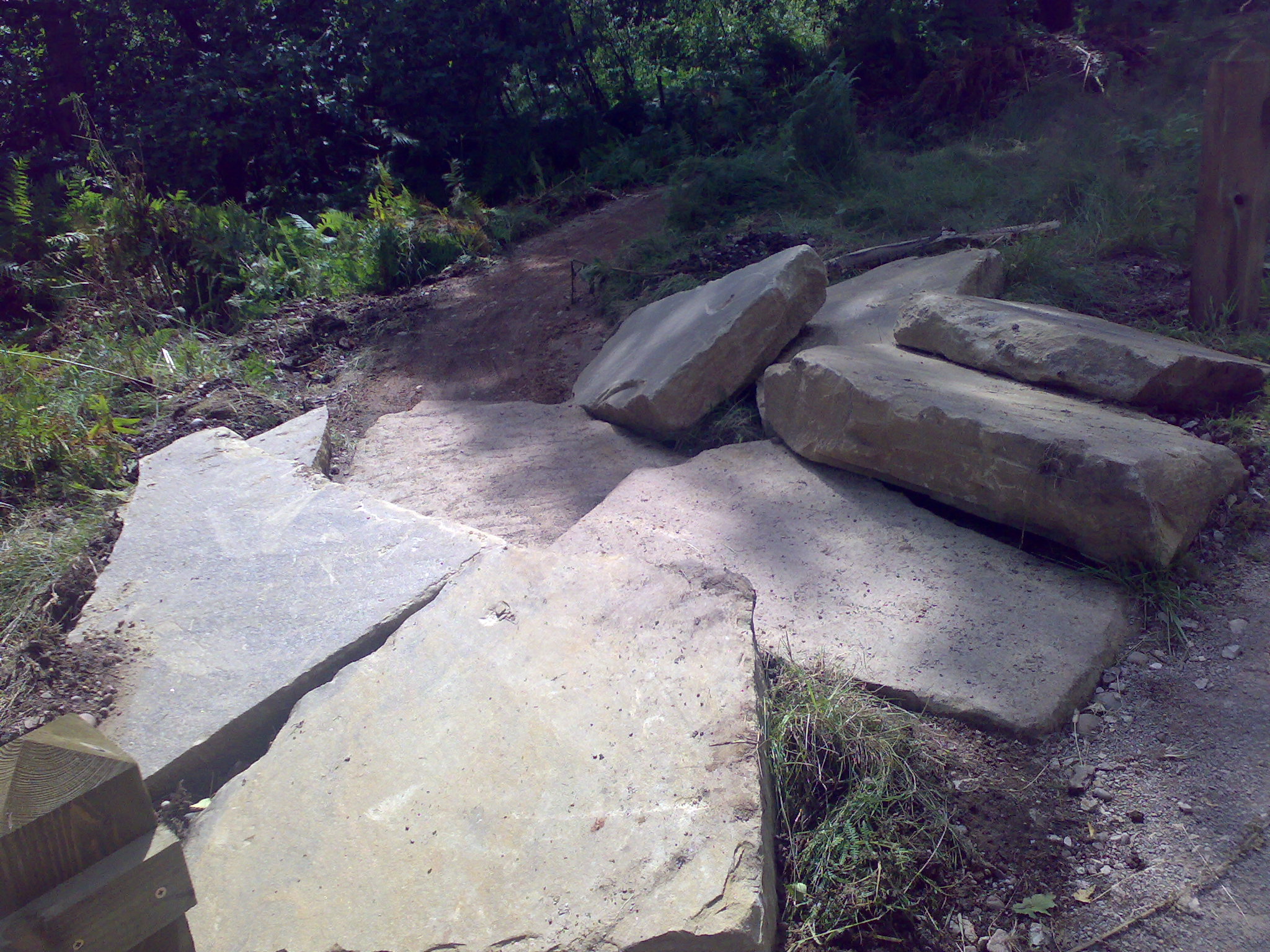 But wait!  There’s more!  A good stretch of rock armoured trail leading to the first boardwalk.  Again, I managed to fluff this one just as the Forestry Commission chap took a picture – there now very well be photographic evidence on that knocking about somewhere… 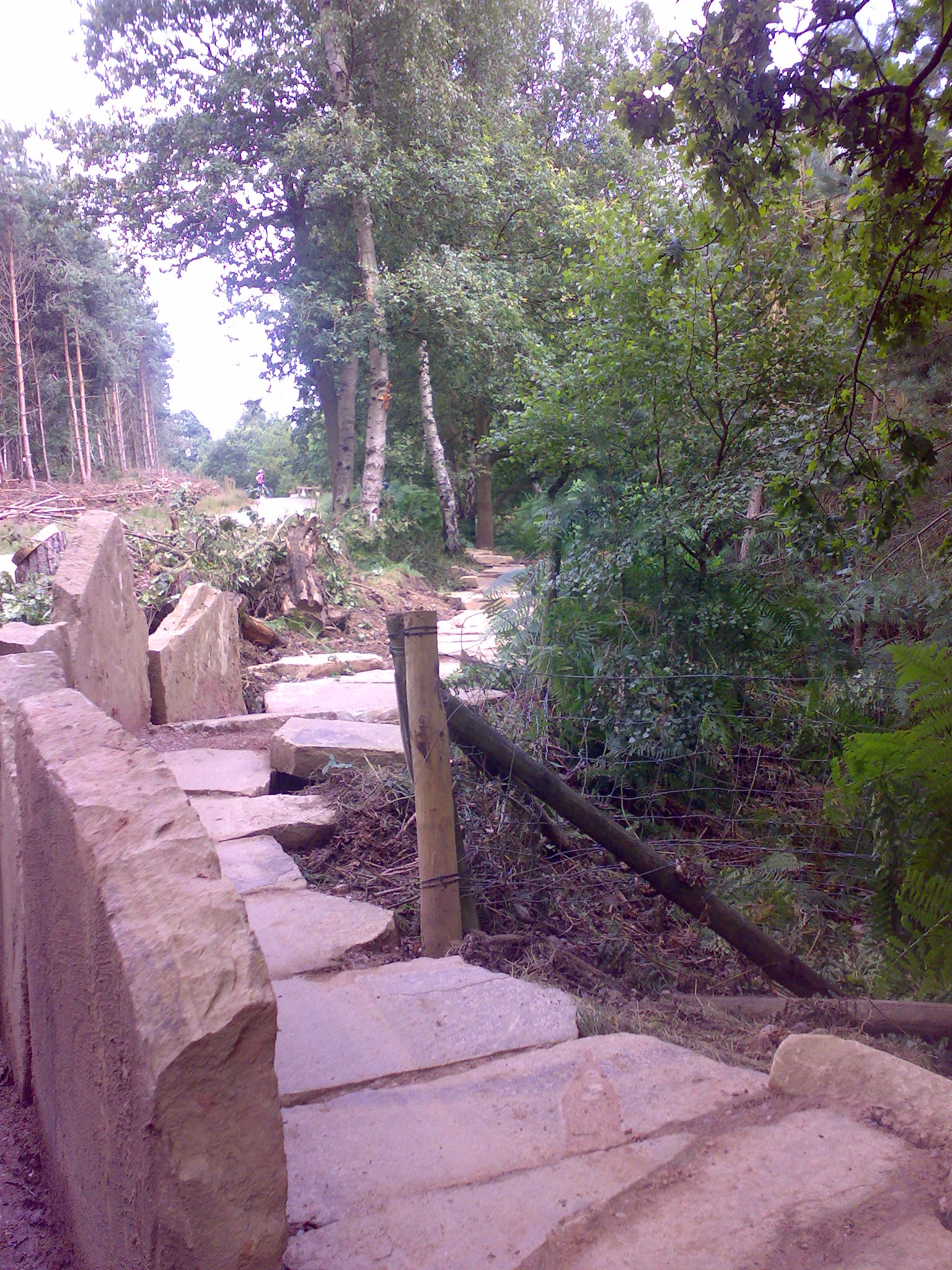 Rode the rest of it without issue, although the bottom of the boardwalk is getting a bit soft and squishy.  Probably needs some rocks…

Went back and rode it again, much better the second time around.  There was a lot of encouragement, and it was awesome to see my old bike, the Trekadee, also being put through its paces – Charlotte, its new owner, was repeatedly riding the rocky sections.  Especially when there were people nervously looking at them, or walking their bikes down…

It was surprising to see how people tackled them, who chickened out, and who didn’t.  Possibly the oddest sight was a slightly Posh Spice-esque woman with no helmet, wearing massive sunglasses, tiny shorts, a vest top and flip-flops rolling down the rockery on her GT hardtail without issue. Very surreal.

I’m quite glad that I’d experienced mental rockery in Scotland, because I think I would have just utterly chickened out otherwise.  As with a lot of the stuff in Dalbeattie, the FtD rockery is actually fairly easy to ride as long as you don’t let it intimidate you with its slabby goodness.  The rocks definitely add a bit of oomph and variety to FtD though, and are really well done.  I’m really looking forward to getting properly confident on them, and hopefully getting rid of my ‘Rockery Face’, which looks a bit like this: End of section six has now been smoothed out, losing the huge eroded pits and puddles that had plagued it for a fair while now.

Realising that I was feeling a bit lethargic, I took everything at a very steady pace, although I took fewer and shorter breaks.  I took the end of section 8 with no hesitation whatsoever, which is a first – normally I either stop to pluck up courage, or *cough* chicken out *cough*.  Still need to work on the jumps on section 8 – the first two I’m fine with, but I take the last three a bit heavily – it’d probably help if I learnt how to jump…

Evil Root Two was nearly conquered, but alas, nearly wasn’t good enough.  First attempt I got the front wheel over, but not the back.  This might have something to do with my technique of slamming the brakes on when it hits the root, instead of keeping on pedalling.  Second time I bottled it before the front wheel hit the root.  Bah!  I don’t think the fact ‘Under Pressure’ was playing on my iPod at the time helped much.  Rest of the trail was fairly uneventful – 13 was a bit damp, looking forward to it drying out, but 14 and 15 were riding particularly well.   16 was better than expected, not nearly as churned up as I was expecting, and…well, say it quitely, but I’m getting quite fond of it.

Trail: Follow the Dog (excluding section 7, which is closed for maintenance)