Had a bit of a trail building fail today.  Fully intended to do our bit, but unfortunately set out a bit later than planned – for some reason, my mom was quite insistent that we check on the state of the spare fridge in the garage…

We turned up at Swinnertons at 10.15, quarter of an hour late.  The Chase Trail chaps had already set off, and the guy in Swinnertons said that they were planning on going up to the old section 8.  So, I speeded through section two, and then took the fireroads to the start of section 8.

Unfortunately they weren’t there, so I waited for a little while, and nommed some Fruit Pastilles.  Decided it was best to keep riding, and perhaps I’d catch up with them on another part of the trail.

I was riding section 8 quite well.  I’ve been making a conscious effort to lay off the breaks and relax more, but I was perhaps a bit too relaxed.  I took a corner a bit too quick (or rather turned a bit too slow), and went wide into some mud.  I’m not entirely sure what happened next – I’m assuming that I panicked and tapped my breaks.  I’m assuming this, as I can’t think of any other way my bike would come to an abrupt halt and end up in a tangled heap behind me as I went over the handlebars (I think!).

I got up, made sure that everything still worked and was intact (both for the bike and rider), and carried on riding.  I was a bit shaken, but I actually felt better riding the remainder of section 8 than I did yesterday.  Perhaps because I’d had a nice rest on the floor.

Rode the rest of the trail without incident, actually overtook some people that weren’t small children, rode 16 without clipping the bars again.  I rode the two sections I’d missed first thing (6&7), chickened out riding down the start of 6 to the bridge.  I also avoided the boardwalk and took the chicken run, as I was starting to get some interesting aches from my previous faceplant adventures.

After that, I’d got some time to kill before meeting Mr Toast at the café, so I generally pootled about, attempting to ride down section 3 (one of the old abandoned sections that I used to really enjoy), but failing rather spectacularly.  No, I stayed on the bike, I just couldn’t find the ruddy trail – there are so many branching paths now, and I inevitably picked the dullest, most straightforward one.

Met Mr Toast at the café, snaffled food, and set off on an afternoon ride.  Bumped into Rob at Swinnertons, who told us that the ramp leading off the bridge at the start of section 6 had been made a bit easier due to the number of people coming off on it.  Suddenly, my knew found grace and skill on that feature was explained.  Although it’s good that people’s safety is taken seriously, I would have liked to have gotten genuinely good at riding it (as opposed to riding it with the elegance of a three legged donkey) before it was nerfed.

After section 2, I’d decided I wanted to do the green loop, as I decided that a) it was a nice day to see more of the Chase, and b) I’d acquired quite enough interesting bruises for one day.  But first – I couldn’t allow the entry to the bridge on 6 to become another NEMESIS.  So, I decided to give it a shot.  I rode down the slope…and onto the bridge.  And then rode along the bridge, and off the end, without incident.  Not terribly exciting, but at least I know I don’t have to be stupid about it now.

Green loop was suitably lovely, if busy with families and dogs.  The Canadian Goose family I’d seen the other week were present, with the goslings being slightly larger and more goose-shaped than before.  All in a big pile! 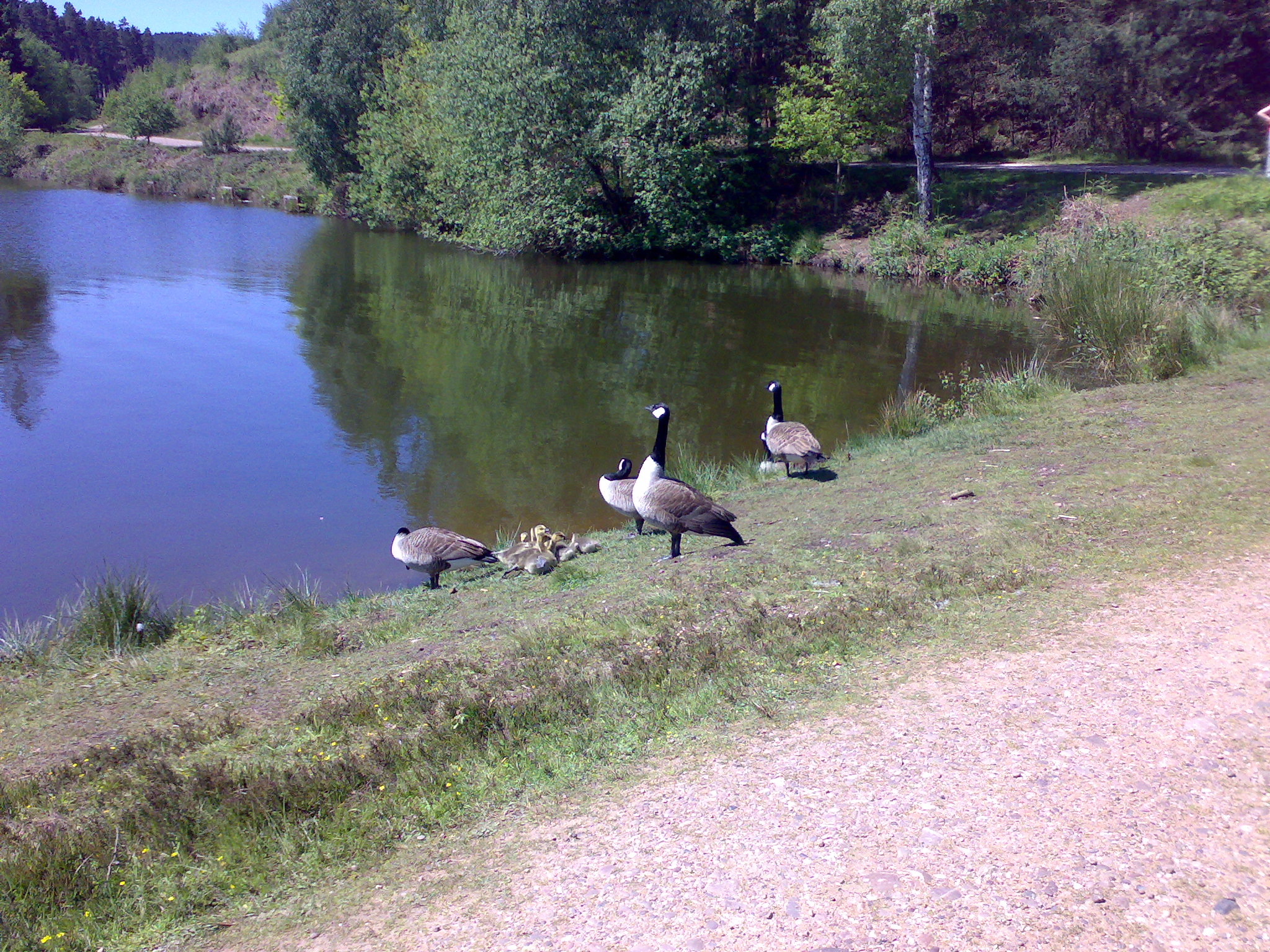 We’d gotten about halfway around when there was a loud CRACK from Mr Toast’s bike.  His rear wheel had broken.  Again.

There was quite a lot of swearing, and the Zaskar (and its XT wheels) were dragged back to Birches Valley.  Once we got home, he took the hub apart, and found that the ball bearings in the hub were smashed – the coatings were broken.  There was more swearing, but he eventually realised that he had two broken XT rear wheels – both broken in different ways.  By cannibalises the old Meta wheel, he could fix the Zaskar one.  Weeeee!

He also decided to keep the rim off the cannibilised wheel, which involved him manically cackling as he took a hacksaw to the spokes.  From the remains of the destroyed hub, he created a beautiful sculpture!

Highlights: Getting a good long ride in the sun, doing the slope on the bridge at the start of 6

Post ride food snaffled: Had a ham and egg salad sandwich baguette and a cookie for lunch