It was hard to believe that the NPS race was only a week ago.  Last weekend had torrential rain, harsh winds, and generally crap, miserable and grey weather.

This weekend was glorious, with blue skies and baking sunshine – if only it had been like this last week!  To give you an idea of how warm it was – I went out without legwarmers and left my thermal jersey in the house for the first time this year!

Before heading to the Chase, we had to go to the Specialized Concept Store in Brum to pick up my proper saddle, and also to spend some of our Spring Reward Voucher.  I got a couple of new jerseys, the Arona and Stella ones, and Mr Toast got some new SPD shoes, as the straps on his old ones are about to give up the ghost.  As an aside, here’s me modelling the Arona jersey.  I was quite mortified when I saw this picture, as I didn’t realise how Dame Edna Everage the glasses looked.  I’m sure they don’t look that stupid in the mirror… 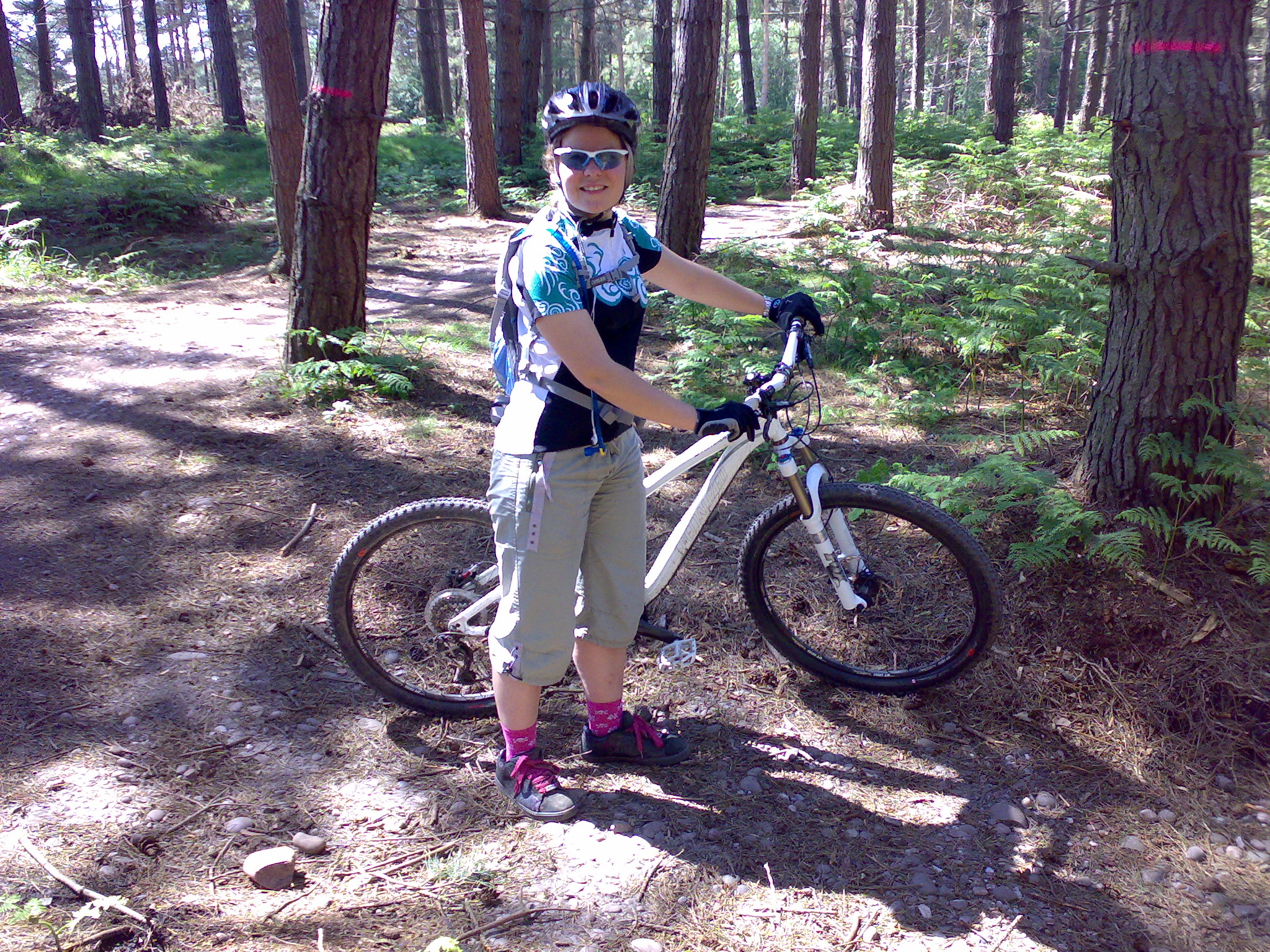 It was a bit of the pain in the arse getting to the Concept Store – there had been a bad accident, and a few of the routes to Fort Dunlop were closed.  The remaining ones were absolutely rammed with traffic, so it took us ages getting both in and out – we didn’t get to the Chase until nearly 3pm.

Got onto FtD, rode section 2 stupidly fast.  Walked down to the bridge at the start of section 6 like a big cowardly, cowardly custard.  Rode the bridge, and marvelled as I rolled down the end – I did it a lot smoother than two weeks ago, it seemed particularly easy.

Did the boardwalk, no excuse no to when it’s dry and sunny.  My cunning plan for today was to conquer Evil Root Number One (on section 7) and Evil Root Number Two (on section 12).   Alas, I failed on ER01, I couldn’t muster the courage to attempt it – I just kept riding up to it and stopping.

Things took a turn for the worse as I hit the fireroad hill.  It was now past three, and I had the startling revelation that perhaps going for a ride on nothing but a bowl of Special K and no lunch was probably a bit of a rubbish idea.  Did section 8 a bit sluggishly, but picked up on the rest of the ride – think it was the Fruit Pastilles and ginger nut biscuit kicking in…

On section 12 Mr Toast caught up with me (he’d been off exploring), and we rode the rest of the trail together.  Evil Root Number Two managed to thwart me, although I nearly got over it – I probably would have done if I’d kept pedalling and put my weight forward a little, but I instinctively put my feet down just before the back wheel hit the root.  To be fair, it was the first time I’d even attempted to ride it since the ‘Small Child Incident’, which was actually documented in this very blog.  Over a year ago.  Oh dear…

I assure you, his days are numbered! 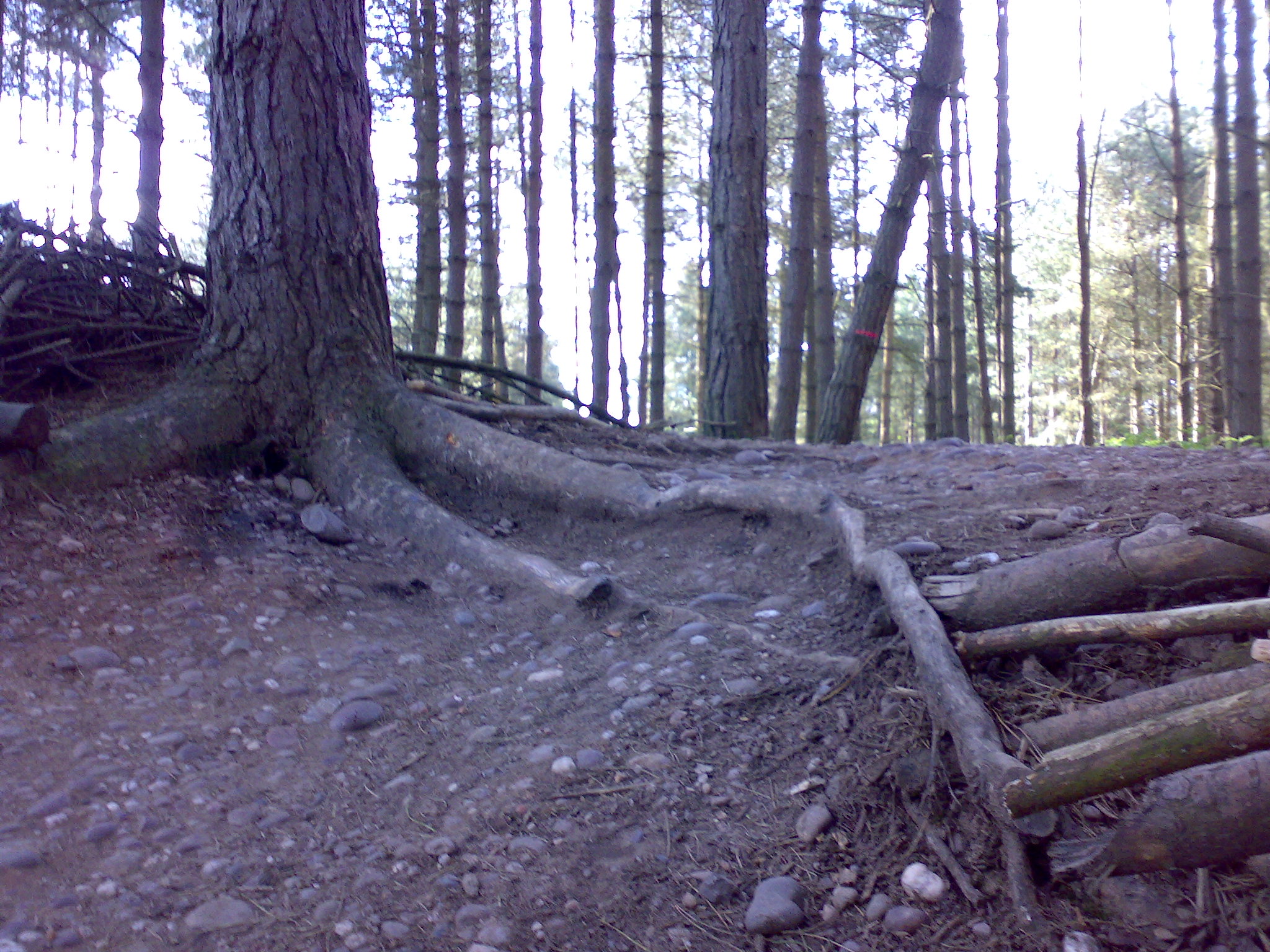 Rode the rest of the trail pretty well, and even managed to ride all of 16 without catching my handlebars once. Miracles do happen!

Highlights: Riding well at the start and the end of the trail

Bad bits: Running out of energy, only having a limited amount of water in the Camelbak

Post ride food snaffled: None at the cafe, but had a monster Chinese takeaway at my mother’s.

Good dogs seen: Best of the bunch was a husky and a minature black wire-coated daschund.