The NPS race was held at Cannock Chase over this weekend, and Mr Toast and I helped out marshalling yesterday’s events.  The NPS was founded by Pat “Mountain Mayhem” Adams, who’s known for throwing a good mountain biking party, and was held in association with Singletrack Magazine, aided and abetted by Chase Trails.  I like to point this out, just so that I can post these photos of pretty fluttering banners. Friday’s weather had been suitably bleak, with heavy rain taking its toll on the course.  Saturday morning looked far more promising, however.  Look!

This was the little drop near my marshal point, with a chicken run  an officially sanctioned alternative route. 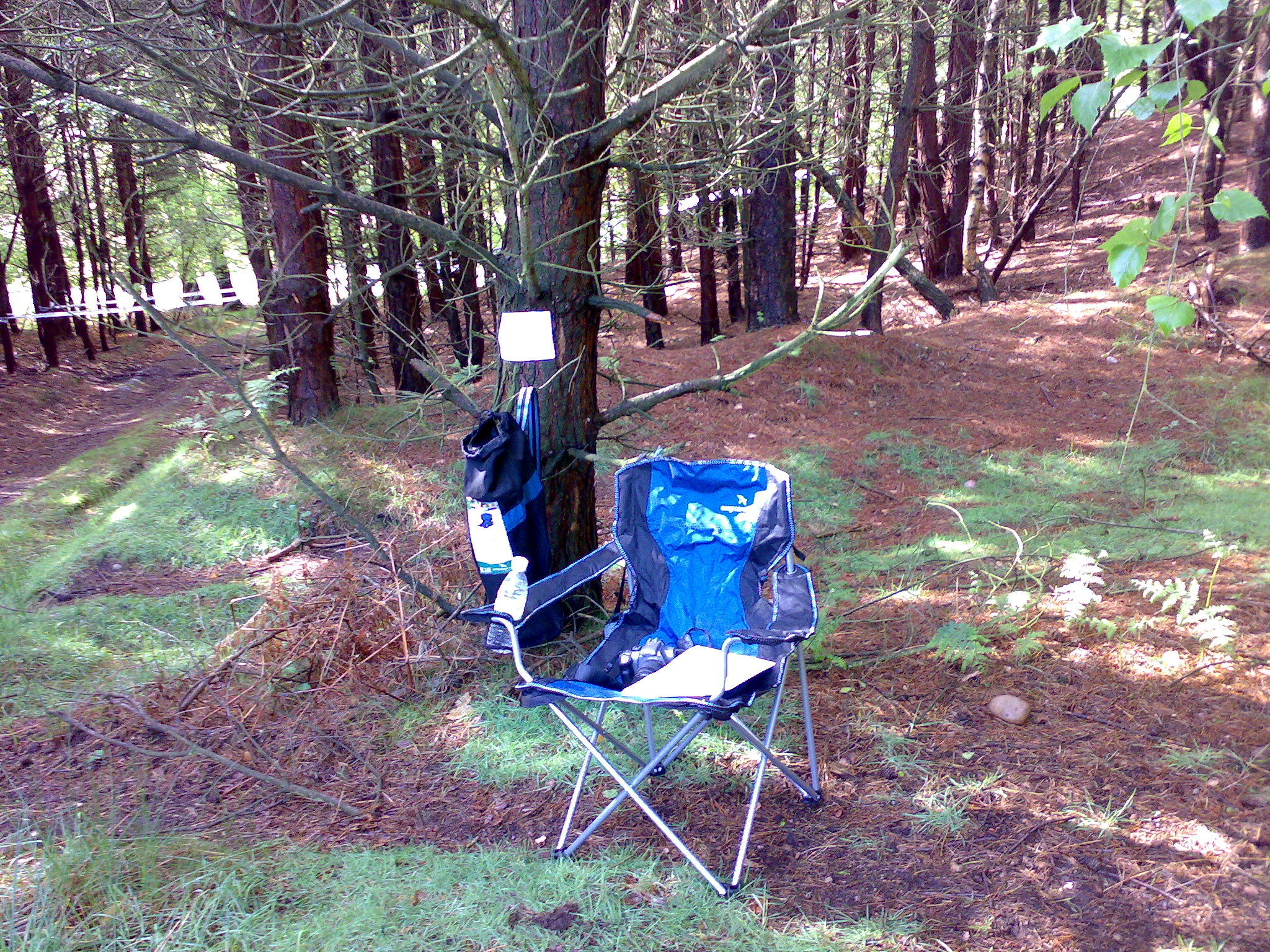 And this was my base of operations, which was in between outbound and inbound sections of course.  As a marshal, it was my duty to make sure that the riders weren’t getting into trouble, or trying to cut corners.  There were one or two stumbles caused by skidding in the mud, but no-one looked like they were even contemplating cheating.  Perhaps they leave that to the roadies? 😉

See the sunshine?  Nice, isn’t it?  Unfortunately, the weather was suitably schizophrenic, with episodes of torrential rain versus gloriously warm sunny spells.  For the most part, the day was grey and overcast, but not too cold.  And I should bloody hope so – it’s May!  I want a proper summer, 24 – 28 degrees minimum, and I want it now! Or at least for more than two weeks this year… Despite the iffy weather, all the racers were determined to give it a shot, from the super fast guys leading the field, to the more casual entrants slogging through the mud.  The race leaders were stupidly fast, and seemed to fly across the mud and any obstacle they encountered effortlessly.  All the riders deserved a huge round of applause though – hopefully next time they return the weather will be a little kinder!

Also a big round of applause to the Chase Trails chappies for building the course and for organising and  looking after the marshals.  Sharon and Dale’s culinary efforts were particularly appreciated!

I took a few photos, some of which are gracing this here blog post, and the rest of the best can be viewed in the gallery. I struggled a bit getting decent shots – it’s been a while since I’ve used my camera, and I mainly used to do amateur gig photography.  I did come to the revelation this evening that my gallery is mainly comprised of sweaty men…

There are also some rather awesome photos of the event on Rocketdog’s (possibly not his real name) Flickr, and the official race photographer Rob Crayton is also likely to have a few good shots! 😉