So, we got home, got our biking gear on, and got outside.  The aim was to pootle through the country roads until we got to Burton Dassett, which is pretty much the hilliest area around Leamington, as far as I’m aware.

The lambs were out in force, and we reflected how different they are to when they grow up.  Lambs – highly entertaining, bouncing, frolicking lunatics.  Sheep – they eat grass, shout ‘bear’ every so often…and that’s about it.  It’s like they get to a certain age, and they get lobotomised, with all trace of personality erased.  Which is shame, but probably for the best – it made me feel less guilty about the delicious lamb rogan josh I made after the ride.  Nom.

Anyhoo, I’ve been on a couple of pootles around the country lanes with Mr Toast before, but this was the first time I’d actually biked up Burton Dassett.  I think last time we got less than partway up before I threw a tantrum…

Got to the top, and took in the views.  Sometimes it’s easy to forget what we have on our own doorstep.  Admittedly, there’s not a lot of interesting trails around us, or even accessible bridleways, but as far as country roads, farmland and country parks go…well, it’s better than a poke in the eye with a sharp stick. 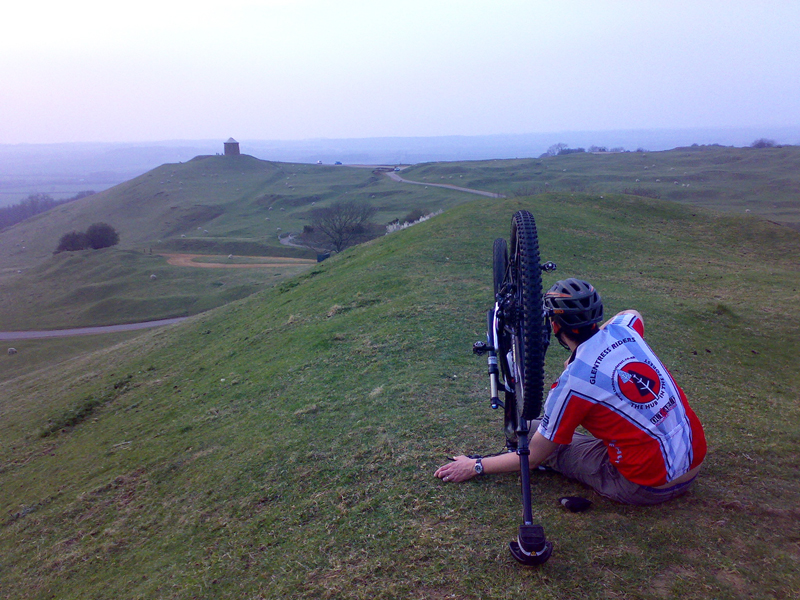 Naturally, when we got to the top Mr Toast had to spend a good few minutes fiddling with his bike.  Normally, excessive fiddling leads to complaining, then complaining leads to parcels from Chain Reaction and Merlin arriving at work.

Ride: Bishop’s Itchington to Burton Dassett – and back.

Highlights: Laaaaaaambs!  View from the top.

Bad bits: Getting my lace wrapped around my crank and nearly coming off my bike

Good dogs seen:  Four jack russells, all different owners.  Three were wire-haired, one was smooth.  Jack Russells, the dog for this season.