Had my first demo day of the year yesterday…and my first ride since my knee operation in September!  Even though the track was knackered and the weather was iffy, it was great to be back out again!

It was the MBR Demo Day, with Specialized and Giant in attendance.  It wasn’t quite as big an affair as last year, and wasn’t quite as well organised.  We got there about 1.45pm, and headed straight to the Specialized tent.  I wanted to give the Safire another go – ideally, I would have like to have tried sitting on both the small and the medium, but unfortunately bikes were going out as soon as they came in, so I stuck to the small.

The Specialized chaps checked the details – apparently the small Safire had gone out an hour beforehand, so was due back immediately.  “Come back at 2.10pm, we should have it ready by then”.

I can’t blame the Specialized guys.  Things might have run smoother if they’d had pre-booking like last year, and more bikes (I think there was only one of each size for each model), but I suppose they can only carry so much.  And really, shouldn’t people just, oooh, I don’t know…return the bikes when they’re supposed to? Demo days just seem a bit flawed in that respect, in that the demoing of a particular bike can be thrown out of whack for the rest of the day by one person being a selfish arsehole.  Of course, there could have been technical problems with the bike, or the person could have had an accident…but the previous rider looked fine. -_-

Anyway, onto the bike!  I have to say, Specialized staff continue to impress – despite the miserable weather and fraying tempers due to late returns, they were friendly, informative, and dedicated to making sure that every single person who went out got the best experience possible.  They adjusted the shock and the forks according to people’s weight, made sure everything was tightened up and the optimum height, and explained what kind of travel you should be looking for.

Unfortunately, the bike impressed slightly less.  Really nice rolling on the flat, lovely smooth gearing…but I just felt a bit perilous on descents.  It felt a bit too short,  a bit too upright – all in all, it felt like I was perched over the handlebars.  I don’t know if it’s the case that I needed to go a size up, or just need a bike with a bit more reach, but it just didn’t feel right.

That said, it was my first time on a bike in five months, I was riding with the saddle far higher than I would normally (ie a sensible height, as dictated by my consultant), and it was very, very muddy (Yay! Slidey!) .  It might just be that I need to give the Safire more of a chance and get used to biking again – especially on a different bike. 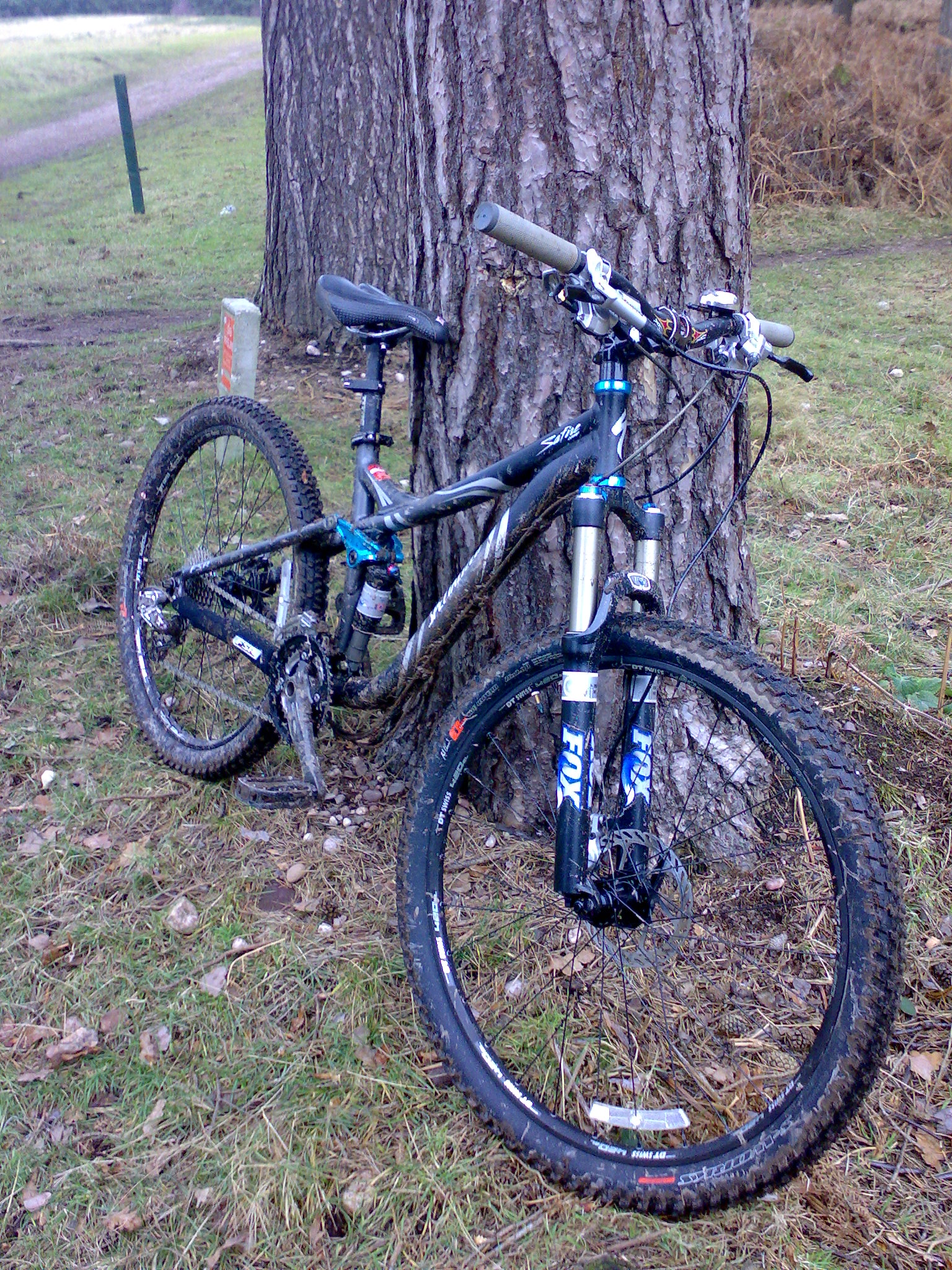 When I returned the bike (ON TIME), the Specialized chap asked me how I got on.  I was honest, and he had several suggestions.  He didn’t think that I should go a size up, as that’d be too big height-wise, but I could increase the reach by moving the saddle back – it was as far forward as it would go.  Might have to see if I can demo one from the concept store in Brum and give it a go when the weather’s better and I’ve got my confidence up again.

Trail: A little bit of Follow the Dog, some green routes

Highlights: Being back on the bike for the first time since September!

Bad bits: A wee bit too muddy in parts