Spent rather a lot of time up the Chase today. It was a Singletrack demo day, so I tool the opportunity to try out some new rides – the Specialized Safire Expert, and the Giant Anthem W.

Got to Birches Valley just after 11am and the carpark was PACKED. It took two circuits before we were lucky enough to drop on a space – I’ve never seen it that busy before! The first bike I tested was the Specialized. The Specialized guys were great, really thorough in setting the bike up for me, making sure the rear shock and forks were of the appropriate squodginess, and explaining how they worked and the different settings (knowledge which I needed, as I have a hardtail with a basic fork). They even got a different saddle for me with a shorter seatpost, as I tend to have mine so low because of being a noob.

The Safire rolled really nicely, and the suspension was smooth as butter. However, I was a bit disheartened that it had the turning circle of a rusty piano. At the time I thought I’d somehow forgotten how to steer, but Mr Toast explained to me that they do turn slowly because of the ‘slack head angle’. Again, the handlebars were quite a bit wider than I’m used to, so it did feel very sluggish on tight corners. I think it’d just be a matter of getting used to it, perhaps – the long swooping sections were awesome fun.

Unfortunately, we arrived at the Chase late, and as mentioned earlier, the Specialized guys were very particular, so it meant I had less than half an hour on the bike. I would have loved to have taken it on Section 13 or Ill Phil’s Hill, but only managed the first three sections. But I wanted to get it back so it wasn’t late for the next person, and in any case, I had the Giant booked. 🙁

Which brings me to the Giant Anthem W. The Giant stand was quite amusing, with a forlorn-looking Basset Hound called ‘Wilma’ moping around. Wilma was being kept under close supervision, as apparently she had earlier gorged herself on the stand’s supply of Nutrigrain bars. The bikes were also named, rather than numbered. The standard bikes were called things like ‘Trixie’ and ‘Roxy’, whereas the women’s bikes were more sensible named ‘Albert’ and ‘Alfie’. I was waiting for Alfie. And I kept waiting. 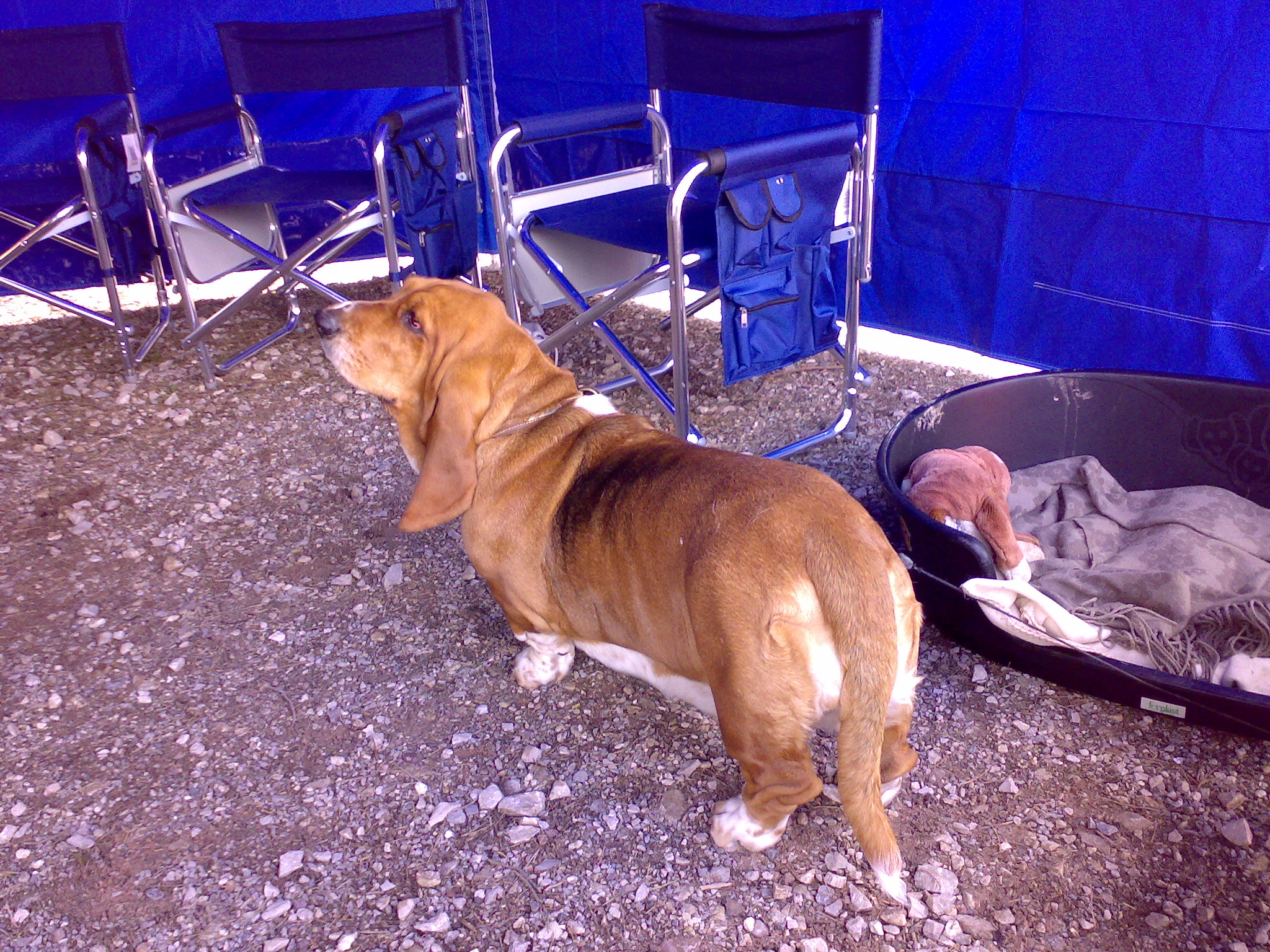 Unfortunately, Alfie came in over half and hour late thanks to his previous rider, which meant that after the bike had been cleaned and set up, I had twenty minutes on it. The Giant chap confidently assured me that the Giant Anthem had better suspension than the Safire, and that I’d find it more responsive. He also mocked how low my saddle had been on the Safire. “Your knees were be up by your ears!” I explained that I have the saddle low as I’m fairly new to mountain biking, so want to be able to get my feet down quickly, plus I find it easier to move my weight* around with a lower saddle. He didn’t seem convinced.

The Giant…well, me and the Anthem didn’t make friends. I felt a bit more comfortable with the geometry than the Safire, and the handlebars were narrower, like my Trek. However, the thing road like an epileptic donkey. It was very, very twitchy, and I found taking tight corners even tricker than the Safire, but for the opposite reason. The bike was also skidding and sliding all over the place, and I thought, ‘Holy crap, I haven’t felt this uncomfortable on a bike since I first started biking’. As I finished the test ride, I realised that the source of my woes was probably that the tyres were pumped to a far higher pressure than I’m used to, as well as being narrower. I think someone who’s more experienced and a lot speedier would probably get more out of it than I did, but I was just left pining for my £400 hardtail.

The café was packed, so my lunch consisted of a lonely Tunnock’s Teacake. 🙁

In the afternoon I did the Dirt Divas course. If you’re thinking about doing one of these, DO IT! It was fantastic – I was in the intermediate group with Jacqueline, and I learnt a surprising amount in two hours, and performed my first (very small) jump over a branch. Unfortunately, after a morning of intense test riding, my already feeble levels of fitness started to flag, and my knees were KILLING me. I’ll definitely do a Dirt Divas course again, but I’ll wait until I’ve upped my fitness levels first! I went to the café, utterly paggered, for a slice of cake and a nice cup of tea.

I desperately wanted to sit down and to drink a non-Camelbak beverage, as I’d started to feel rather nauseous, but I was waiting for my tea. Unfortunately, it took a while, and I ended up throwing up. In public. In the café. On the plus side, I actually managed to hide it as a cough, contained it in my hand, and grabbed some serviettes. Stealth vomiting skills – a new talent!

Highlights: Dirt Divas training session, trying out different full suspensions, pushing myself to the very limits of my fitness

Bad bits: Pushing myself the limits of my fitness to the point where I throw up in public, having my Anthem test ride time cut very short thanks to some cow returning it late.