Sorry about the delay, but finally you will know the answer to the question you’ve all not been asking: Did we  win Sleepless in the Saddle.

The unsurprising answer is ‘No’.  We came in the bottom ten, I think.  But not last! \o/

Thankfully Sleepless was infinitely more enjoyable than Mountain Mayhem (which wouldn’t have been that hard, admittedly).   I was out third for the Chase Trails Pixies – after Mountain Mayhem’s epic five hour plus lap, the team decided to give me a fighting chance of coming back in daylight.  The weather was decent, our first riders out seemed to be enjoying themselves, and everything looked so promising… 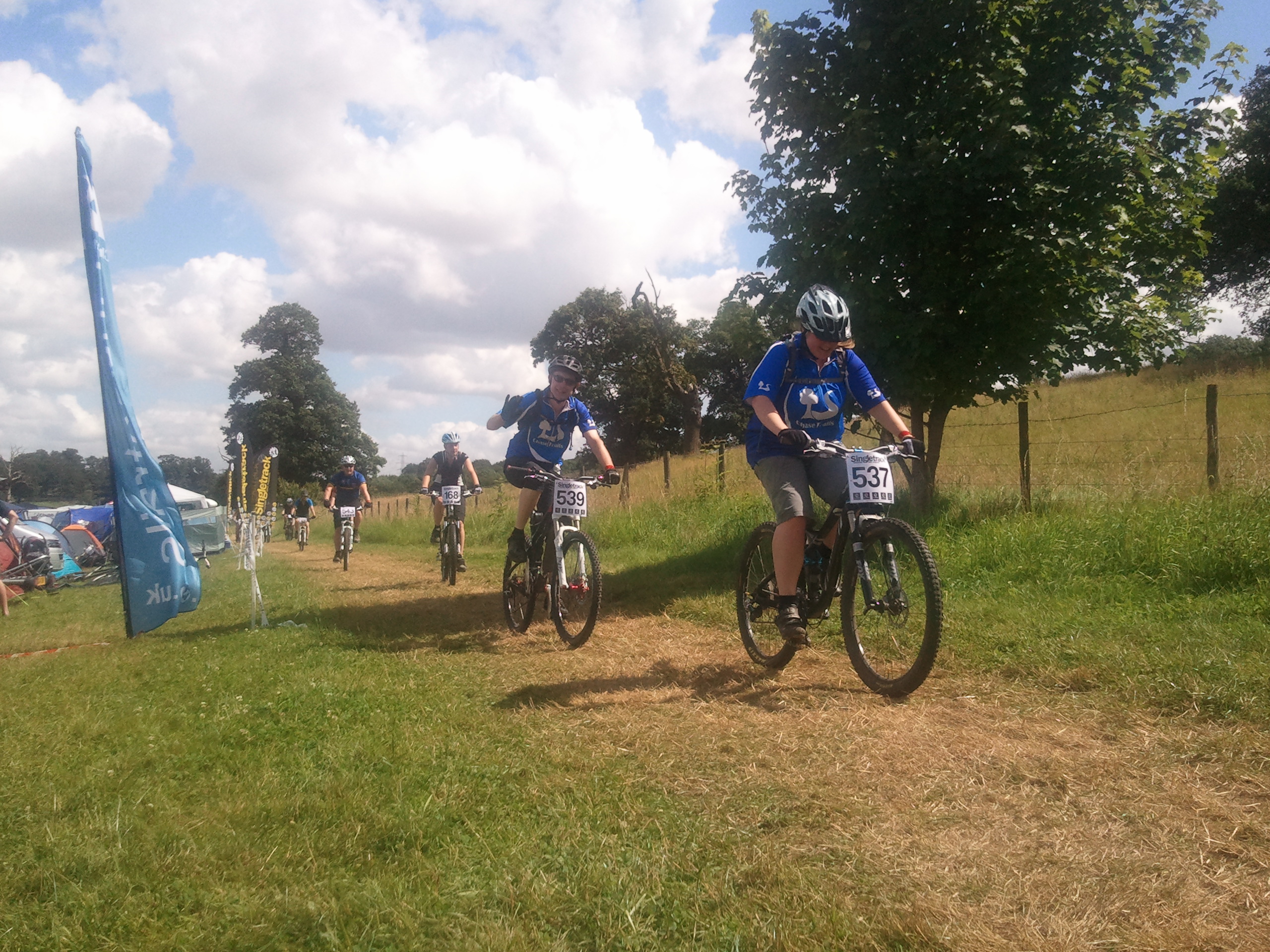 I’d been somewhat hesitant over Sleepless – after Mayhem, I was worried it was going to be another horrible, muddy slogfest.  I consoled myself in the knowledge that, as Sleepless laps were shorter and flatter, they couldn’t possibly be as horrendous.  Fortunately, I set out in glorious sunshine, and my first lap was genuinely enjoyable.   I’m fitter than I was last year, and I found the woodland sections really good fun.  I even overtook a couple of people.  HA!  And, for the first time, I was captured in my full racing glory, which revealed that a) I’m as pink as a flamingo, and b) the older I get, the more I look like my nan.  I think the Dame Edna glasses help that… 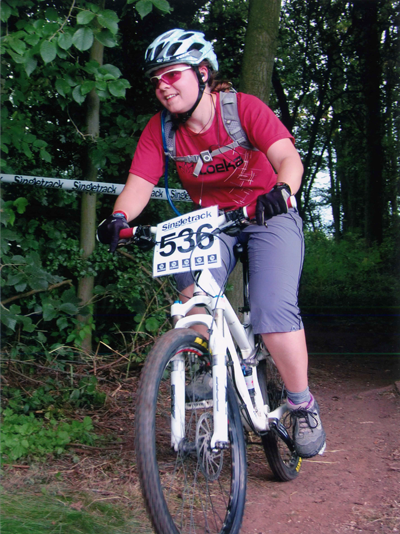 Camelbak, MP3 player, and a full susser – I think I scored highly on the Weekend Warrior scale!

However, as was expected, the rain came during my lap.  Just before the off-camber section, the drizzle started, then turned into a full scale torrential downpour.  The off-camber section had been described to me by my teammates that had already gone out as being ‘very loose and dusty’.  By the time I got to it, it was a mudslide.  I was in the process of trying not to slide off the track when who should come a-riding, but THE HUSBAND!  He checked that I was OK, and cheekily declared that he knew he was getting close to me when the rain started.  Feeling somewhat superstitious about my ability to destroy the weather, he sped off into the distance, sans wife.   The course fortunately stood up to the sudden downpour a bit better after that point, and I finished my first lap with a big grin on my face.  Huzzah!  I clocked in at 1 hour 24, which I’m fairly certain I could have done faster if it hadn’t have been for the meddling weather.

My second lap was due at around 10pm.  Despite the fact the one hour downpour had turned the track to sludge, I didn’t feel too apprehensive.  After all, I’d spent hours sliding around Mountain Mayhem in the dark, so I was used to this kind of nonsense, but this time I would have lights!

However, Mr Toast was a bit more concerned, and was trying to persuade me not to go out, pointing out that I’d already proved my stubbornness and stupidity at MM. I was fully reared up and ready to go though… but as I waited, I saw bike after bike being pushed or carried over the finish line.  Petra, a better rider than me, wasn’t back, obviously ‘enjoying’ the course. So yeah, maybe another muddy night lap wasn’t such a great idea.  Back to snuggling in the tent then.

The next morning I got up early (miracles do happen) and set out on my second lap just after Bruce came in.  Again, it started of relatively well – I flew down the first descent at speed, not through any sense of skill or fearlessness, but because I knew that with the mud I’d probably lose control of the Professor if I braked.  I managed to stop at the bottom, just ahead of the fence that hosted a bunch of slightly startled-looking spectators.  The short climb that followed was a mud pit, but the first couple of sections were fine.  Then it all went to hell, and became a muddy, unrideable mess for a fair few sections.  I stopped frequently to scoop out the mud that was collecting in my frame. It was a bit of a slog, but still more bearable than Mountain Mayhem, and the last section was fine – I was even able to get up some speed on it, flinging the mud off my tyres.  It added an hour to my previous lap time, but I wasn’t too fussed.

So, this year’s 24 hour racing has been somewhat of a disaster.  Sleepless was good fun, but it was gutting how one hour of (admittedly very heavy) rain trashed a good chunk of the course, even leading to one section being closed.  I would have like to have done a night lap like last year, but not in this year’s conditions.  Not sure what we’ll be doing next year – I might give Mayhem a miss and sign up for Sleepless nearer the time, and give that a miss if it’s been raining for two months beforehand!  People can be a bit smug and dismissive, but I ride to have fun, and walking through mud pushing a 50lb bike isn’t fun for me.  🙁

Still, got a medal and a couple of race numbers out of it! \o/ 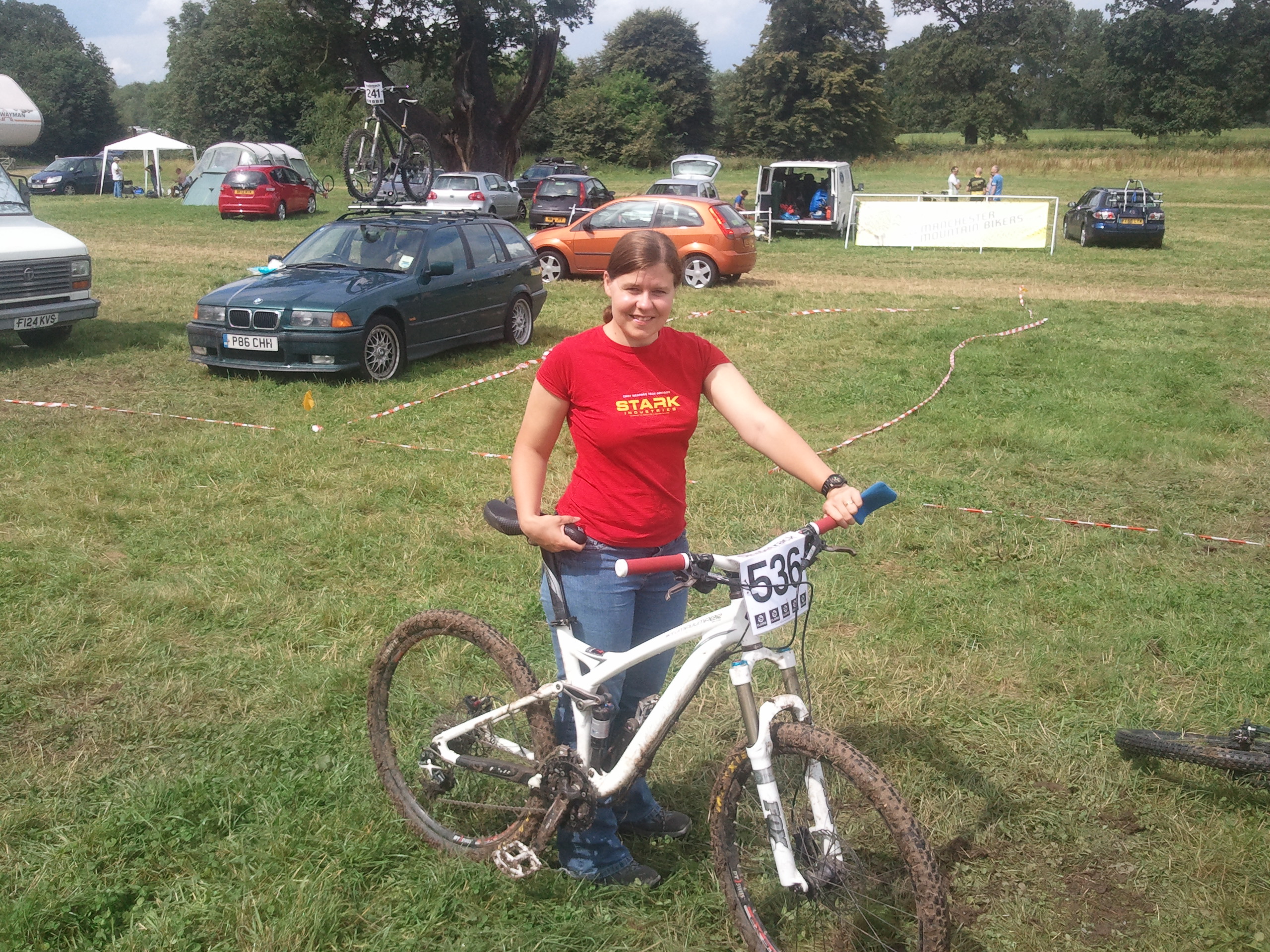