If you find obscene language to be distasteful, you may want to navigate away from this page now.  May I recommend Cute Overload?

For those of you that aren’t averse to a bit of profanity, may I warn you that Nissan Micras are a big pile of bollocky wanktoss.  I believe that I may have mentioned previously the chronic unreliability of my Micra, and today it once again reared it’s French head, gave a bit of a shrug and went on strike.

Perhaps I should have known today was going to turn out like this.  First thing this morning, we realised that the central heating had packed in, but things were looking up.  It was sunny!  Mr Toast’s new bike (a brown cyclocross bike, let’s not talk about it) was available for collection!  And it was dry enough for the precious Ibis Mojo to have it’s first outing on the trail.

We headed to the woods, and were just exiting Bassets Pole island onto the A38 north when BUMPF!  Something…went.  The engine lost power, the car had an aroma of burning, and we pulled over.  Bikes were taken off the car (safety first!) and we waited at the side, phoning the AA.  Fifty minutes later the AA Man arrived.  He was indeed a very nice man, and very knowledgable about my car (he used to work for Renault, apparently, and as we all now know, Micras are secretly French).  Initially the problem seemed to be that there was a huge chunk of metal sitting in the engine that had sheared off from somewhere, but it turned out this was merely a bracket for…something, and actually completely unrelated.

The actual problem was the cam belt, which had failed in spectacular fashion.  Unfortunately we won’t know the full damage until Monday – we couldn’t get it to a garage as the recovery truck took another hour and a half, by which time everywhere was shut.  But we were told that if we were lucky, it could just be that replacing the belt will fix it.  If we’re unlucky, it’ll have knacked all of the valves, and require a complete engine overhaul.

To add insult to injury, once we got home, the Micra’s central locking system utterly failed – the car stopped responding to the key, and we can’t lock it.

I hate you Nissan.  Because of your shoddy stealth French engineering,  instead of spending a beautiful sunny day zipping around the woods, we sat at the side of a dual carriageway for over three hours.  And this was the only air that the Professor and the Mojomalo got: 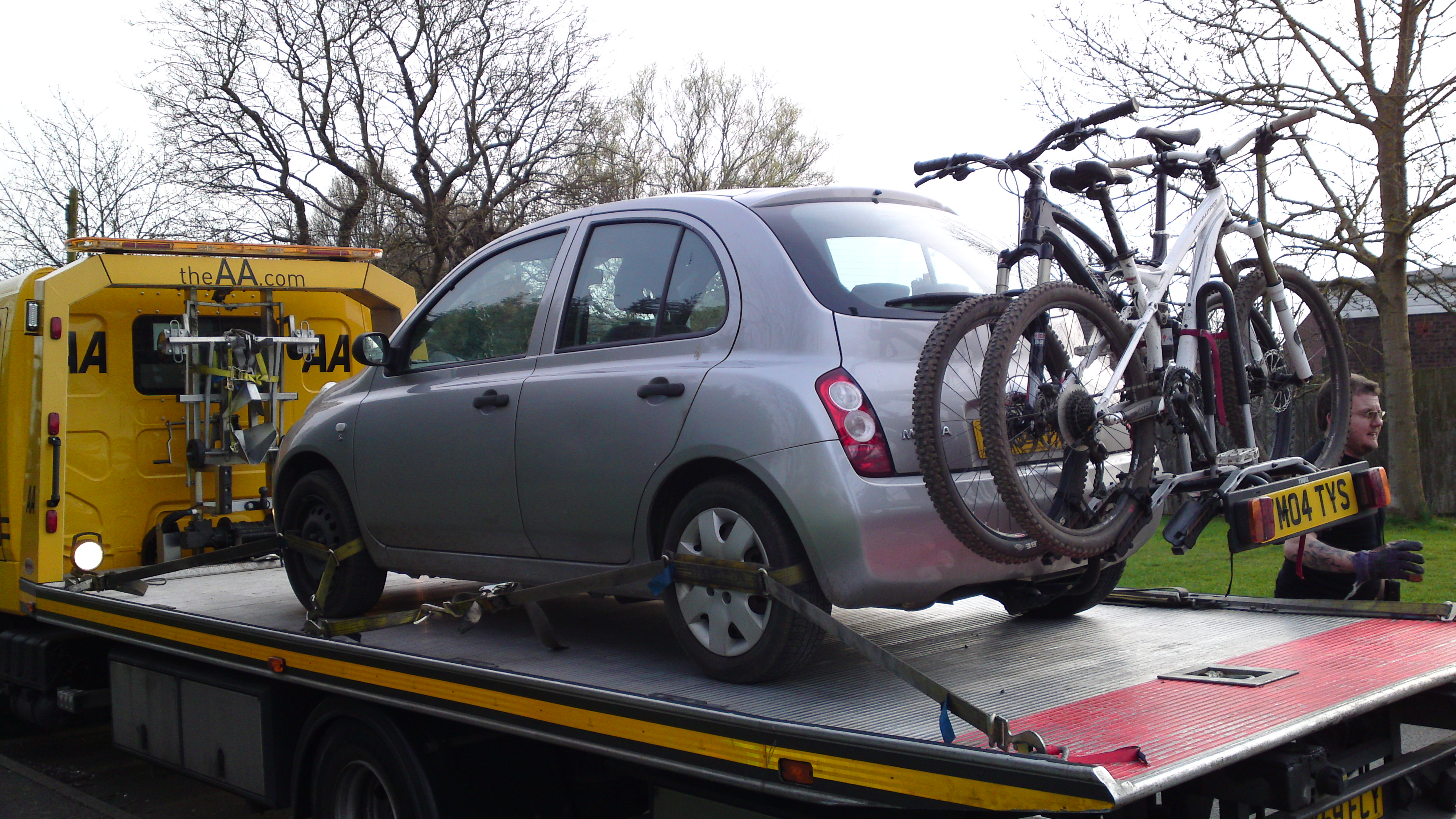 Ride: The back of an AA truck, because Nissan Micras are rubbish

Trail: None, because Nissan Micras are rubbish

Highlights:  There were some interesting butterflies, and the AA men were nice blokes.  This does not ease the pain of the Nissan Micra being rubbish.

Post ride food snaffled: A Chinese takeaway, seasoned by my tears caused by the Nissan Micra being rubbish

Good Dogs Seen: None, because the Nissan Micra is rubbish.