It was the Bike Radar Demo Day at Cannock Chase today.  Unfortunately, there’d been a bit of confusion in the booking system – originally attendees were supposed to book online, then after a fair few weeks those booked bikes were cancelled, and there was a hullabaloo!  I decided to forgo the delights of the Demo Day and just take the trusty Professor to the trails.  Being rather short of stature, I know that bikes suitable for my height are in somewhat short supply, and I just wanted a good ride, rather than 25 minutes here and there with loads of waiting in between.

Unfortunately the Demo Day put a bit of a dampner on my ride.  The first couple of sections of FtD had been marked as the demo loop, so it was a lot busier than usual.  This meant a lot of disruption – having to pull over for faster riders, but also being held up by slower riders, who had a disconcerting habit of stopping abruptly on small climbs, and abandoning their bikes in the middle of the trail whilst snacking.  There was also a noticable increase in the amount of litter on the first couple of sections – it was enough to make me a little bit Royston Vasey!  “This is a local trail for local riders, there’s nothing for you here!”  Then I realised I was being a bit of an elitist prick, so carried on doing my thing.

My ‘thing’ involved successfully negotiating the exit of two again.  At least, it would have done if a Cairne terrier hadn’t decided to run right in front of my wheel and stood fast, barking at me.  I put my feet out on the rocks of either side, and ended up gingerly mincing around the slightly cross pooch.

I got to the top of the hill towards eight, and there was a huge group of people.  I didn’t much fancy doing eight when it was so busy, so I carried straight on towards nine and onwards.  My performance was a bit lacking compared to last week, a combination of feeling a bit rough and the trail being a bit muddy.  I have to admit, I’m not a fan of mud, it saps me of both speed and confidence.  I’d planned to hit the green/now blue route once I got to the start of 13, but I felt oddly drained.  I finished the rest of FtD without incident, with the exception of the odd skitty moment involving mudslides into trees.  I went to the cafe for a cup of tea, feeling a bit queasy.

I’d still got plenty of time left before meeting up with Mr Toast (who was demoing bikes), so I generally pootled around, revisited the old 3 & 4 sections, and returned to the Demo Day area.  Mr Toast was riding around on a bizarre contraption: 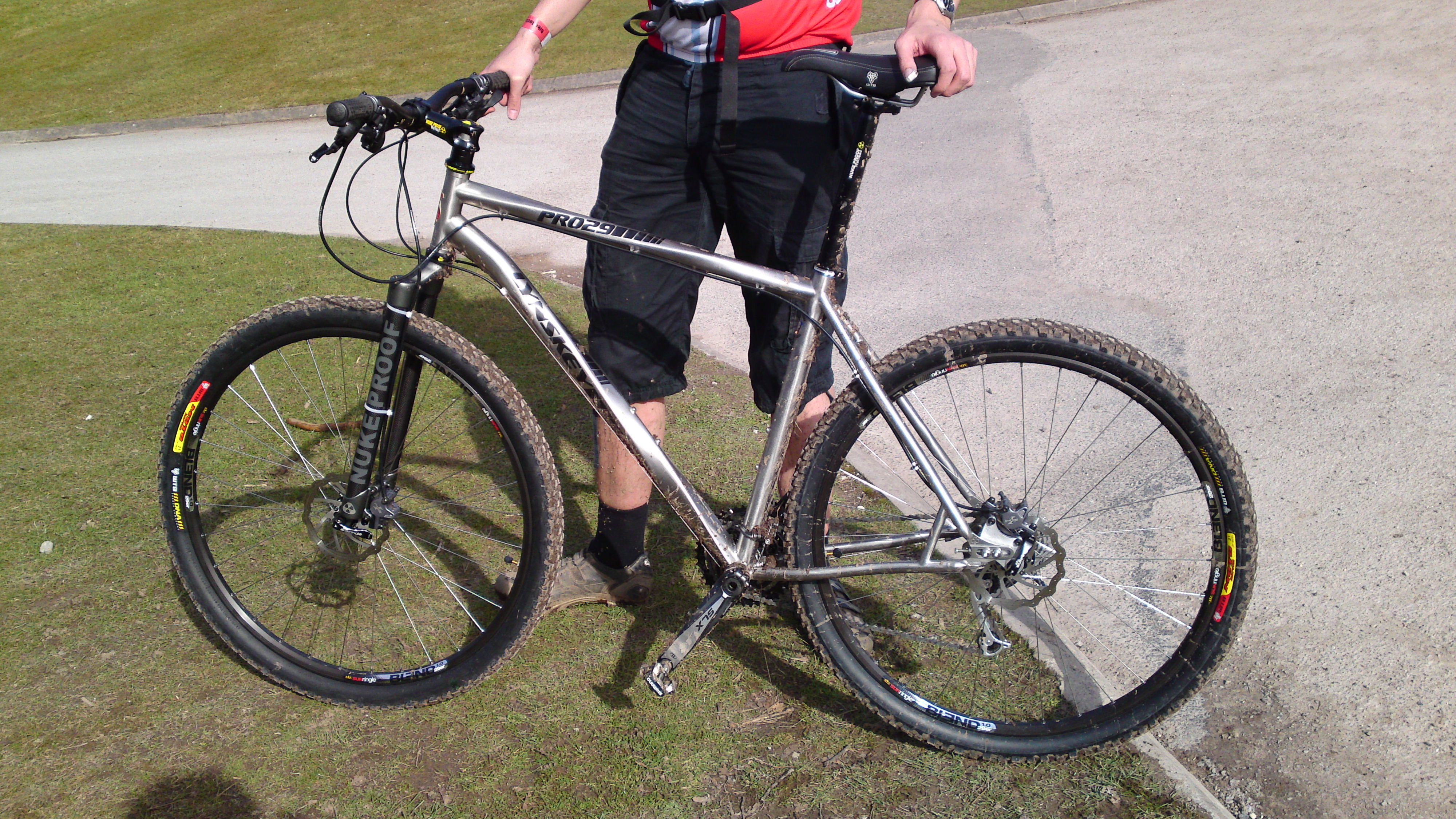 What’s that, I hear you ask? It’s a Lynskey Pro29.  29 inch wheels!  A rigid carbon fork!  A weird twisted frame!  Bizarrely the proportions actually look fairly normal on a 20.5″ frame.  Apparently the handlebars were also incredibly wide, which caught Mr Toast by surprise as he darted between two particularly close trees – catching the bars (and his knuckles!) on one tree, then being knocked into the next.  He stayed on, but marvelled that the only real accidents he’s had mountain biking have been on 29ers…

And yes, he still wants one!

I’m looking forward to the trails being a bit quieter next weekend – we’ve got friends coming down, and they’ll be sharing the delights of the Chase whilst they’re here.  I imagine these delights will possibly involve the two gents (Toast and Jaggy) attempting to kill each other via over-competitiveness.  And possibly Wacky Races style shenanigans…

Highlights: Getting out riding, good dogs

Bad bits:  The trail being so busy, missing section 8

Post ride food snaffled: Tea, cake and a packet of crisps.  It was a very green meal… 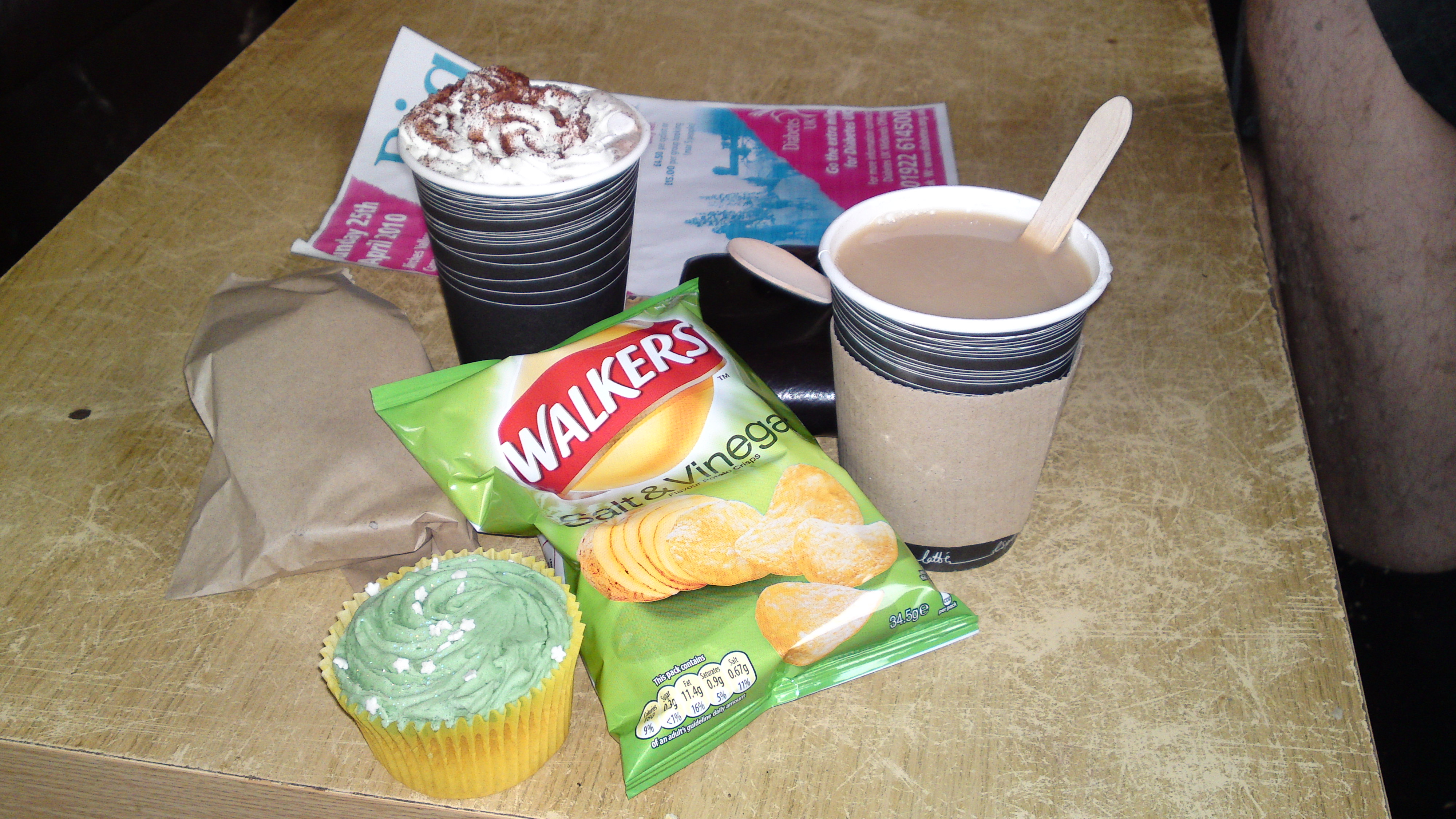 Good dogs seen: Ah, now we get to the good stuff.  There was a creature that looked like a Daschund-Jack Russel-Papillion cross, that seemed to be blind in one eye and barking at everything.   A husky pup, who seemed to have a longing for flapjacks.  Numerous Jack Russells of pleasing proportions.  A Lakeland Terrier.