So, over the past few freezing weeks we’ve been hibernating a bit, going progressively more stir crazy.  On the plus side, I’ve finished Bayonetta, got most of the way though Darksiders, started Miles Edgeworth Ace Attorney Investigations, and managed to hit over 9000 dps on my WoW rogue.

On Sunday, however, the sky was a funny colour.  After much scratching of heads, I eventually recalled that this colour was ‘blue’, and that glowing yellowy orb was ‘the sun’.   We’d already decided on Friday that we’d go biking on Sunday ‘no matter what’, so the fact the weather was actually pleasant was a winner all around.

In addition to being the first time back on the bike in a fair few weeks, it was also my first Follow the Dog effort of the year – and the first time since November!  We got there about one, and the car park was rammed!

I was very shaky to begin with, and with it being very busy (ah, the sun!) I was having to pull over quite a lot.  Didn’t ride the end of two, as there were people about.  Six and seven were closed, so we (‘we’ being Mr Toast and myself, he decided to take it easy) pootled along the diversion to eight.  I was quite pleased I rode up the big hill, and mostly in the middle ring (mostly!).  I actually seemed to go at a fair pace – faster than it takes Lita Ford to belt through ‘Kiss Me Deadly’, anyway.  At the top of the hill we took a breather, and I took a couple of pictures with my new phone.  They’re now in widescreen! 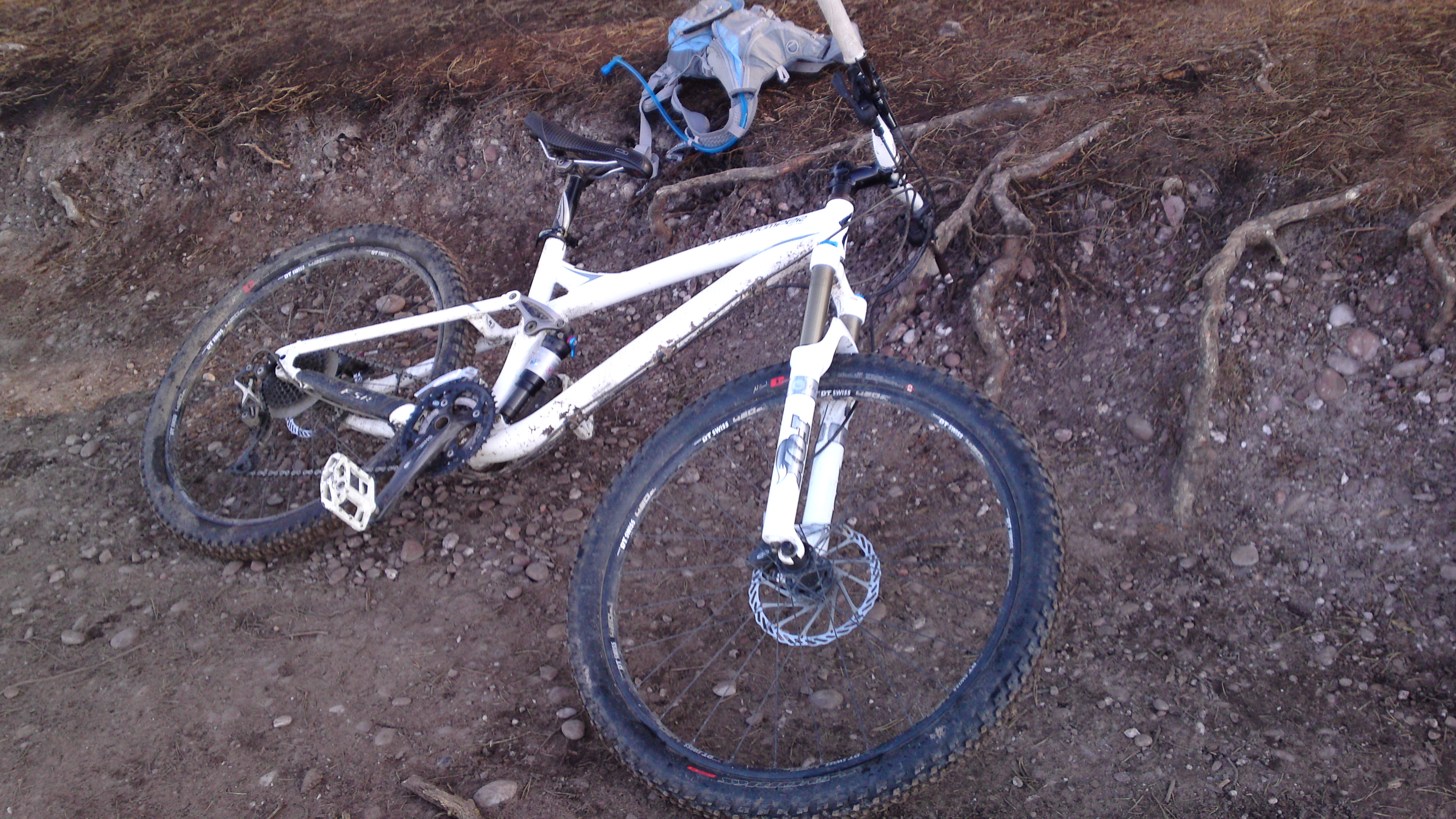 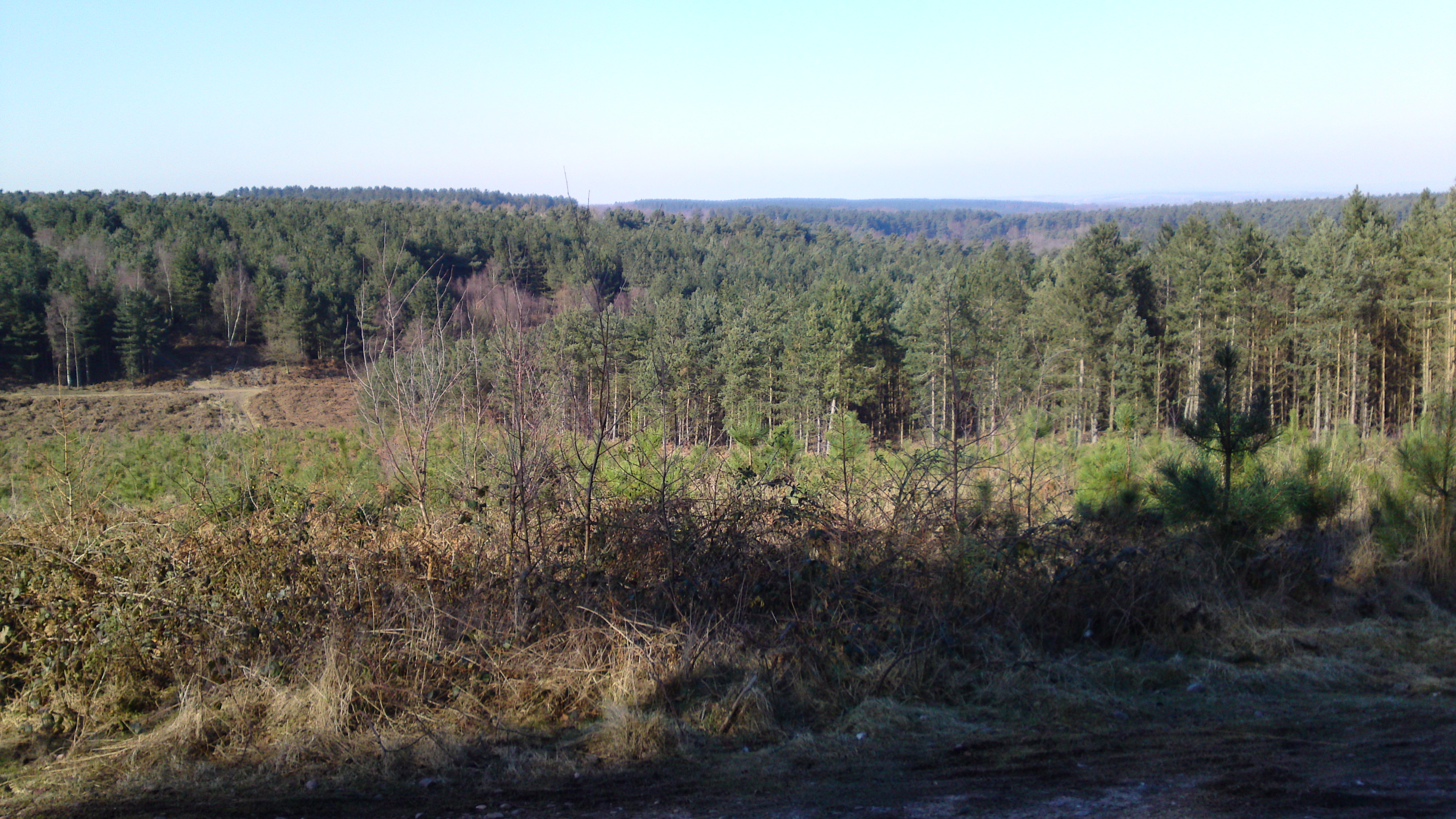 Fortunately by the time I got halfway around eight, I was feeling a lot more confident.  Rolled over the jumps in an even more half-arsed way than usual though, and didn’t ride the exit (there were people about!!!)

9, 10, 11 and 12 all went fairly well, although I nearly came a cropper on the one section.  I was being approached from behind by a much faster rider,  and went to pull over to the left on a flattish bit – unfortunately Speedy Gonzales decided he was going to overtake on the left.  No harm no foul though, he missed me and sped along.

With it being alot drier than it has been over the past few months, I took section 13 a lot  faster than I have for a good while, and it felt great.  By this point though, my energy levels were seriously flagging.  Got partway around 14 before having to pull over for a group, and suddenly felt exceptionally flimsy.  And lo, I did vomiteth on section 14…before I even got to Ill Phil’s Hill.  Felt better, but started to feel increasingly spaced out over the remaining sections.  By the time I got to 16, I felt decidedly surreal – I was weaving through the trees with perfect control and balance….but incredibly slowly.  Then a faster rider (there were a lot of them…) approached me, and I pulled over.  Unfortunately I was on a hill, and could I get going again?  Could I hell.  Walked to a flatter bit, got back on the bike, realised I was actually right near the end.  Got to the cafe, narrowly avoided passing out in the queue.

Although this entry might make the ride sound hellish, I absolutely loved it.  Loved being outside, loved being back on the  bike again, loved marvelling that chihuahuas are actually the same species as huskies.  I need to get back into the swing of things again and reclaim my lost fitness, but hopefully that shouldn’t take too long!

Good dogs seen: Chihuahuas – do I like them or not?  I can’t quite decide.  Definitely like huskies, minature schnauzers and minature daschunds, all of which were present and accounted for.