Today I felt rubbish, for no real reason.  I just felt a bit tired and sluggish, and could have quite happily stayed in bed instead of riding over the woods.  With some gentle coaxing from Mr Toast, I managed to haul us to the Chase.  And I’m glad he did, because rather predictably I had a splendid time.

The Chase Trail chaps had been busy, with both section 2 and the new start of section 6 being open today.  Section 2 in particular is riding nicely, it’s great to have it open again,  The new bridge is a nice addition, taking the FtD traffic away from the shared track that’s normally fairly congested, and it avoids The Rock.  My exit off the bridge was a little lacking in grace, but I rode it without hesitation and I didn’t fall off.  Victory number one! I’m hoping next time will be easier, when there’s not a pair of blokes near the end of it having a picnic…

Section 7 went OKish, still a bit ropey on the boardwalk, but no comedy offs or injuries as of yet.  Got up the fireroad hill…wait for it...entirely in the middle ring!  Victory number two!  At the top I was Oatieless, but I had a break anyway.  I was passed by a chap and his kid – just as I noticed that dad was riding a Stumpjumper FSR Elite, the kid piped up, “Nice bike!”.  Kid was also riding a Stumpjumper FSR Elite.  ‘Twas a veritable Stumpjumper Elite convention!  I was going to crack a joke about how one of us was going to have to go home and change, but I didn’t because a) I don’t think blokes understand the cliché about not turning up somewhere wearing the same outfit, and b) they’d already ridden off, having superior stamina to myself.

Not wanting to let the Professor down as his brethren zipped off ahead, I jumped back on the bike and headed left through section 8.  As I was riding, I realised that I really, really love the Professor.  We make a good team.  I’m still a bit ropey on those jumps – I think I just need to take them faster and smoother, because at the moment the front-end is landing a bit heavily, particularly on the last one.

Got to the end of section 8 – I felt a bit more knackered on the climb at the end than I did last week – and was faced with the log slope of doom, which I’ve ridden down once.  Badly.

I admit, I was going to chicken out yet again.  I literally got off the bike, started to push it down…then pulled it back up.  It was one of those things I’d have to get over sooner or later, and it was very quiet – no-one behind, no-one in front.  Took the bike back a bit more to get a run up, rode to it…and down it.  It’s a bit like having an injection, it’s never as bad as you think it’s going to be, and you’re left with a sense of ‘Is that it?’  Victory number three! 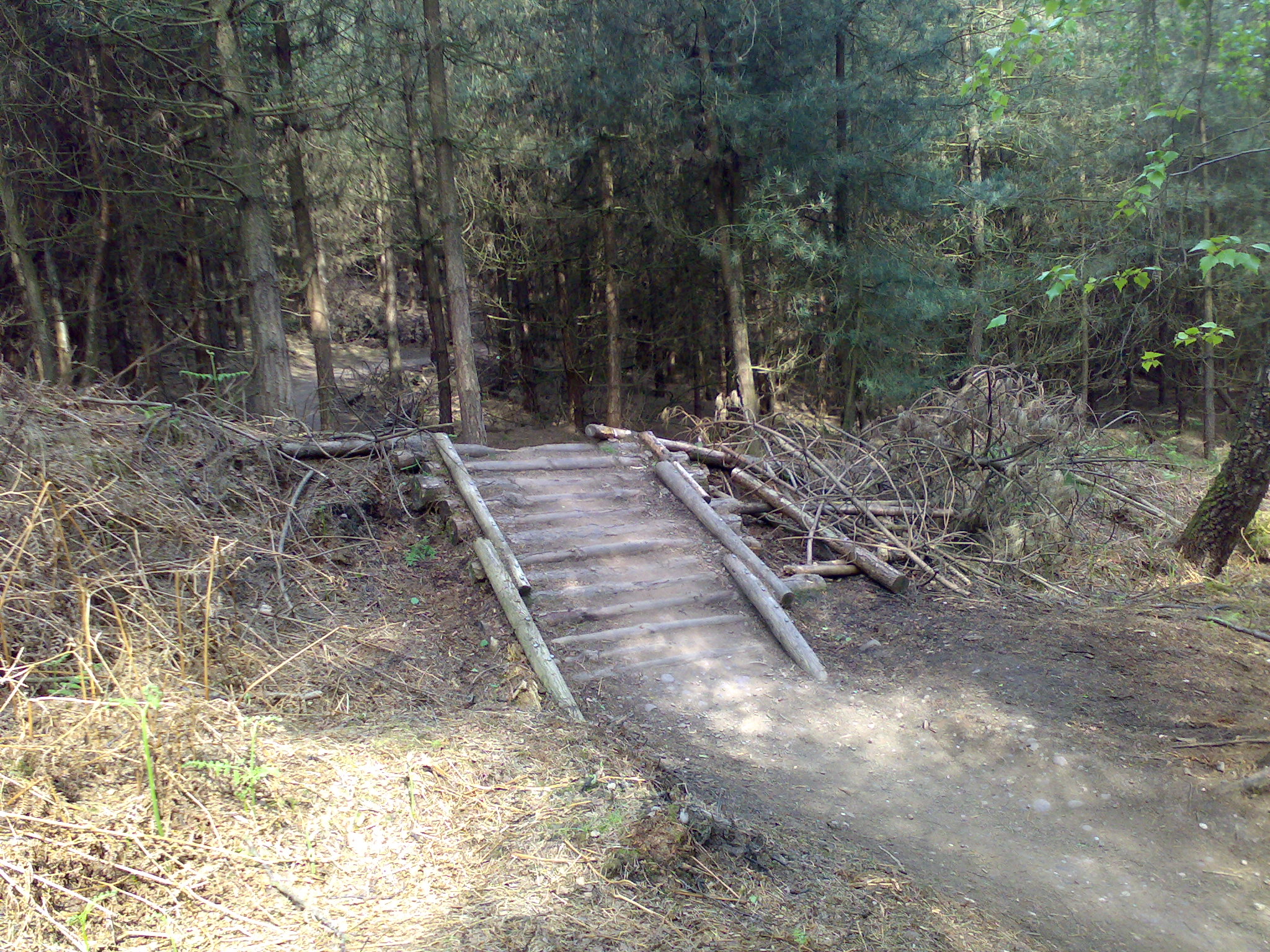 I rode 9-12 fairly speedily, not breaking between sections.  Section 13 was great fun, again (iPod tune of the ride: Guns n Roses, Live and Let Die), although I did nearly lose it on a corner.  I take this as a good thing, it means I’m going faster! 😀

14 was tiring but rewarding, plus it had a friendly dog pacing up and down the hill that leads to it.  I think he lived in the nearby house, he didn’t seem to have any owners with him.  He was nice though.

I had to pull over to let someone pass on 14, which lead to an interesting moment when my saddle decided to spin.  Tightened up the seat clamp, and off I went again.  Rode 15 well, made me smile.  Unlike 16.

Ahhh, section 16.  Will we ever be friends, you and I?  Somehow, I can’t see it happening.  I know I should blame myself and my lack of spatial awareness and steering ability, but instead I’ll blame the trees.  I just can’t get any speed up on it at all, plus I always seem to smack my handlebars on a tree at some point, and come off the bike. Even the offs on 16 don’t have the common decency to be dramatic, they’re just a bit slow motion and rubbish, more like comedy dismounts.  Although this time I did manage to knock out my back brake, which made the concluding part of the ride…interesting.

Bad bits: Section 16.  We hates it, my precious, we hates it!  Stupid people out for a stroll on section 6 and looking surprised every time a mountain biker went past.