On this fine Saturday, I finally got around to doing all of Follow the Dog.  Well, all of it that’s open, anyhoo – section 2 is still closed.  Admittedly, it took me a fair while – I was feeling fairly battered for no discernible reason.  The ride didn’t get off to the most auspicious of starts – the back end of the Professor slipped off the two little planks.  Whoops!

I felt a bit ropey after that – after all, it’s so rare I slip up there.  If I slipped up there, doing the boardwalk would be stupid, wouldn’t it?

Well, I went ahead and did it anyway.  I was practically crapping myself all of the way down it – I’d tried to lower my seat before hand, before realising my seat couldn’t actually go any longer due to a combination of the length of the seatpost and the shape of the frame.  But I figured that I get to get it out of my system sooner or later, so off I pootled.

There was the odd ‘Ooooooh’ moment, partly through the knowledge that I couldn’t actually get my feet down easily if I needed too (I have to lean the bike quite a lot at the moment to get a sturdy footing, not ideal on the boardwalk), and also partly due to the fact I’d wound myself up beforehand.  “Oh noes, northshore”, that sort of thing.  But like Gloria Gaynor, I survived, and have clawed back a little more confidence because of it.

Got up to the top of the fire road hill, and had the obligatory Oatie break.  Tried to take a photo of The Professor – alas, he’s just too gleaming for a mere Nokia phone camera. 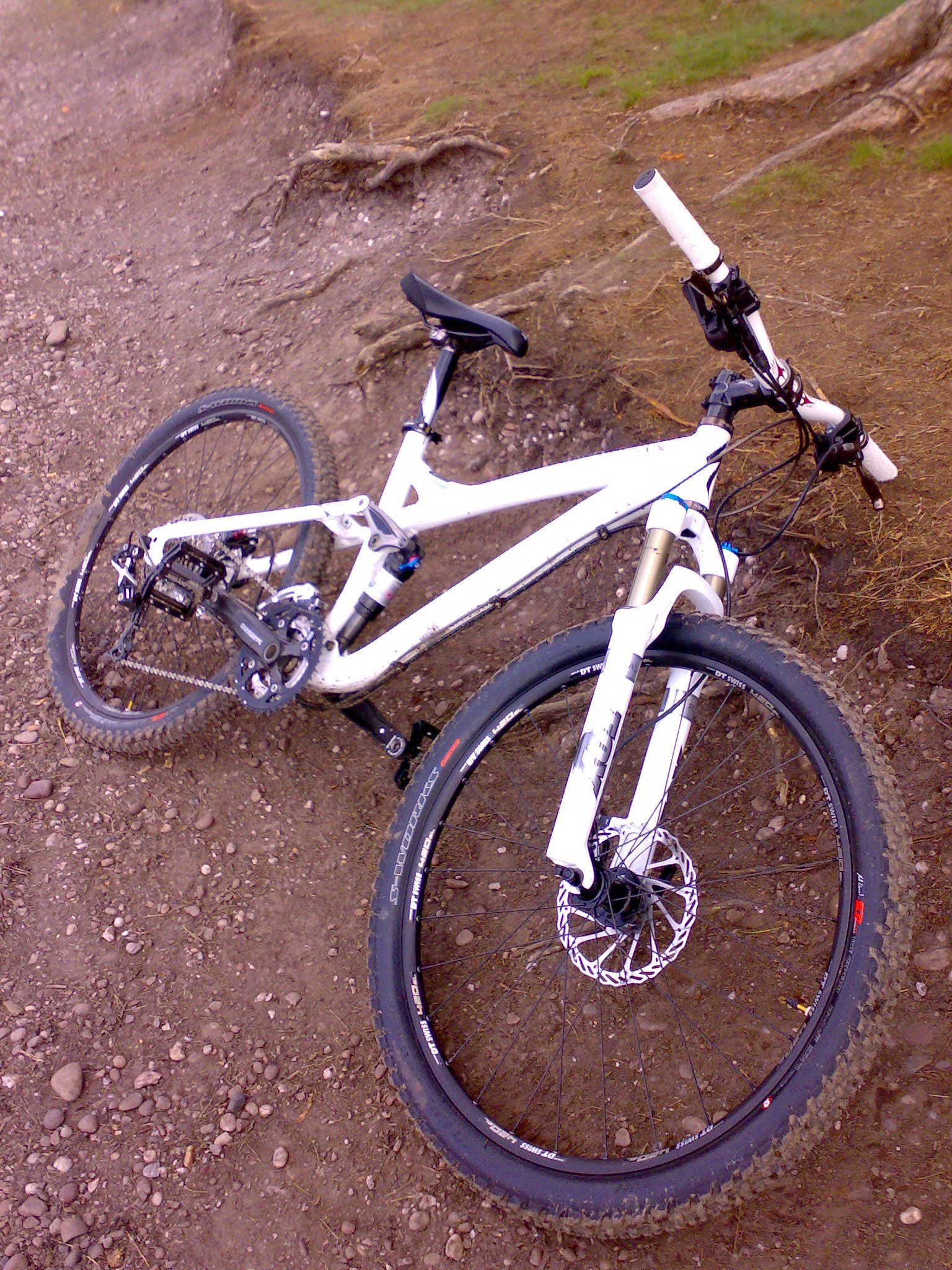 I did manage to get a fairly decent picture of the Professor’s headset.  See, we’re made for each other, he even has my initial stamped on him! *sniff* 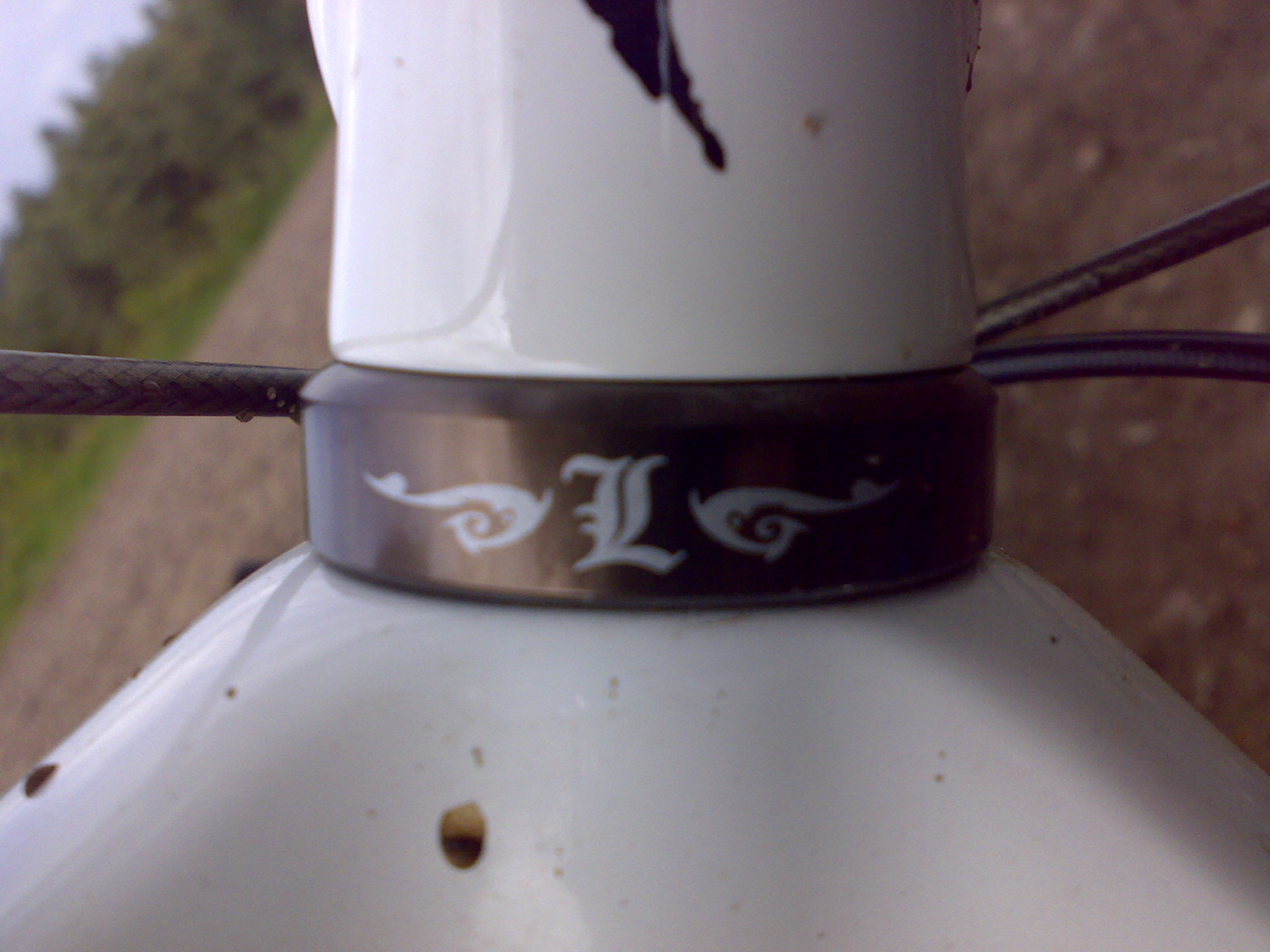 I went through section 8, again still feeling a little skitty. However, I must have been doing something right – although I rode it utterly lacking in grace and skill, I actually did it a lot faster than usual, and emerged from the end of the section with a vague feeling of surprise – I’m sure the climb at the end went on longer than that…

Went through 10 – 12 fairly speedily, but it wasn’t until section 13 that I felt completely comfortable. Any worries about the previous sections was blown away as I threw myself down section 13 faster than I’d ever done. I love full suspension! Section 14 was…interesting. I rode up to it for the first time this year (as opposed to pushing my bike up), and was shocked at how much traction the Professor had. I felt a bit queasy and there were people behind me, so I decided to have a break. I wondered if Mr Toast would pass me on his second lap.

I waited around for a while until I felt human again, and eventually Mr Toast did catch up with me. I pootled on ahead and took the lead.

It was the first time I’d done 14 on my Stumpy, and it wasn’t without problems. At one point the back end of the Professor skidded nearly out of control in some sand, but I managed to hold it…not without some squealing though! Might get some grippier tyres than the Captains on at some point.

15 was fine and dandy, section 16…made me cross. Even though it had tranquil deer nomming grass near the entrance, I’m becoming fairly certain that I had that section. It’s just so fenickity, and I lack the control at the moment to ride it when any amount of speed.

So all in all, it was a bit of an ambivalent ride. Awesome, because I finally rode the entire track without missing any sections, including the boardwalk, but a bit…well, sucky, on the grounds I didn’t ride too well. Although it was probably still faster than my best on the little Trekadee, I know that I rode better last week. I’m pondering taking a closer look at my diet, making sure I’m not just relying on a mid-ride Oatie for energy. Delicious, delicious Oatie…

Trail: All of FtD that was open. Haw haw!

Highlights: Finally hauling my fat arse around the entire trail. Doing the boardwalk.

Bad bits: Just feeling a bit off. Doing the boardwalk!