Today was my first ride on my Trek since my knee operation back in September.  I wondered how I would get on – for the past two weeks, I’ve been riding £1500 – £2400 full-sussers.  Would I be able to get suitably re-acquainted with my diminutive black and green hardtail friend?

The answer was a most definite ‘Yes’.  It’s funny, because the combination of the demo days and my consultant’s dire warnings have really taught me the importance of having my saddle at an appropriate height.  I now wonder how the hell I actually rode with my saddle as low as I did.

Although I still think that the Trek is a little on the small side for me, I had a blast, and it was a lot more comfortable and a lot less tiring with the higher saddle position.  I’ll confess, my plan was to stick to the greens, and not do any reds.  Didn’t want to overdo it, see, especially given that we’ve got the Leisure Lakes demo day tomorrow.  Wanted to strengthen my knees and get used to being back on the bike before hitting FtD.  And I’ll admit, I’ve lost quite a bit of confidence – part of my reluctance to get back onto FtD was down to my worry that I’ll have lost all of the skills I gained last year during my recovery.

I set off with some determination.  Greens only.  But there was one challenge which I wanted to see if I could still meet – the fireroad hill.  Which would give out first, my fitness or my legs?  The answer?  Neither!

I have to admit, I didn’t approach the hill in the best of moods.  There was a large group of bikers completely blocking the fireroad path.  Not only did it mean that to get past them I would have had to leave the fireroad and ride through the muddy, churned up grass, but they were also blocking the exit to the previous section of FtD, completely messing up other riders’ flow and forcing some of the faster ones who weren’t expecting to run into a gaggle of morons to brake sharply.  I swear, some people have zero common sense.

Fortunately they moved off just as I was about to make my way through the mud.  I started up the hill…and actually got halfway up in the middle ring before dropping to granny.  I think I was fuelled by a mixture of disgruntlement and smugness – disgruntled that there was a big group of people showing zero trail etiquette, and smugness as I passed them as they gave up and starting pushing their bikes.  I think sheer bloody mindedness kept me in the saddle. At the top, I stopped for a well deserved Nutrigrain Oatie cookie.  Incidentally, I’ve developed a disturbing addiction to these baked wonders, which can’t be good news for my waistline.

So, at the top of the hill.  I could go straight on down the green…or left to the newer section 8, or right down the old one.

Well, the old section 8 isn’t really red route any more, is it?  I mean, it’s all downhill, and so friendly looking.  Look!  The berms look like smiles!

So, off I went.  Didn’t do too badly at all, although I think I might have uttered “Oh shit” at one point.  I came out at the bottom in one piece, and decided to head right and explore.

I went down a lot of green routes – it was really nice to explore new areas, plus it gave me time to recover from the fire road hill and the bermy bit.  I always come out of red sections utterly knackered, even the downhill ones.  I think it’s possibly because I forget to breathe…

Anyhoo, new routes mean exicting new warning signs.  I particularly enjoyed the one below, it adds a sense of danger and adventure to the tamest of paths 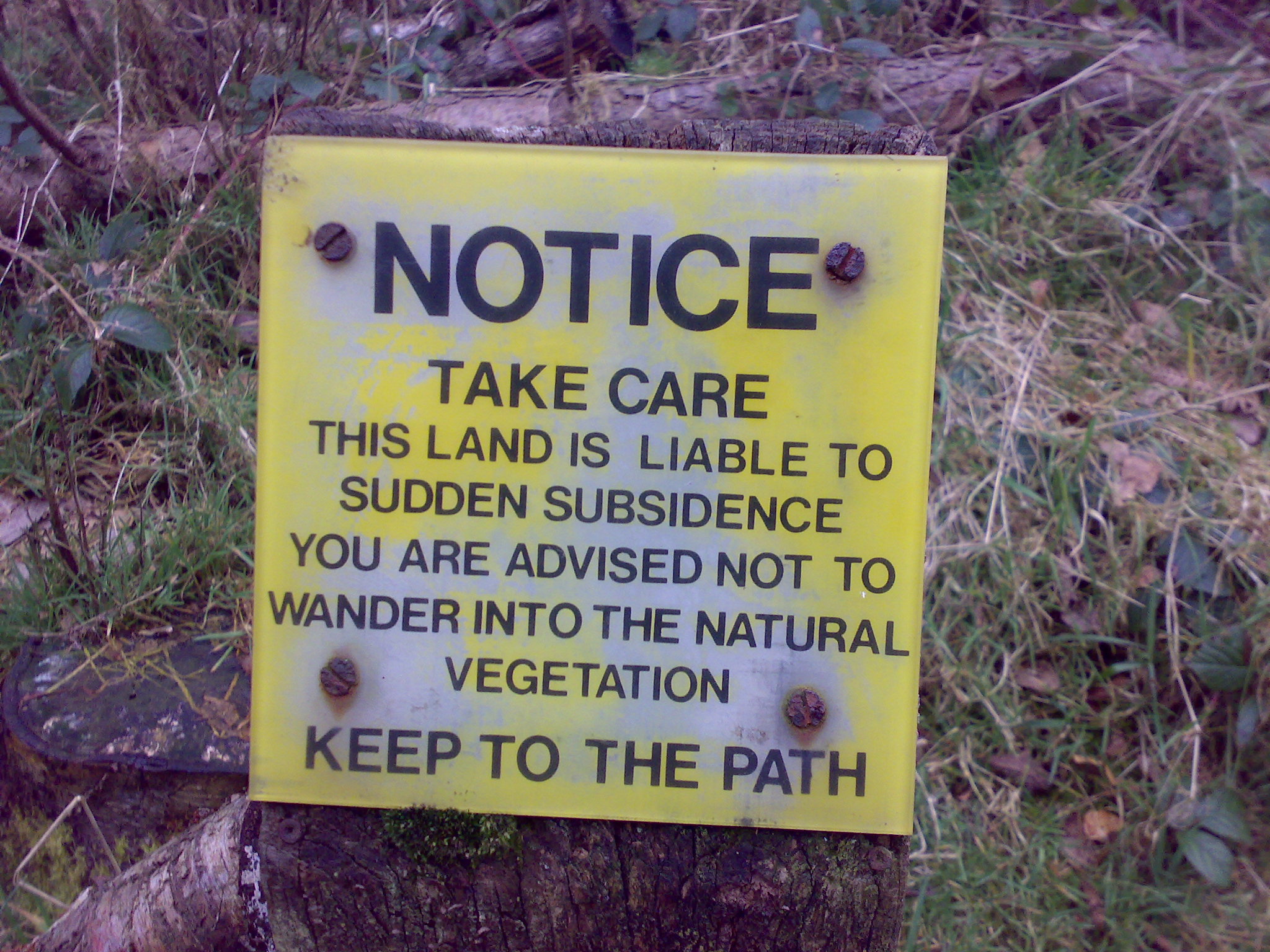 After riding around for a good while, I eventually ended up finding myself back at the entrance to the wooded sections that follow section 8.  Then bizarrely, I found myself  riding along those wooded sections.  Not sure how that happened…

Again, I was a little shaky.  I’d forgotten how much punishment my bike could take – I’d see a particularly angry looking root or rock, and think, “Oh shit, this is going to knock me”, but my bike pretty much sailed over it, and the jarring bump I was expecting to happen never occurred.  It probably would have been even less jarring if I had been more relaxed, and not bracing myself for major impact.  “Mountains and molehills” spring to mind…

I did a few more greens, then found myself at the start of section 13.  I think you can probably imagine what happened next, dear reader.

I hung around the start of section 13 for a good while.  There were a couple of blokes there, and I was worried that if I started off before them, they’d end up catching me up and putting me under loads of pressure – or worse, crashing into me.  Once they started taking off their helmets and getting out their lunch, I figured I was fairly safe…then a bunch of other guys bowled up.  Again, I waited…and then they took their helmets off and got their lunch out.  It would seem that the start of section 13 is THE place for manly sandwich eating and male bonding.

I started off, desperately hoping that I wouldn’t make a tit of myself when there was an audience.  Fortunately, I took the section very well – not particuarly fast, but more consistent in speed and with a smoother line than I have in the past.   I had a huge grin on my face as I came out the section.

I did more exploring of the paths around the pools before returning to the cafe and meeting up with Mr Toast.  A good day all round!

Trail: Exploring the greens, a good few sections of FtD

Highlights: Section 13, managing to prove to myself that I haven’t become utterly inept over winter.

Bad bits: The group of selfish numpties blocking entire paths and the exits/entrances to FtD

Post ride food snaffled: Food had stopped at the cafe, so it was a cup of tea and some peanuts.