1. Take the biker and leave to soak in a marinade of knee-op recovery for six months.

2.  Add the bike to biker.  In reality, it doesn’t really matter which bike is used, but in this example we used a Santa Cruz Juliana.  Make sure it’s of a completely different build to any previous Julianas that the biker may have ridden, and add a long stem.

3.  Add the unfamiliar trail.  After about five minutes, the biker should meet a steep descent covered in roots that look far scarier than they actually are.  To the left there should be thin annoying at face height.  These should suitably panic your biker, and ensure that they are forcibly dismounted as they panic starting the descent.

4. Once the biker has rather gingerly returned to base, add the next unfamiliar bike.  In this recipe, we’ll be using an Orange Diva (Long).  If the biker expresses concern about riding in a pack because of being unfit and out of practice, reassure her that the guided demo ride won’t be too tricky.

5. Return the biker to the unfamiliar trail.  Ensure that there are several long gruelling uphills, that are far longer than the fire road hill.  This should ensure that the biker’s knees swell up uncomfortably.

6.  Follow the uphill with a completely unrewarding descent.  Make sure that the descent is actually far more difficult and technical than anything the biker has done before, be it Follow the Dog, Llandegla or Glentress Blue.

7.  The biker should be completely worn out by this point, both physically and psychologically.  At this point, they should have lost confidence to the point where they literally cannot ride the bike, even over stuff that they know is doable.

8. Rub salt into the wound by following the terrifying downhill with more dull uphill climbs.

Yes, as you can probably gather from the above, today’s demo day didn’t go too well.  It didn’t get off to a roaring start when we got a phone call from Leisure Lakes just as we were about to set off.  Unfortunately the Meta, which I’d been looking forward to testing the most, hadn’t been delivered to the demo site.  It was understandable – the chap who was responsible for sorting it out had suffered a family bereavement, so it’s completely understandable – it was just a shame.

I went on a Julianna again, which still felt too short, despite the long stem.  We were too late to join the guided ride, but were allowed to take the bike for a pootle nearby.

Unfortunately I discovered that going down a steep rooty hill, whilst being whipped in the face by branches, on a bike you already feel uncomfortable on was a bad, bad idea.  I bailed in spectacular fashion with a scream, landing shoulder first.  Fortunately there was nothing hurt but my pride, but I was left a bit shaken.

The day really went south when I demoed my second bike.  The bike itself – the Orange Diva – was great.  It was the guided ride that did me.  It went down the rooty annoyance that had dislodged me on the Juliana, but that was nothing compared to what was to come.

There were long, long climbs.  There was a terrifying downhill section with seriously churned up mud, extremely tight corners,  and tightly packed trees.  I found it impossible to get any sort of flow – I would have found the section intimidating on my own hardtail, never mind a full-susser that I was riding for the first time.  I was literally edging down the trail with my feet on the floor – that was when I wasn’t walking down.  I was just too shaken and scared to even attempt what they were expecting me to do.

I had the small consolation that I wasn’t the only person who was struggling – a few people commented on how the route we’d been taken was harder than any red they’d done, and some were only just getting into mountain biking. One even came off, and ended up having to go back because they were too hurt to carry on.

It made me wonder why on earth Leisure Lakes had insisted on the guided ride format for their demo day, particularly as they’d no effort to find out the experience or ability levels of the people attending.  In a way, I can completely see why after attending other demo days – do guided rides, and you can make sure that the bikes go out and come in exactly when they should.  No late returns, no double-booking, etc.  And I imagine they couldn’t hold the demo day near the tamer Follow the Dog due to the fact that Leisure Lakes and Swinnertons are competitors.  I can also understand that if you’re demoing a full-suspension, you’d want to be able to test it on something other than a fire road.

But on the other hand,  I can’t imagine anything more off-putting for newcomers to the sport than being forced to ride an unfamiliar bike on a very difficult trail.  OK, ‘forced’ is a bit OTT, but it is difficult to say, “I can’t do this”, especially when you do genuinely want to try the bike out. I was just getting incredibly frustrated and in a lot of pain, which would have never happened if I’d been allowed to test the bike at my own pace, and within my own ability level.  I had to keep reminding myself (and anyone else who was within earshot) that this was only the fourth time I’d been on a bike since my operation, that I’d ridden the Chase and Llandegla reds fairly comfortably, and that the trail was unfamilar and far harder than anything I’d done before.  Even now it feels like I’m making excuses, and that I should probably pack in mountain biking as I’m obviously not cut out for it…and I hate that feeling.

In any case, I can’t imagine the guided ride was that great for the very experienced riders either, who had to frequently wait for the less experienced. I can’t really blame Leisure Lakes though, I suppose it’s not entirely unfair to think that people demoing top-of-the-line bikes should be able to ride whatever’s in front of them, and they always made sure that there were enough guides keeping an eye on everyone, including freaked out stragglers.

On the plus side, the Orange Diva was great.  Wasn’t too keen on the brakes as although they were powerful, the levers felt a little loose (again, more of a setup issue/matter of personal preference than an actual problem), but I loved being on a longer bike.  Loved it. 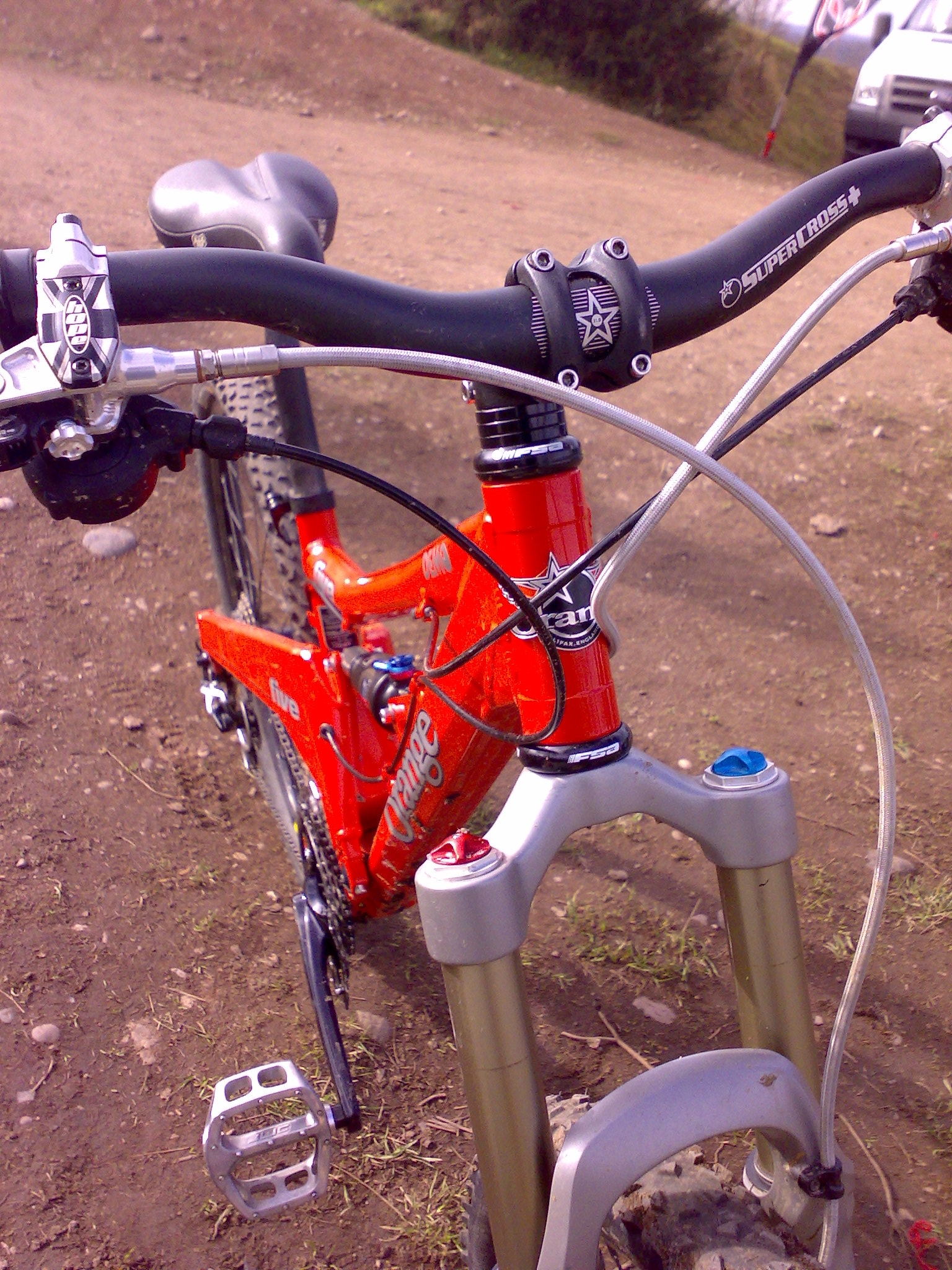 Out of interest, I asked what the difference was between the short Diva, the long Diva, and the man’s Five.  The answer?  The long Diva has the same frame as the standard Fives.  Mr Toast was quite pleased about that – he now has high hopes for the Meta.  Although the downside is that if I don’t like the Meta, the two bikes I like are well over two thousand pounds.

The chaps from Leisure Lakes said that I could demo a Meta for an entire weekend, so I’m hoping to get that sorted soon.  Until then, I’m going to drown my sorrows with ibuprofen and get out the knee peas again.  Oh, and here’s a picture of Mr Toast’s Meta: