So despite threatening to go to Coed-y-Brenin for three years, on Saturday we found ourselves with the good crew of Chase Trails over Nant-yr-Arian.  This was highly unusual, as it involved me getting out of bed before 11am on a Saturday.  Had to get up at 6am, to be exact, which is practically the middle of the night.

We sallied forth in the bleak autumny weather… oh no, wait, it was blue skies and 26 degrees.  I don’t know what’s going on with the weather, but I’m not complaining.  It was fantastic.

Approaching Nant-y-Arian a few things became clear.  One, the locals in the surrounding villages really don’t like pylons or wind turbines.  Two, despite the presence of nearby turbines, red kites clearly don’t give a crap.  Three, Red Kites are ruddy huge.  Four… the hills are also quite large. 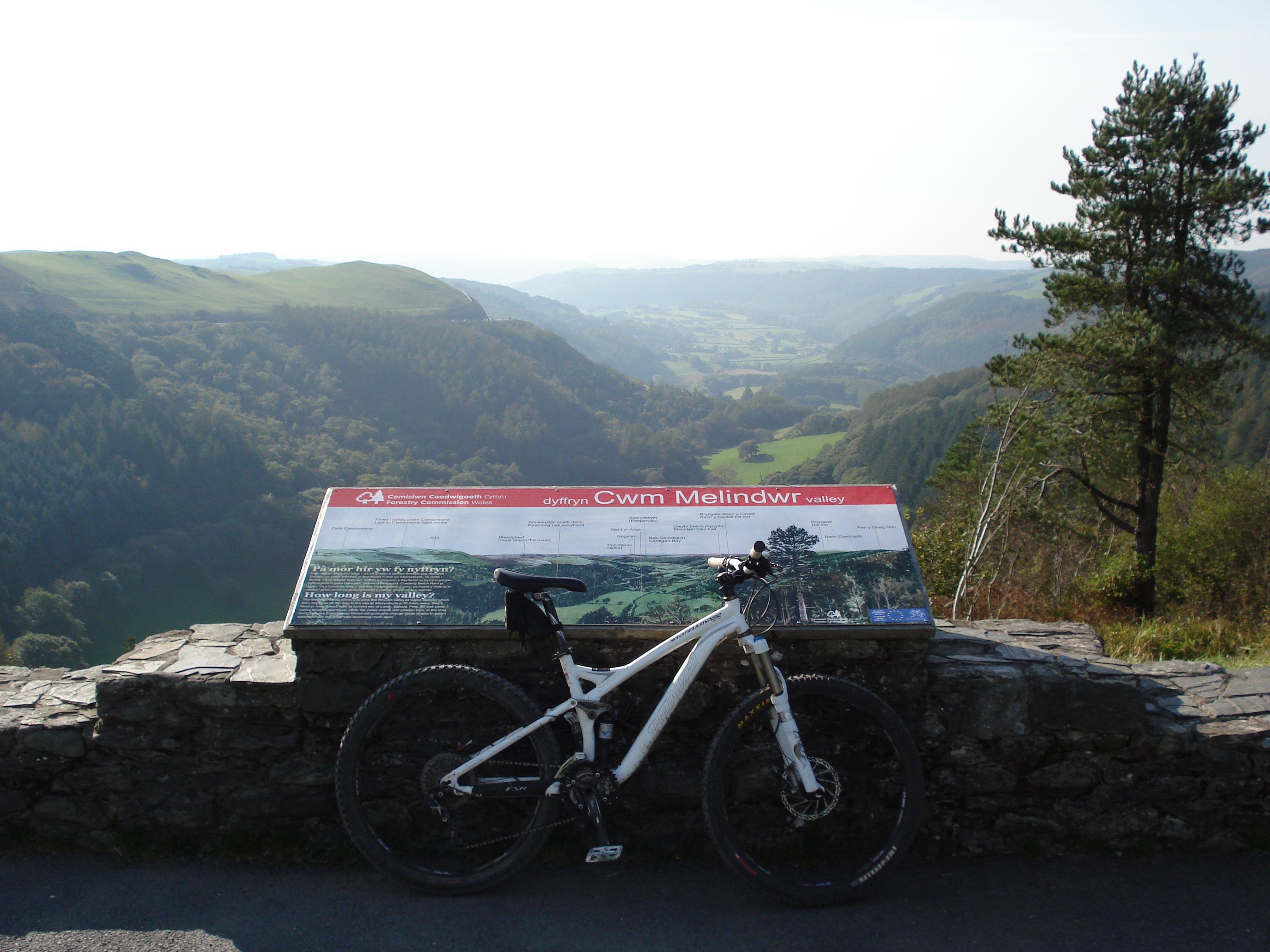 After purchasing the obligatory souvenir for the Map of Joy (see the following post…), it was off up the Summit Trail.  There was the expected long fireroad climb at the start, then we were off down the Italian Job.  I gloriously minced down the trail.  I believe I’ve mentioned before that I’m not a morning person, so suddenly being faced with being on a large hill after getting up at six and driving for three hours and it not even being past noon was more than my tiny brain could cope with.  The trail is sturdy and not overly technical, but OMG IT’S ON A HILL!  What if I fall off the side and fall to my death?  Mr Toast can’t drive, how will he get home?  So off I hopped at the slightest obstacle, whimpering internally.  And externally.  Step up?  Do not want.  No, I don’t care if it’s only three inches high, there’s a root after it – what if I hit the root AND DIE?  Rocky steps?  No, I don’t care if they’re comparable to the steps on Tackaroo, I can do those but these ones are MADE OF ROCK!  What if I faceplant?  It’s only the first section!  I’ll spoil it for everybody!

Obviously everyone else was fine, with most of the boys throwing themselves over an optional feature for filming pleasure.  Sadly our little point and click camera struggles with the sheer majesty of Gnar, so most of the action shots came out blurry. 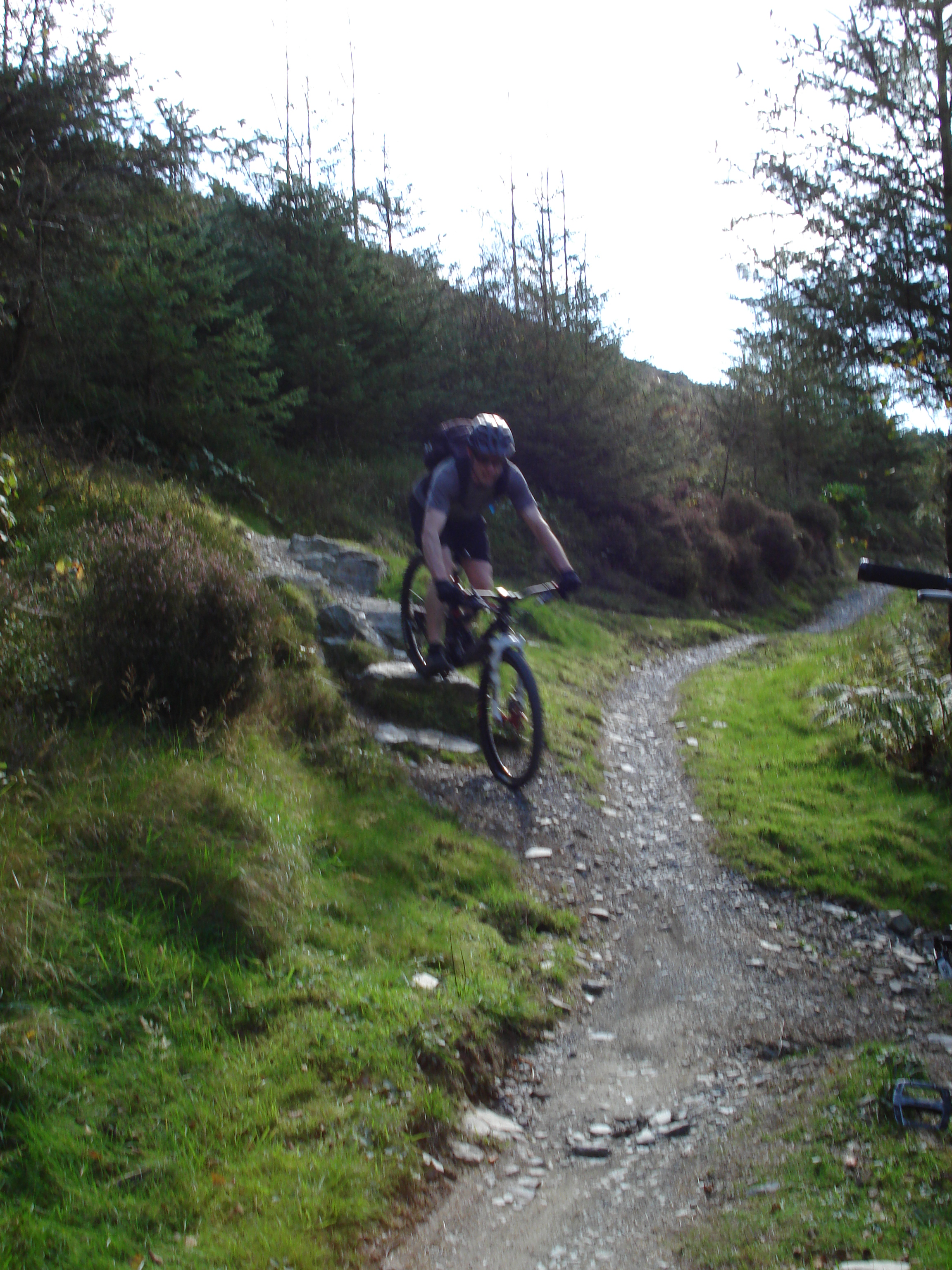 Nant-yr-Arian is very pretty.  Lots of nice views, and quite a variety too – woodland, moorland, hills, lakes.  Why, just look at this attractive group of folk enjoying the scenery. 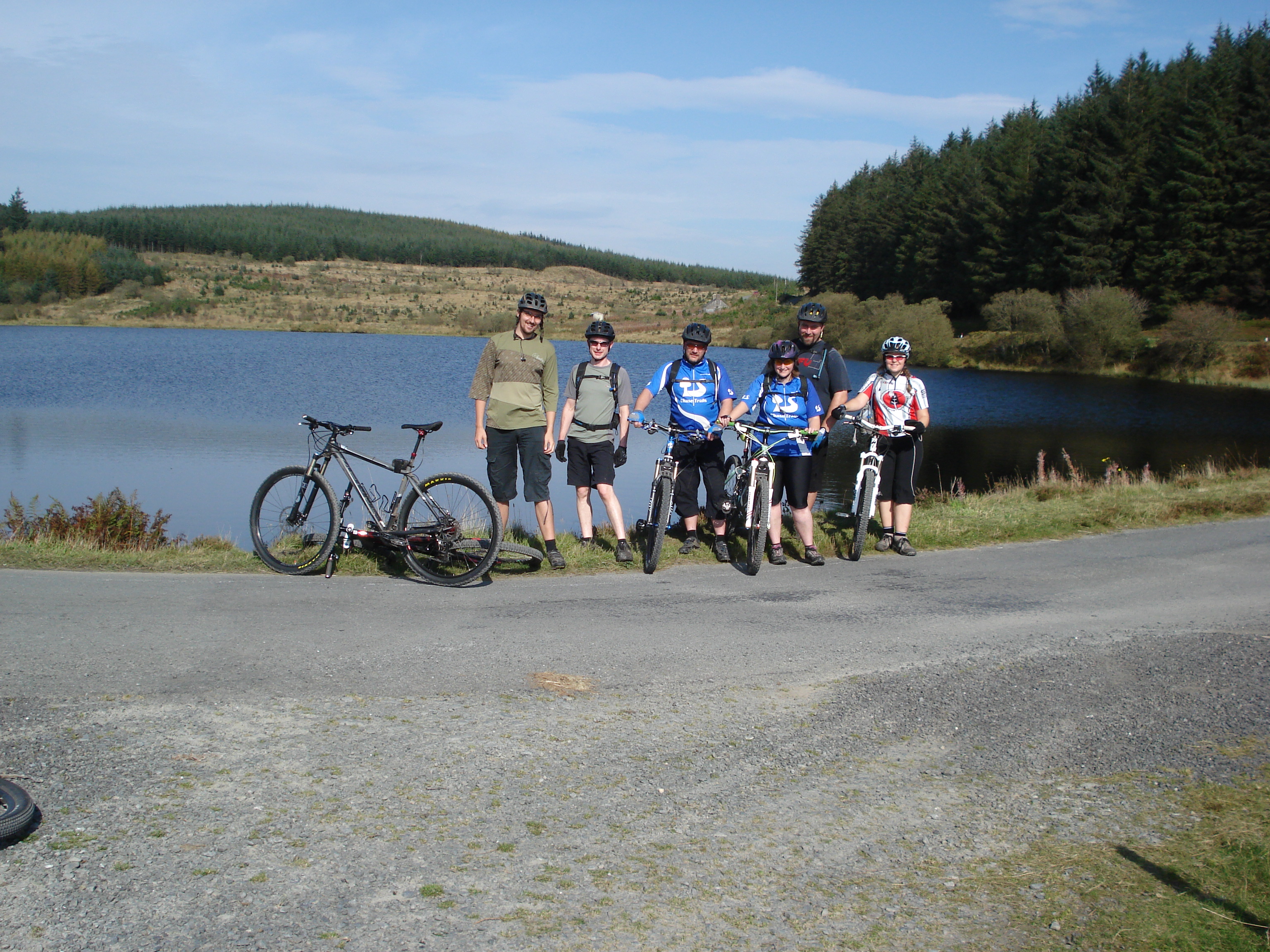 I generally forget that Mr Toast is quite tall.  Photos like this remind me.

There’s quite a lot of fireroad from one section of singletrack to another, the one leading to Mark of Zorro being quite loose and Peak Districty.  I’m never comfortable with these kinds of trails as I don’t feel even remotely happy going down them with any speed, but the slower you go the more shaky it feels.  Plus there are distractions.  Not to sound too Welsh, but there are really pretty sheep around here – perfectly white and fluffy, very posh looking.  However, they do also look a bit Black Metal.  Let’s look at the evidence.

Deathly pallor?  Black eyes and mouth? Yes, there’s no doubt about it.  Nanty sheep are proper grim and frostbitten, and liable to start singing about Satan any minute now.

Moving swiftly on (or not so swiftly, it was a bit hilly) we hit the Mark of Zorro.  This section was a huge amount of fun – I perhaps enjoyed it so much as I was finally getting into the swing of things, plus going through the woods meant that everything was under a nice carpet of friendly pine needles.  Emerged with a huge grin on my face… until we hit The Leg Burner.  The Leg Burner isn’t steep, and it’s in a straight line…but, by Zeus, does it outstay its welcome. There’s a brief but ultimately pointless respite in the form of Emmanuelle, which most of the locals dismissed as being not worth the diversion.    On the plus side, when you get to the top there’s a viewpoint with a nice mosiac that says how humans ‘burrowed for silver and lead’.   I did take some pictures, but they don’t really do it justice.

Eventually you end up at Drunken Druid, which has its moments of joy but also a horrible incline that I nearly made it up but ultimately failed. The end of it has a few rock gardens that I rode quite happily… well, I didn’t die… which left me pondering if I could manage the three on the Monkey.  I’ve done the second one once, really need to get around to riding the Monkey again…

High as a Kite winds through the trees back to the Forestry centre, and I rode it relatively speedily, albeit with a few squeals.  Roots, you see.

After a ham sandwich and a cup of tea, it was time for round two, this time tackling the Pendam trail.  Pendam takes in some of the Summit sections, adds a few of its own but misses out on The Leg Burner and is generally a bit shorter and less demanding.  By this time I was fairly comfortable with the notion of hilly death, and rode all of The Italian Job (with the exception of the crap step up).  I realised that my comrades were filming my efforts, so I took comfort in the fact that even if I messed it up and faceplanted, at least Chase Trails could get £250 from You’ve Been Framed.  Fortunately (or not for Chase Trails) I didn’t mess up – my weight was a bit far forward so I didn’t exactly ride it gracefully, but I never felt unbalanced or like I was going to come off.  Which was nice.

The main diversion of Pendam was by the lake, where it goes its own way from The Summit Trail to Hippity Hop, The Spine and The Camel’s Hump.  Passing the lake was thoroghly entertaining, as by this time a group of enterprising young lads had strapped various buoyant items to cheap bikes and were proceeding to launch themselves into the lake off a ramp.  As one of our group remarked, Jackass has a lot to answer for.  Hippity Hop was good fun, lots of jumps (as you’d expect from the name), as was The Spine.  Wasn’t quite as keen on the Camel’s Hump as it was a bit looser, and I’m a massive lamer. There was the tail end of the climb back up to Drunken Druid, and the end was the same as the Summit Trail.

Knees played up slightly on the climbs, but my biggest issue was the descents.   After a short while, I had the same burning sensation in my left leg that I had at Glentress.  I don’t know whether it’s a matter of bad positioning (the pain varies between being right above my knee to being further up my thigh depending on where I have my weight), or whether they just need building up.

I really enjoyed Nanty, and felt it was well worth the drive.  Not too technical, but enough to keep it interesting, particularly if you’re going fast.  There’s a lot of fireroad and bridleway, but I think that with the Chase we’re massively spoilt in that respect – there’s really not a lot of non-singletrack stuff on FtD.  Normally if there’s a lot of climbing or fireroad sections I get a bit stroppy and feel like it wasn’t really worth it (hello Mabie), but Nanty’s singletrack sections were thoroughly good fun.  Everyone was very friendly too, even the guy who’d managed to snap a crank (not a euphemism) was still smiling.

Got back home at nine in the evening, had a bath and a bowl of Shreddies, then promptly passed out for 12 hours.  Awoke on Sunday with my knees, thighs, arms and back killing me.  Would I do it again?  Definitely!

Highlights:  Not dying after The Leg Burner, doing the Italian Job properly 2nd time around