So this fine Saturday was the day I finally decided to bite the bullet and hit Follow the Dog in its entirety.  If you’ve been reading previous entires you’ll know that my red route riding since the end of November has been limited to the start and end sections of FtD whilst I get back into the swing of things.  And oh my, how I did swing!  Took it fairly steady, and it was very, very busy – there were a few breaks between sections which were longer than I needed as I was waiting on groups of people to pass, or giving families a headstart, but even still I clocked in at a not entirely terrible 1 hour 15.

I’d been putting off the Steg for a while because I am still a glorious mincer in matters of the rocky steps on corners going onto a bridge variety.  But I did it no problems – oddly it’s no longer the turn on the rocks that bothers me, but the fear I’ll go Benny Hilling off the right hand side of the bridge after clearing the rocks.  Hasn’t happened yet, so fingers crossed!  I marvelled at the end of section 6, which was previously almost completely flat, but now resembles a pump track for tiny, tiny people.  Remember kids, go through the puddles, not around them!

Had no problems with section 7 other than Evil Root Number One, although I automatically hopped off before I even looked at it.  Having looked at it, I could swear that it’s not actually as bad as I remembered it being, as if the front had been filled in a little.  The climb up to 8 felt a little more tiring than the week before on the Fuel, but I think that’s more down to having done more sections beforehand.  8 was good fun, although by the climb out of it I felt like I’d been kicked by a particularly ill-tempered donkey.

9 and 10 were nice and fast, although I nearly came a cropper on the bowl berm.  I noticed overall that I was still feeling a little unbalanced on corners compared to the Fuel, which was slightly disconcerting.  I still went at a decent clip though.  Went into 12 fully intending to conquer the Evil Slab (nee Evil Root Number Two), but it looked far bigger than it had in the photos.  With Evil Root Number Two, I could plough into it with no ability or finesse whatsoever – the replacement actually requires a modicum of skill.  Curses!

The Tackaroo section was good fun as always, although I still can’t ride the bloody switchbacks into Werewolf Drop, never mind Werewolf Drop.  Werewolf Drop is a proper collection of my nemesiseseses…nemesi…nemesises… er, riding issues.

A 90 DEGREE TURN INTO THE FEATURE!  I still struggle on tight berms and switchbacks (see The Monkey for details), so having a sharp zig zag leading into a right hand turn doesn’t come naturally to me.

NARROW TREES!  OK, I can cope with narrow trees – I’m quite small and don’t have the Harley Davidson handlebars that are all the rage.  I can go through the trees through the bridge onto the rocks on that one section of The Monkey. But that’s approaching from pretty much straight on!  That’s different!

A DROP…SLOPE… THING!  The drop itself doesn’t actually bother me that much.  OK, it took me two years to ride the exit to 8, but I don’t think Werewolf is actually that much steeper, and looks perfectly doable if you just keep your weight back and speed down a little.  But then….

A 90 DEGREE TURN AT THE BOTTOM!  Turning!  Bloody steering!  The humanity of it all!

For a lot of people, this agonising will be completely baffling.  They don’t even register Werewolf Drop as a hazard, dismiss it as a slope, etc.  And looking at it rationally, I know I can ride it.  I’ve seen people on Halfords specials wobbling down it with their brakes fully on and clearing it.  But this is my problem – what if?   Here, allow me to illustrate my thought process as I ride towards Werewolf Drop: 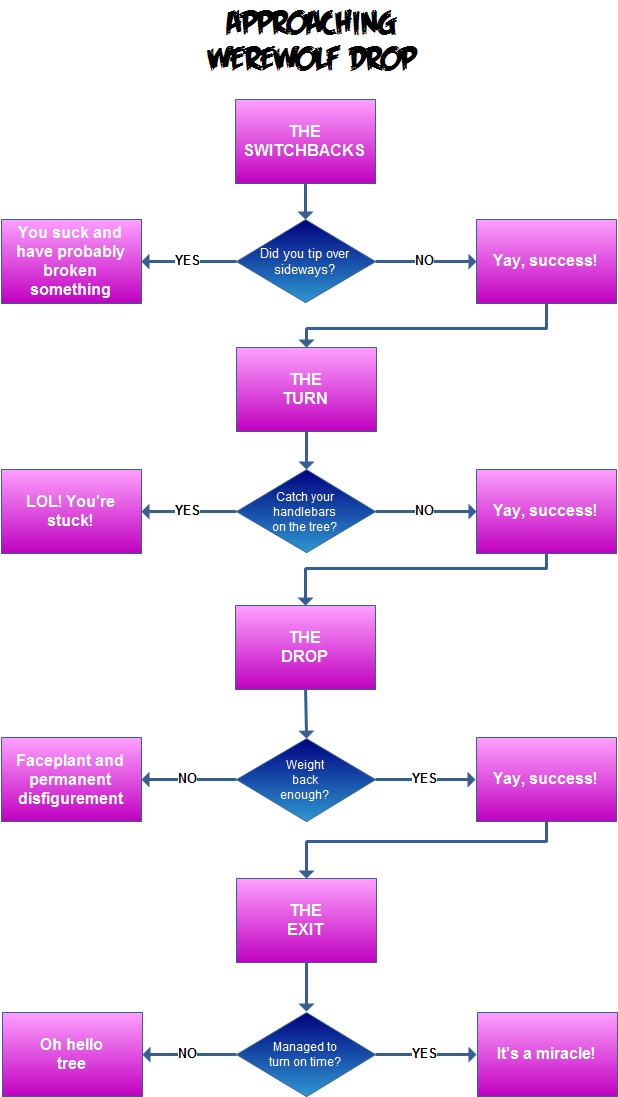 A lot of the time I’ll assume that at some point I’ll royally balls up and either damage the Professor, myself, or even worse, make a complete tit of myself in front of an audience.  So… I get off the bike and walk down. 🙁

Sunday was Mothers Day, and also the day of Mr Toast’s 1-2-1 skills course with Chase Skills that I sorted for him for Valentine’s Day.  In the morning I went trailbuilding before having a meal with my mother – we worked on section 11, resurfacing the most damaged areas of the trail.  I put my feeble upper body strength to as good use as I could and helped prepare the trail for the new material – for more information on trailbuilding, remember to take a peek at Chase Trails’ blog!

After trailbuilding and the Mothers Day meal, I went back to pick up Mr Toast.  It’s quite alarming going through the carpark at the end of the day – blokes seem to completely drop their inhibitions, and next thing you know, you’re surrounded by naked buttocks and swinging genitalia. Gentlemen, is there any reason why you need to get changed in public, out of doors?  Sweet Merciful Zeus, I had to get changed after trailbuilding, but I didn’t bloody do it in the carpark.  I didn’t know where to look!  WON’T SOMEBODY THINK OF THE CHILDREN?

Highlights:  Doing Follow the Dog and not being utterly terrible.  The beautiful sunshine. Trailbuilding.

Bad bits:  Still cowardly and avoiding stuff instead of riding it