Saturday marked our first trip over the Chase since the opening of Phase II – understandable, given the car woes and holiday, but slightly depressing that it’s been so long.

Turned up late due to the Vectra being a thirsty, thirsty car.  I’d looked at the fuel gauge before setting out, thought “Ah, we’ll have to get some fuel on the way back”.  As we journeyed forth, the needle moved towards the red zone with alarming speed.  Then through the red zone.  An emergency turn off to Sutton Coldfield got us to a petrol station before the Fantastic Mr Vaux passed out from dehydration, and we eventually bowled up at Cannock Chase over half an hour late.  Er, sorry about that… 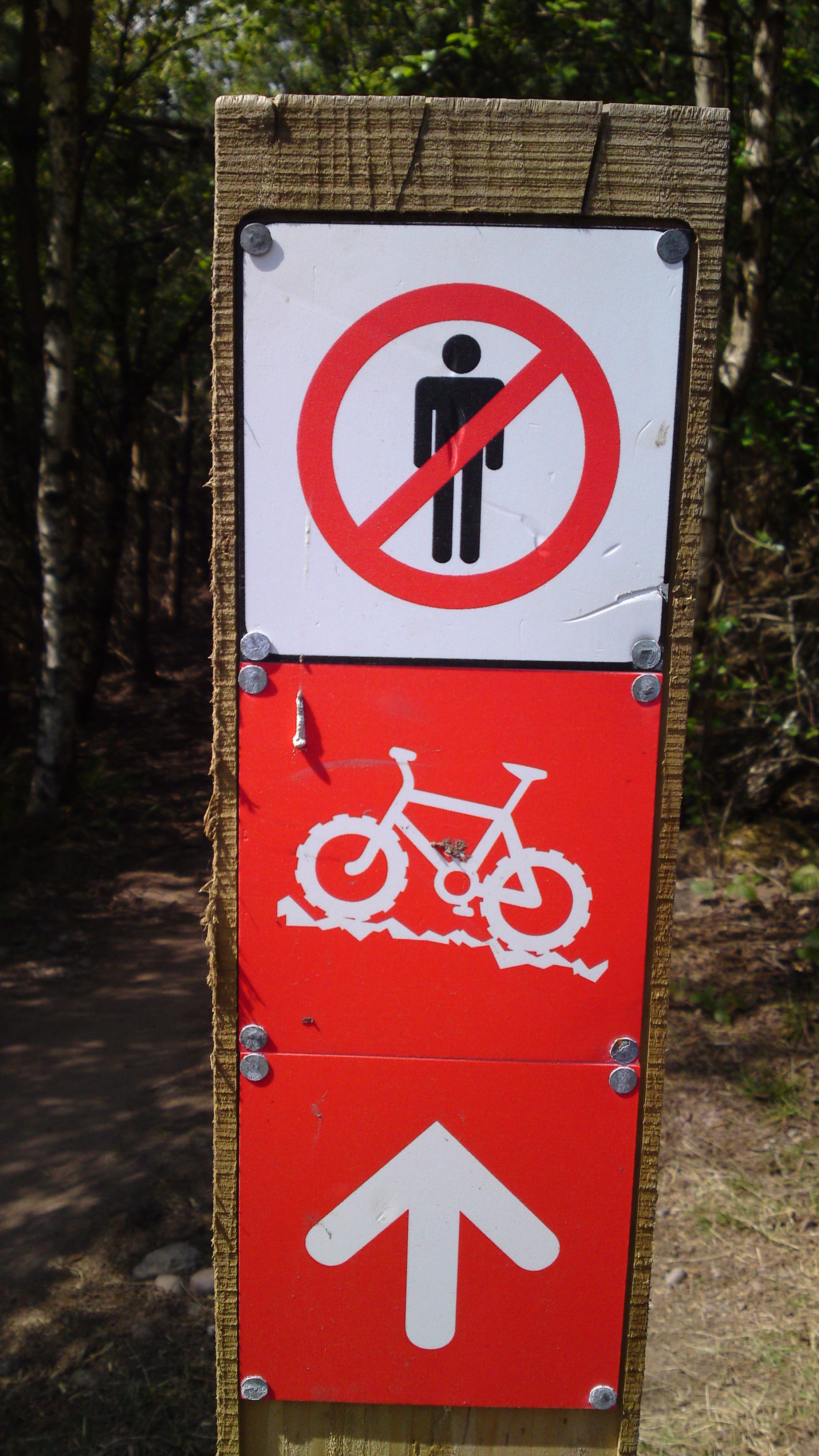 We set off down the Dog.  The Professor’s brake pads have recently been replaced, but hadn’t been ridden on.   Interesting timing – I would have liked to have bedded in the pads a bit more (or at all) before hitting the Monkey, but we can’t have everything!  The Dog felt nice and fast now its dry, although I still managed to fluff the exit of 2 again.  Avoided Evil Root Number One, even though Jessica and Charlotte were having repeated goes at defeating it.  Shambled halfway around 8 quite slowly, and then to the Monkey!

To say that the new trail is a step up in difficulty would be a mild understatement.  The link section made me a sad, sad panda.  A sad, sad panda not blessed with the ability or confidence to ride narrow, steep downhill bits with steps.  Or tight corners.  Or tight corners with steps on.  I pretty much minced the entire way down, pushing the Professor and making quiet whimpering noises.

There was a small congregation by the railway crossing as Rob in his Ranger guise offered handy advice on how not to be run over by a train.  You’d hope that most people would be able to manage this using their own innate common sense, but I guess when you’re talking about a sport involving people throwing themselves over rocks and hills on two wheels, common sense can be in dangerously short supply.

We managed to cross the railway… and then the road… without leaving a bloodied smear and mince behind.  Then it was onto the joy of the climbs.  I didn’t actually do too horribly for a first effort, actually managed a couple of switchbacks in a row.  Unfortunately it was thirsty work, and I quickly ran out of water in my Camelbak – a rarity for me.  The next few sections were a blur.  A thirsty, thirsty blur, and I soon felt like this:

Being in a group had its distinct advantages.  In addition to being able to steal some of Sally’s water, there was also a lot of encouragement – I rode the rocks down to Klondike Bridge, all of the bridges and their associated rockery.  Even the one that slightly alarmingly had Dave dancing on it (‘checking for play’, allegedly).   Chances are I probably would have wussed out on my own.  I can definitely identify my major weakness though – tight corners.  I can barely do them at the best of times, but when they have additional obstacles my brain freezes – hence why I can do the rocks down to Klondike, but still struggle on the exit of two.  Bugger.  The actual Monkey section is a bit beyond me – far too narrow… with rocks on turns.  One day though, one day!

I managed to come off on M8 – not sure what happened, I went around the corner then lost traction on the sand, and somehow ended up coming of the back of the bike and getting entangled in it.  Incidentally, if you see someone who’s come off, it’s generally considered polite to ask if they’re OK… not to edge around them complaining.   It shook me a bit, and I ended up going down quite slowly after that.

Eventually, after the climb back up Kitbag Hill, it was back onto the Dog.  We had a swift visit to Marquis Drive to get some sweet, sweet water (and cake, *cough*) and then resumed riding.   We were congregated around Evil Root Number Two, with Jessica and Charlotte again sessioning it.  Emboldened by Dime cake, I decided to give it a go myself – my second attempt in three years.

My plan was a simple one – I have 120mm of suspension, so I was going to barrel up to Evil Root Number Two as fast as possible, keep pedalling, and hope for the best.   OK, so that’s not much of a plan… but it worked!   After defeating Evil Root Number Two, I had a little celebratory dance – apologies to anybody who was left with permanent mental scarring as a result.

I really enjoy the new ending to FtD, so much opportunity to get some speed up!  Werewolf Drop still fills me with abject horror though (even more than the link section!), and seems to be getting more terrifying each week.  There was a bit of a queue at the top, with many people electing not to ride.  Props to the chap who did decide to ride though – after a few minutes of mustering his courage he actually jumped off it (landing safely, I hasten to add).  I didn’t have too much trouble from that point onwards, and even managed to ride the rollers without exploding into a mass of blood and bone.

So, overall a great ride – could barely walk the next day (switchback climbs play havoc with my thighs!), and there’s a lot I struggle with.  But there’s a lot of stuff I did ride that Mr Toast wasn’t expecting me to, and I finally defeated Evil Root Number Two.  Haw haw!

Bad bits: The link section, rocks/drops on corners.  Or rather, my inability to ride them.