An eventful weekend to say the least!  We managed to get ourselves and our bikes to the launch on Saturday, which was awesome.  It was also the maiden voyage of Mr Toast’s Mojo – as we exited Basset’s Pole island, Mr Toast pointed out that if we managed to get over the bridge, it’d be the furthest the Mojo had ever been.  There may possibly have been a Lord of the Rings movie reference uttered…

And here’s a picture of the aforementioned Mojo – Mr Toast requested that it be pimped across the interwebs!  As it was the first ride, he decided to go it alone, which was fortunate as there were a couple of minor niggly mechanicals that held up his ride.  All good now though!

Arrived at Birches Valley with an eager crowd huddled around the start of Follow the Dog.  There were speeches, champagne (ish) and peanuts aplenty, and Giant gift bags – modelled here by the lovely Jez. 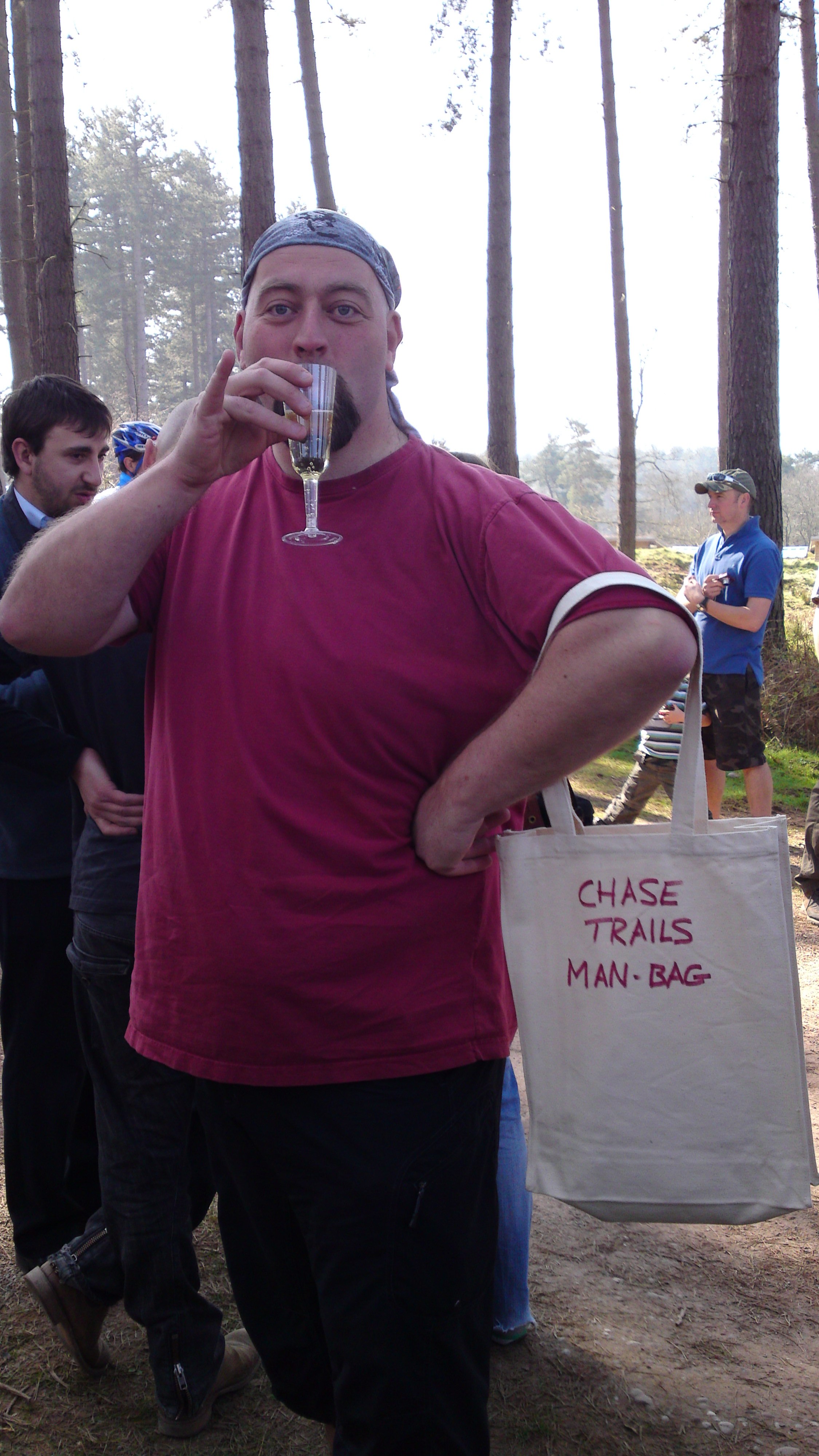 After a lot of photos, the ribbon was cut (I still maintain it should have been done by Chase Trails’ Martin, with a chainsaw…), and the hordes rode onto Follow the Dog, eagerly anticipating the new content.  These included posh new signage: 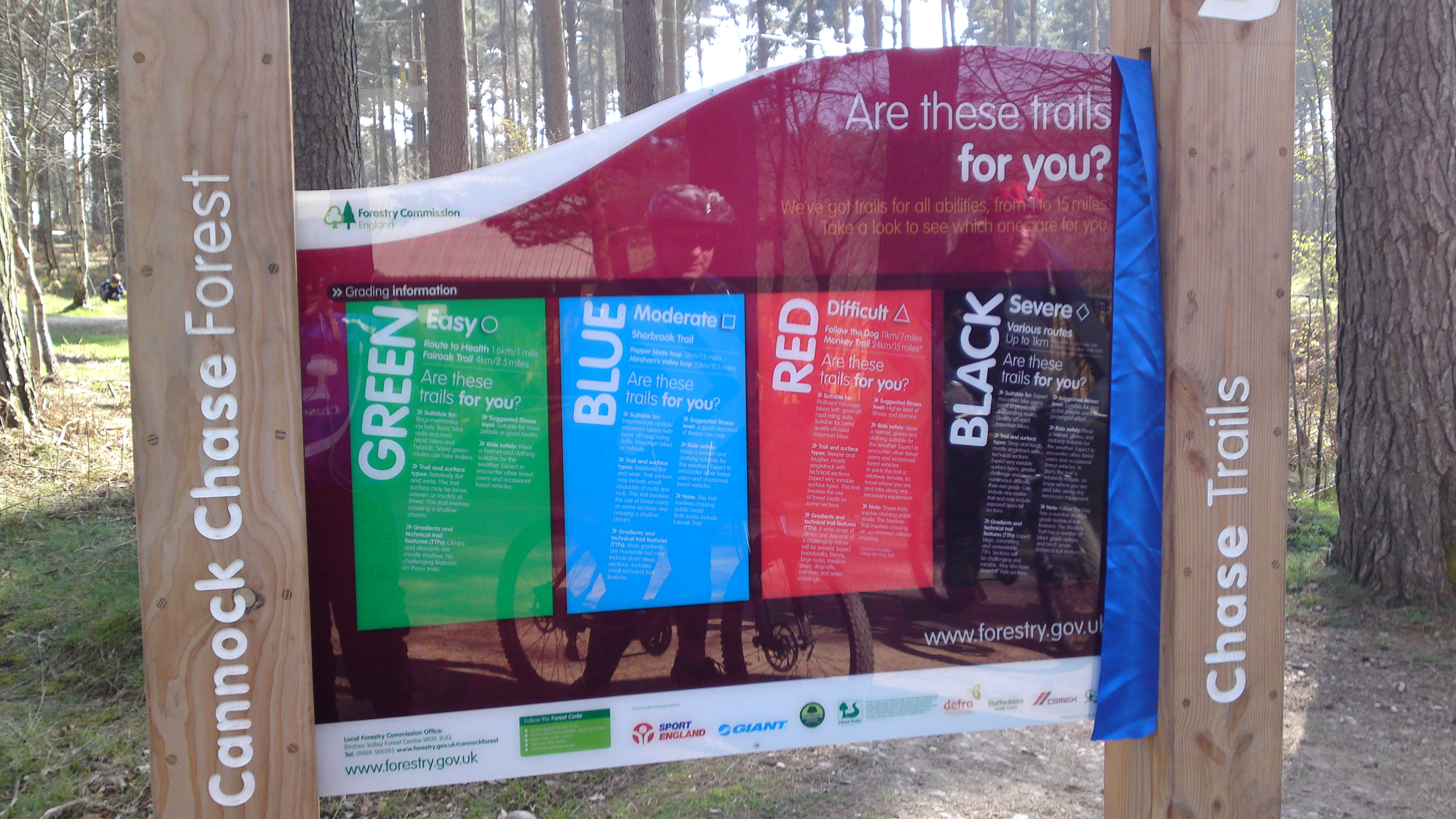 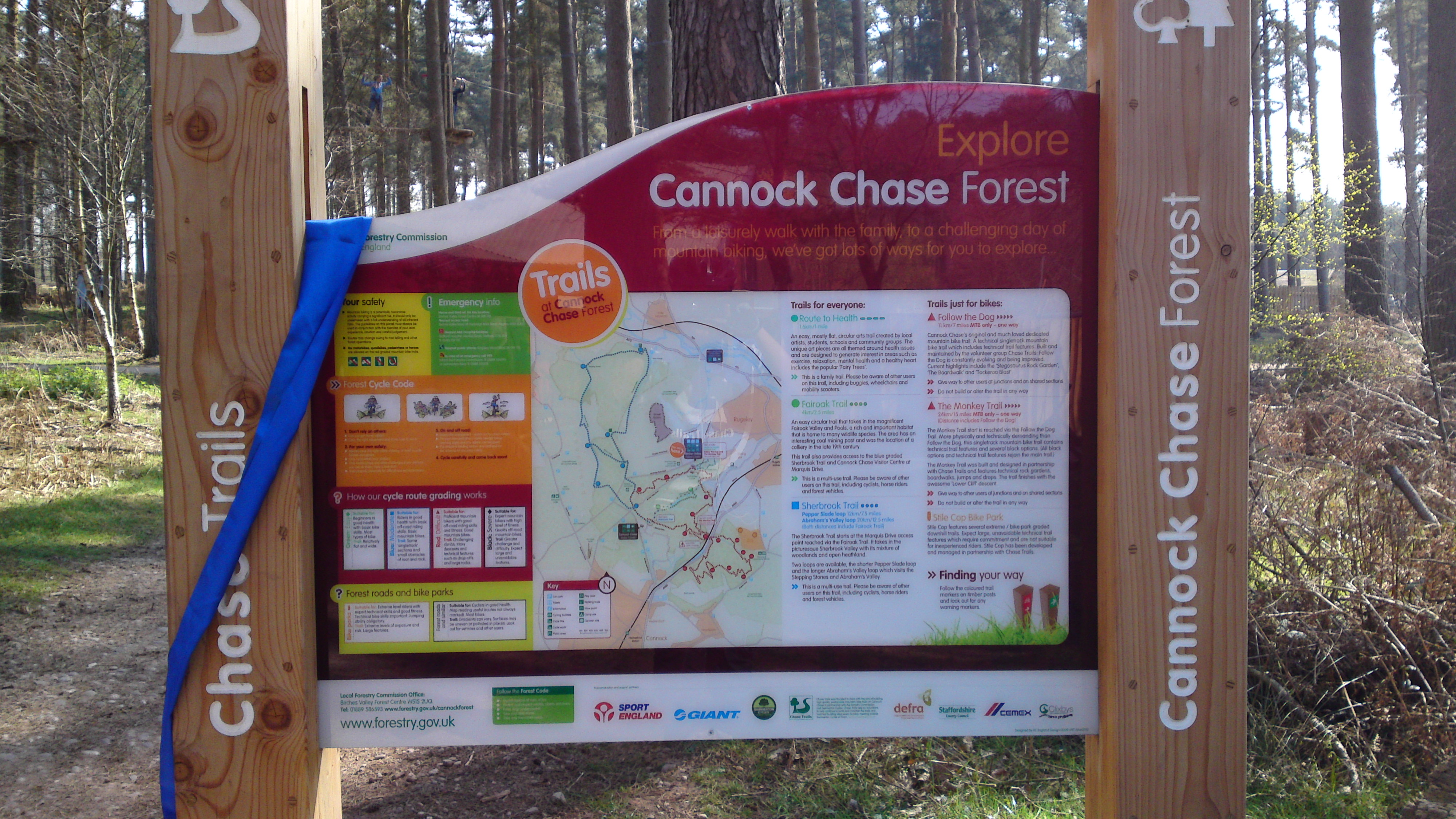 First ride of the day was the guided ladies ride, headed up by Veronica from Swinnertons.  There were quite a few of us, with quite a range of experience and confidence levels.  The most confident being Jessica, who was also the youngest (eight, I think?).  She rode everything, including Evil Root Number Two and Werewolf Drop (oh dear, I see a new nemesis for me there – the drop, not Jessica!).

The new sections that have replaced 13 onwards are amazing – incredibly fast and flowing.  With huge berms.  HUGE!  The last section caught me by surprise with some drops, which I rode in a slightly panicky fashion.  Then at the end a series of jumps which are awesome, and incredibly easy to get air on.  I think I’m actually going to have to learn how to land properly! It was actually awesome to ride in a group with no pressure and a lot of encouragement, and there was a great sense of camaraderie (and slight heckling of men-folk, after all the new entry posts to each section do have ‘No Men’ signs on…).

After that, there was a little Chase Trails get together.  I ate a delicious Bambi Burger: 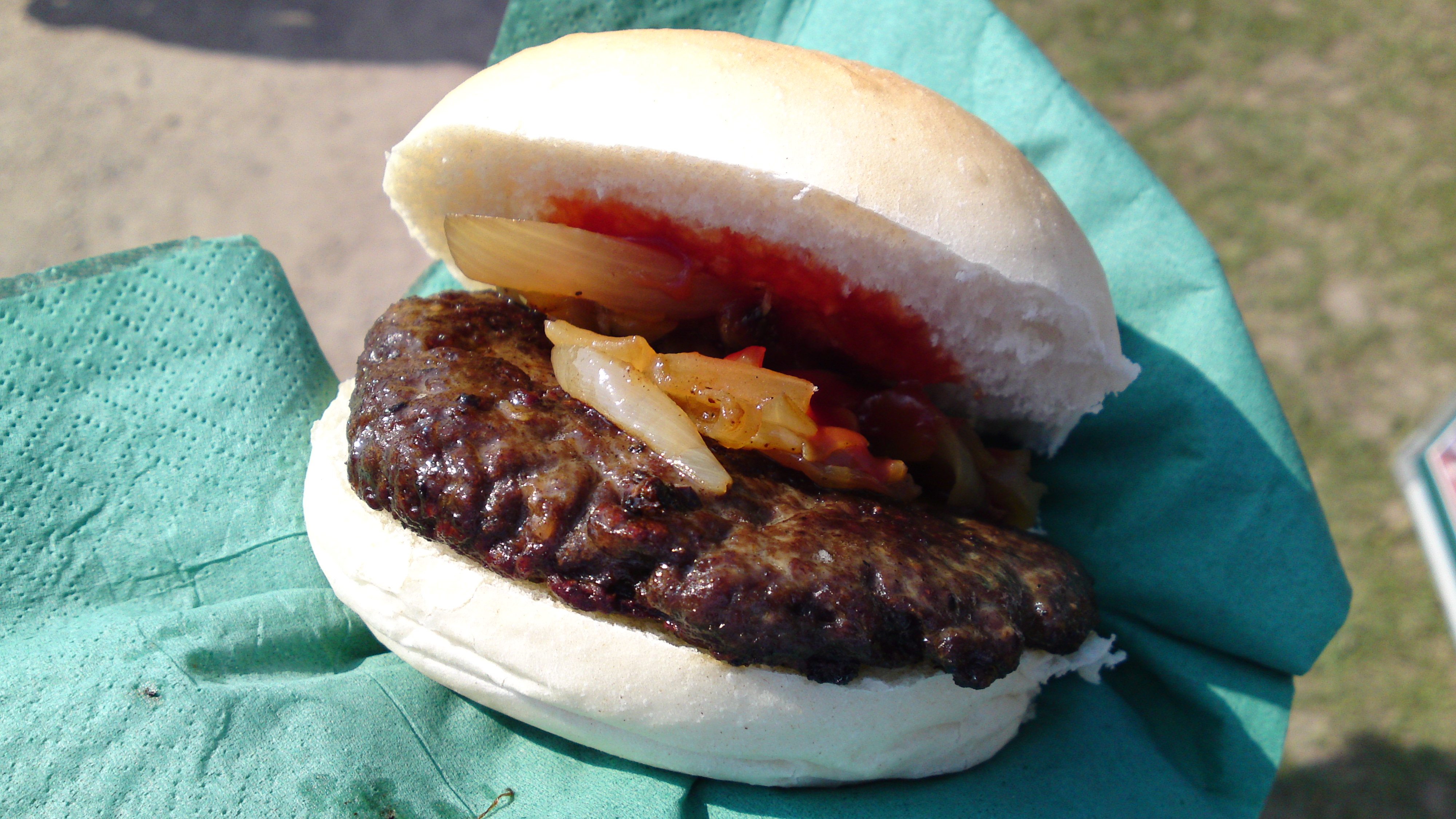 …and acquired a rather attractive blue hoodie.  As in the garment, not a chav.  After declining the Forestry Commission’s kind offer of free bananas, I set off for a lap of Follow the Dog with Abby.   It was the first time I’d ridden 6 & 7 for a while – the Stegosaur has had its teeth pulled somewhat, with the last couple of rocks onto the bridge made considerably easier.  Still good fun though, and prior to the repair, the last rock was a bit mental after the erosion.  Besides, there’s lots of new rocks on the Monkey for people to smash themselves up on, so it’s all good!

I rode section 8 quite slowly whilst Abby went flying off ahead – I was quite annoyed with myself, because I was braking far more than I needed to.  I just tend to brick it on the pebbly sections, same as with bits of section 2.  I seemed to take the jumps a bit more comfortably this week, I’m not sure whether that’s because it was dry, or because of the slight adjustments to my rear shock and saddle position. Part way around there’s the crossroads – Monkey or Dog? 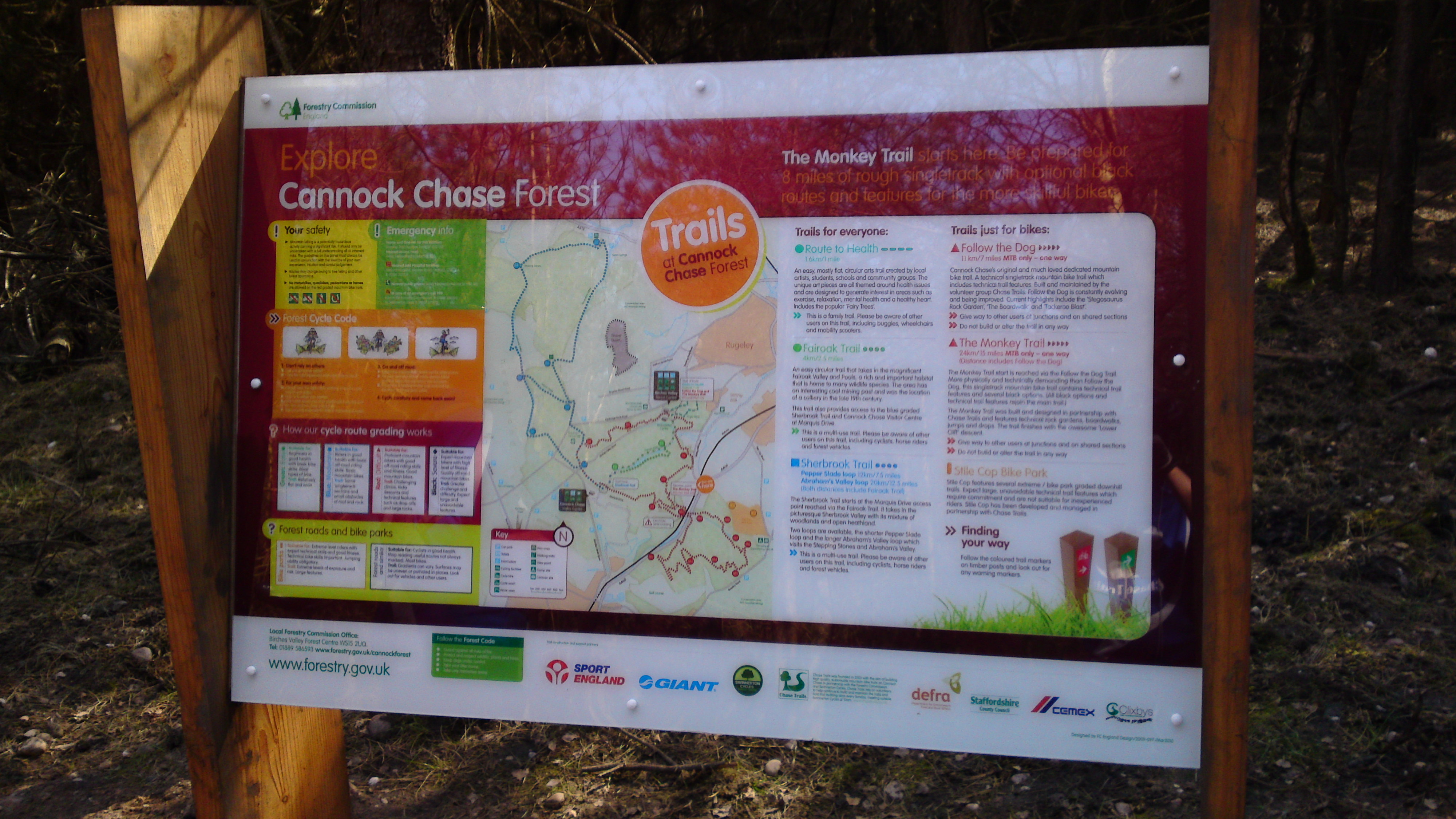 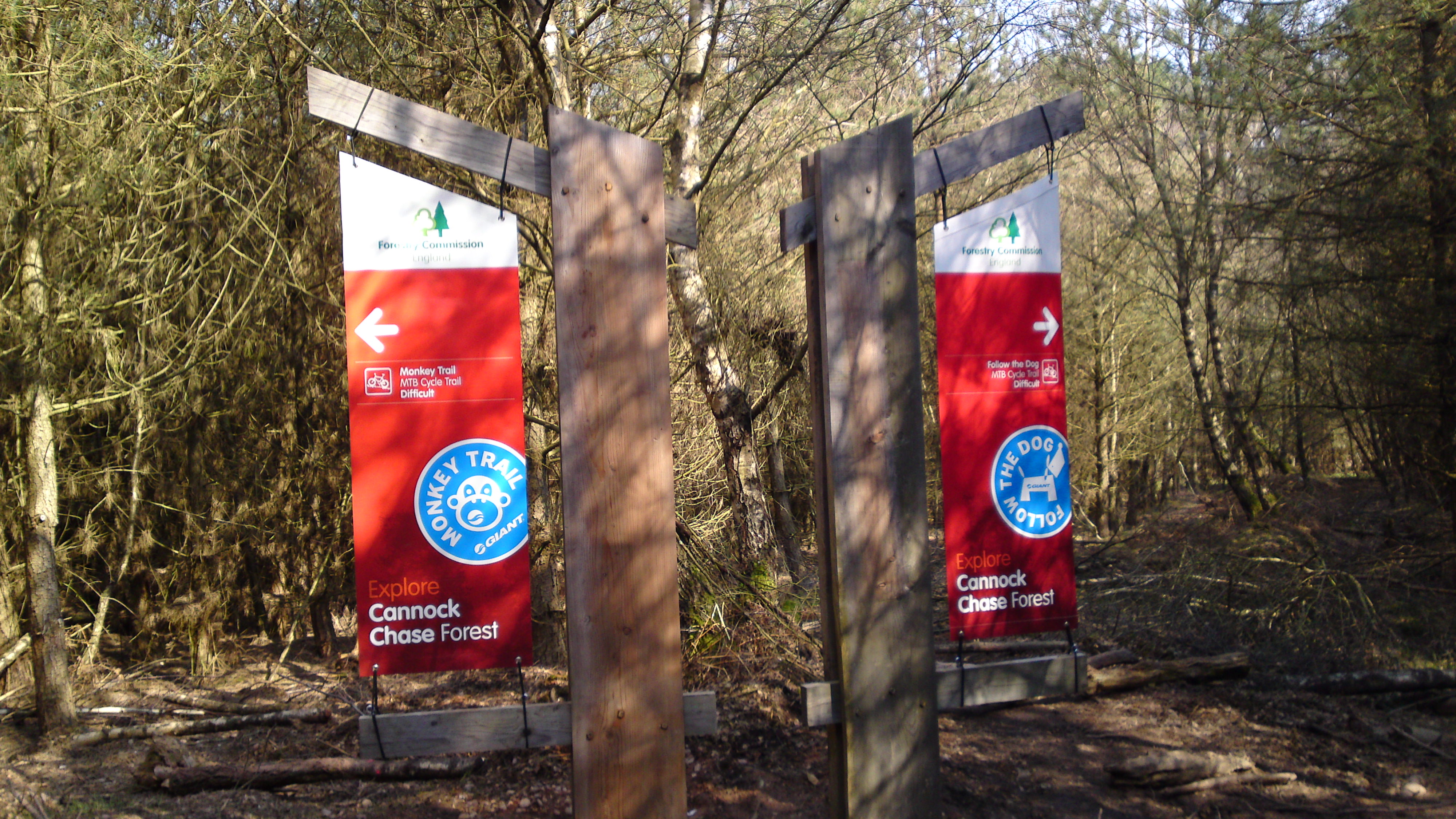 Given that I was on a bit of a time limit (meeting Mr Toast back at Swinnertons), we carried on down the Dog.  Fortunately 9-11 were re-opened, but felt strange in some places due to the tree felling.  Not bad strange, just different from how they used to be.  Sadly we ran out of time, and took the Heritage trail to see if Mr Toast and his Mojo had made it out of the Monkey alive.  Both were unscathed, and rather cheerful!

I’m really looking forward to riding more of the new stuff, and pushing my riding a bit more.  Good work to Chase Trails!  We managed to get a car this weekend as well, just need to get a towbar fitted and we’re off!

Trail: Bit of green, bit of blue, all of FtD (just not in order!)

Bad bits:  Getting shown how to ride by a small girl, yet still knowingI’m going to have a complex about that drop…

Good dogs seen: Leo of the Grimey Limeys, who’s possibly one of the best dogs in the universe.  He sings as well!