Went biking yesterday with Mr Toast and Ovide in tow.  Ovide’s an interesting chap – doesn’t ride that often, and has a low end GT Avalanche that’s slightly too big for him with a terrible, terrible fork.  Yet the guy goes like a bat out of hell and has no fear, and goes straight over things without pausing – including Evil Root Number One!

Trail conditions are a bit slippy at the moment thanks to the recent downpours, which left me very nervy on corners.  I went slowish but steady, my fear of falling off outweighing my desire to wheel buzz the boys.  Watching Ovide’s wheels shoot sideways every now and again didn’t do much to encourage me, even if he seemed relatively unfazed.

Poor sod came a cropper on 10 though. The three of us set off, and Mr Toast and Ovide raced off.  I was riding at a respectable pace (honest!), but I thought I saw and heard someone behind me.  I carried on until I could find a suitable place to pull over and let them pass…and there was no-one there.  Wooooooooo, spooky.

I waited for a minute or so, decided I was obviously going mental, and carried on.  Shortly after I caught up Ovide, which surprised me.  He was right behind Mr Toast before, and quite ahead of me.  Obviously I’d managed to ride with BLAZING SPEED and radically decreased the gap between us! Or, Ovide had skidded out, caught his handlebar on a tree, and had been sent flying from his bike. That could have happened too. 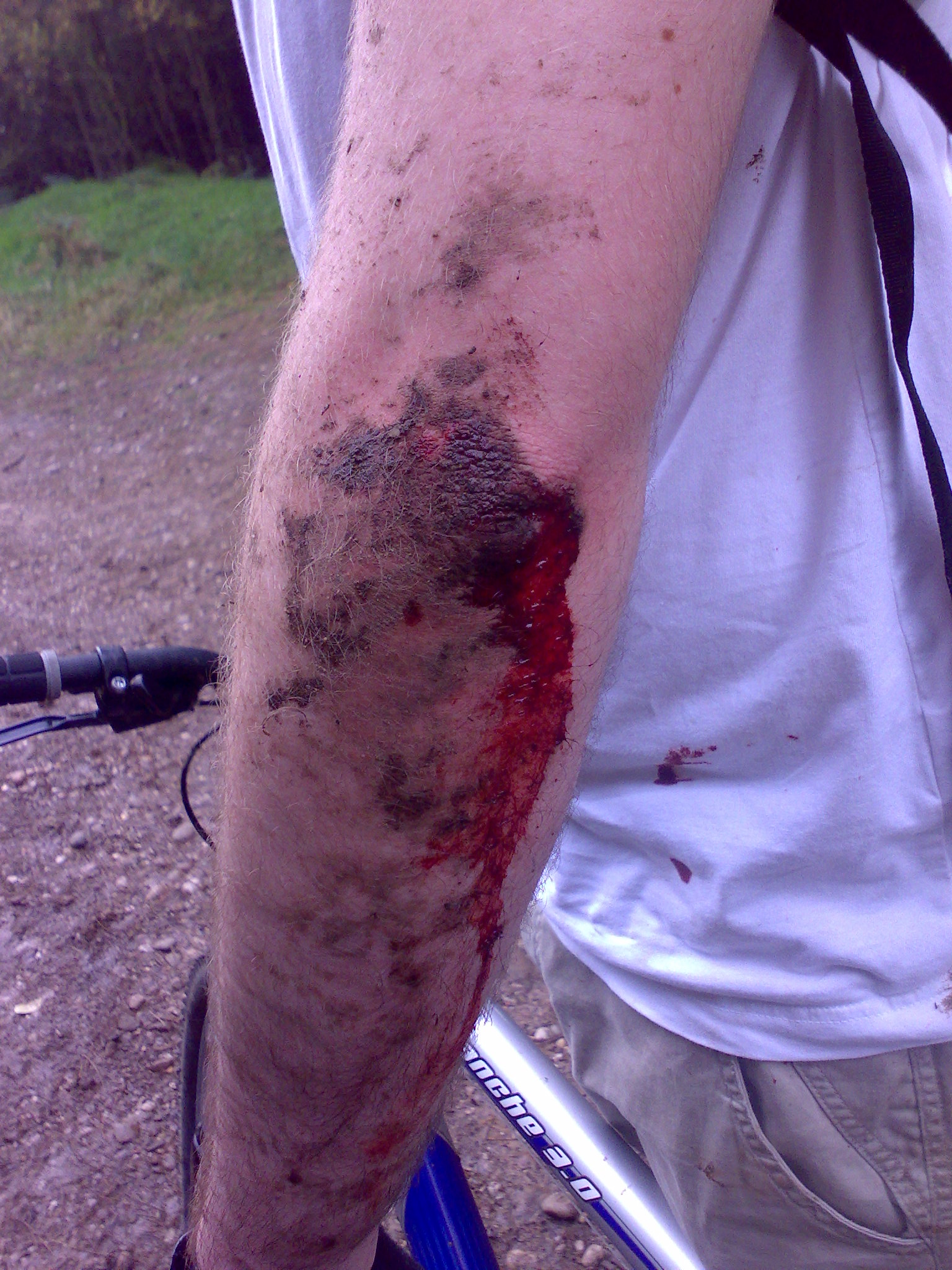 At the end of the section, Mr Toast marvelled at how Ovide was close to having a full zombie costume for the evening – blood and mud splattered t-shirt and shorts.  Don’t think Persil will be getting that out in a hurry…

But fear not, for Ovide was able to resume the ride, after cleaning the wound with…cranberry juice.   It wasn’t a bad cut, just ‘a flap of skin that keeps on bleeding’.  Finished the ride in decent time without further incident , and a good time was had by all.  Huzzah!

I’ve still got a really nasty cough which makes it hard to breathe sometimes, and I’m still a little phlegmy.  I should probably see a doctor or something, but in the meantime I have Gray’s Herbal tablets.  They obviously have awesome medicinal properties, because they have an airdale terrier type dog on the packet.

Post ride food snaffled: Tea and a slice of cake.  Asked for lemon, got coconut, bleugh.

Good dogs seen: Much better this week!  Quality Russells of both the long and smooth haired variety, two huskies, a beagle pup, and a demented border collie that wanted to get a bit too facially-familiar with Ovide’s nether regions.