I was still feeling a bit rough today, but well enough to get out into the woods on the bike.  Sadly, the same couldn’t be said of Mr Toast, who had to stay at home with a large supply of Lemsip.

For me, it was a pretty good day, although I was a bit uncomfortable for most of it.  I started the ride desperate for a wee, but didn’t want to leave my bike unattended.  Deciding that I could hold on for an hour or so until I visited my mother’s post-ride, I set off. And yes gents, Freud was right.  Women do have penis envy – the ability to discreetly relieve yourself in the wilds is indeed a gift to be prized.

I rode the first couple of sections at a reasonable pace, and rode all of the Stegosaur without cocking up.  There were a lot of large groups out today – a few were groups of kids, many of whom showed pretty impressive skills.  After pulling over to let a speedy chap past on the end of section 7 (just before Evil Root Number One), a large group of adult riders approached.  I let them pass too, and eventually caught up with them on the fireroad up to section 8.  One of them turned around and said, “Are you Mrs Toast?”

It was Kangaroo (possibly not his real name), who we’ve met at previous Chase Trails events – most recently at the Christmas party a few weeks back, where we admired the stuffed animals.   He was leading the Bike Radar forum ride, and asked me if I wanted to tag along on the end.  So off I went, a little nervous that I was going to be holding people back, but…what was the worst that could happen?  And besides, some of them couldn’t ride Evil Root Number One either! 😛

I followed them through section 8 – I didn’t ride it particularly well today.  It always seems to be this section that I get a bit skitty on when there’s been any raid.  On the plus side, there was no way I could chicken out of riding the end of 8 with that many people watching.  I kind of have this weird and utterly illogical policy with the exit to 8 – no-one around? I’ll ride it.  1-6 people around?  I’ll chicken out.  More than 6?  Well, this was the first time that situation had arisen, but I felt compelled to just go ahead.  And I did.  And as usual with every other time I’ve ridden it, nothing disastrous happened. Yay!

Followed them through 9-12 as well (some of them can’t ride Evil Root Number Two either…), but I was flagging a bit.  By this point I’d developed a nasty hacking cough, and was trying to discreetly trying to stop my nose from running with a casual wipe with the backhand of the glove.   At the start of 13 a lot of the forum chaps seemed to be heading back to their cars, so I carried on.

By the time I’d got to 14, I was really feeling the worse for wear.  Again, I was bringing up copious amounts of phlegm.  Unfortunately, as I’ve been raised with manners, and because I was worried about giving the local hedgehogs diseases (no really, that was what was literally going through my mind at that point), it went back down.  Eugh.  No wonder I’m still ill…

Actually struggled a bit getting up Ill Phil’s Hill, and was a bit spaced out on the remaining sections.  Nearly ploughed into the Stump of Indecision on 15, and my riding was a bit inconsistent – stupidly fast, then losing too much speed from braking.  If I’d taken it at a more steady pace, maybe I would have ridden it a bit smoother.  Didn’t do too badly on 16, just took it quite slowly though.

On the way back to Birches Valley I was aggressively pursued by a mid-sized brown mongrel, who was going for my left ankle.  Fortunately I had enough energy left to sprint away, and I was safe from Terrier Terror.

Although I’ve ridden better, I really, really enjoyed today.  I’ve been going a bit mental constantly stuck in front of a screen at work and at home, and my knees actually ache more when I don’t exercise.   I needed to get out, I just wish this bloody lurgy would bugger off so I can ride without hacking my guts up!

I turned up at my mom’s, had a cup of tea, she had a bit of a moan that I’d been out biking instead of taking her shopping or going for a meal, given that Al was at home.  She also pointed out something that I’d been completely oblivious to.

“Do you realise you’ve ripped the back of your shorts?”

The answer to that question was, “Why, no.  No, I didn’t know”.  It wasn’t just a little tear, it was a preeeetty large one.  Normally this wouldn’t be too bad…only today I wasn’t wearing cycling shorts.  I looked in the mirror, and, lo and behold, my right buttcheek was on display for all to see.  I scarily have no idea when or how it happened, so if anybody copped an unfortunate eyeful, you have my profound apologies! 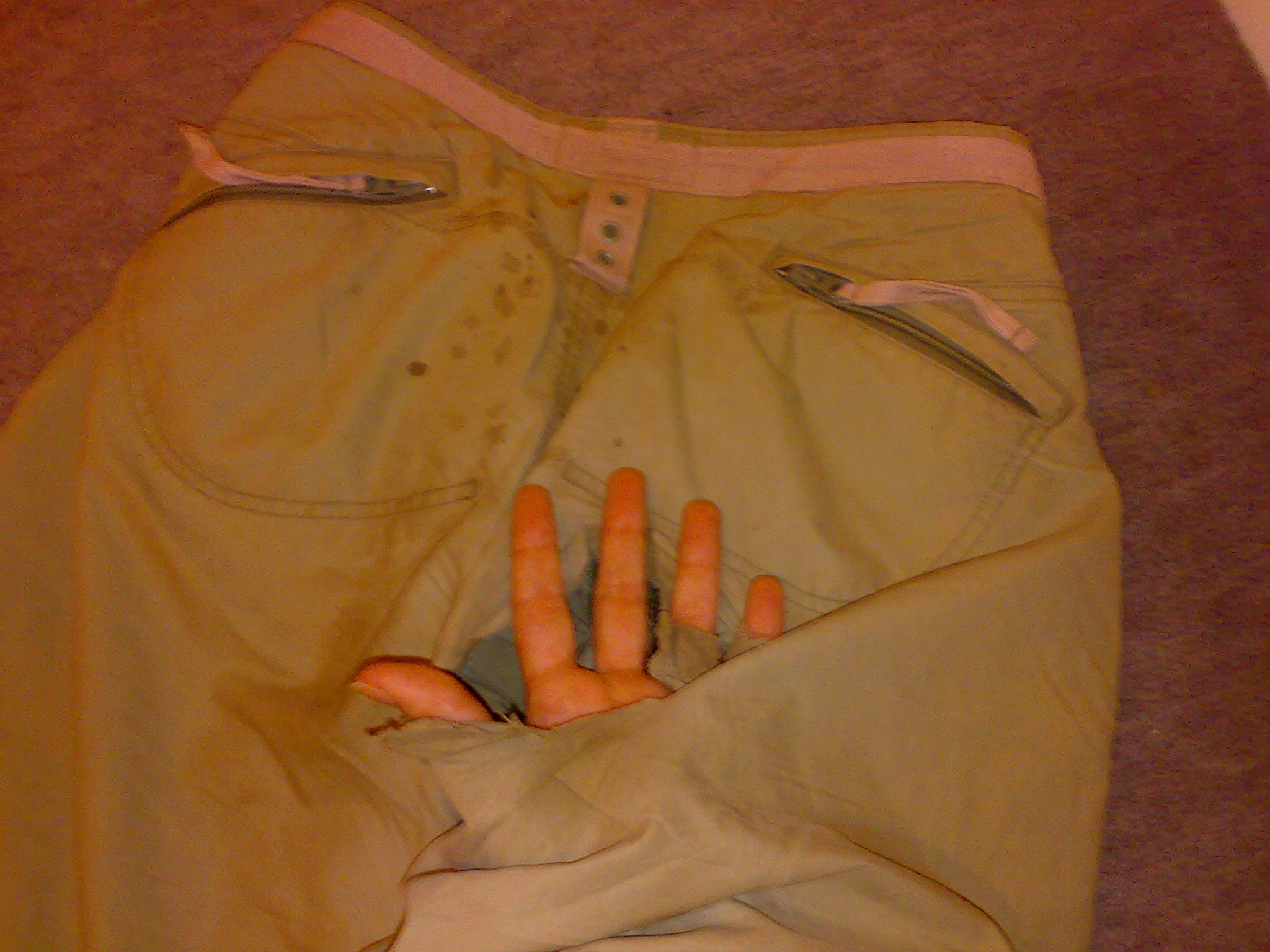 Definitely might have to look into getting some new shorts soon…

Bad bits:  Feeling ill towards the end of the ride…again.  The slightly worrying realisation that I might have flashed a load of blokes my arse.

Post ride food snaffled: Nothing immediately after the ride, but I did have a Thornton’s Caramel Slice from the garage on the way back home.  GODLY!