As we were travelling to FtD, I realised how much last Sunday’s exploits had shaken my confidence.  There I was, contemplating doing the full loop of Follow the Dog (well, of all the parts that are open), and I was filled with a palpable sense of dread.  Although I’ve done FtD more times than you could shake a stick at, I was mentally picturing all manner of terrible accidents I could have.

I could fall off the boardwalk!  I could come a cropper on the jumps on section 8, or fall off on the log slope!  It didn’t matter to me that I never had before – that was last year!

In the end, I decided on a compromise.  I missed out the boardwalk section, and went straight up the fireroad hill to section 8.  I did the old downhill version instead of the newer one, not due to fear but because I know my fitness isn’t quite up to it yet.

And…I had a blast.  I’ve lost quite a bit of speed over the past six months’ hibernation, and a bit of confidence – not only in terms of biking, but in common sense.  I felt that my tyres were a bit skittery, but I didn’t want to let any air out in case I ended up running around on them under-inflated.  As it turned out after the ride, Mr Toast pointed out that the front wheel was far too high.  But it didn’t stop me from having a whale of a time.

I’ve recently been re-reading Mountain Biking Essentials, which I picked up in Glentress.  The main thing that stuck with me when I was riding was ‘Looking Ahead’.  I’ve mentioned before that I have a chronic habit of looking at the ground immediately in front of my wheel, rather than the trail ahead.  I noticed I was doing it again, and marvelled at how much faster I went when I wasn’t staring at my front wheel.

I did Ill Phil’s Hill (section 14) for the first time since September, and it was fantastic.  The Chase Trails chaps have obviously put a bit of work into it over the winter – like section 13, it felt a lot smoother and faster than at the end of summer last year.  I did the entire section with a huge grin on my face.  Pausing at the top, naturally. 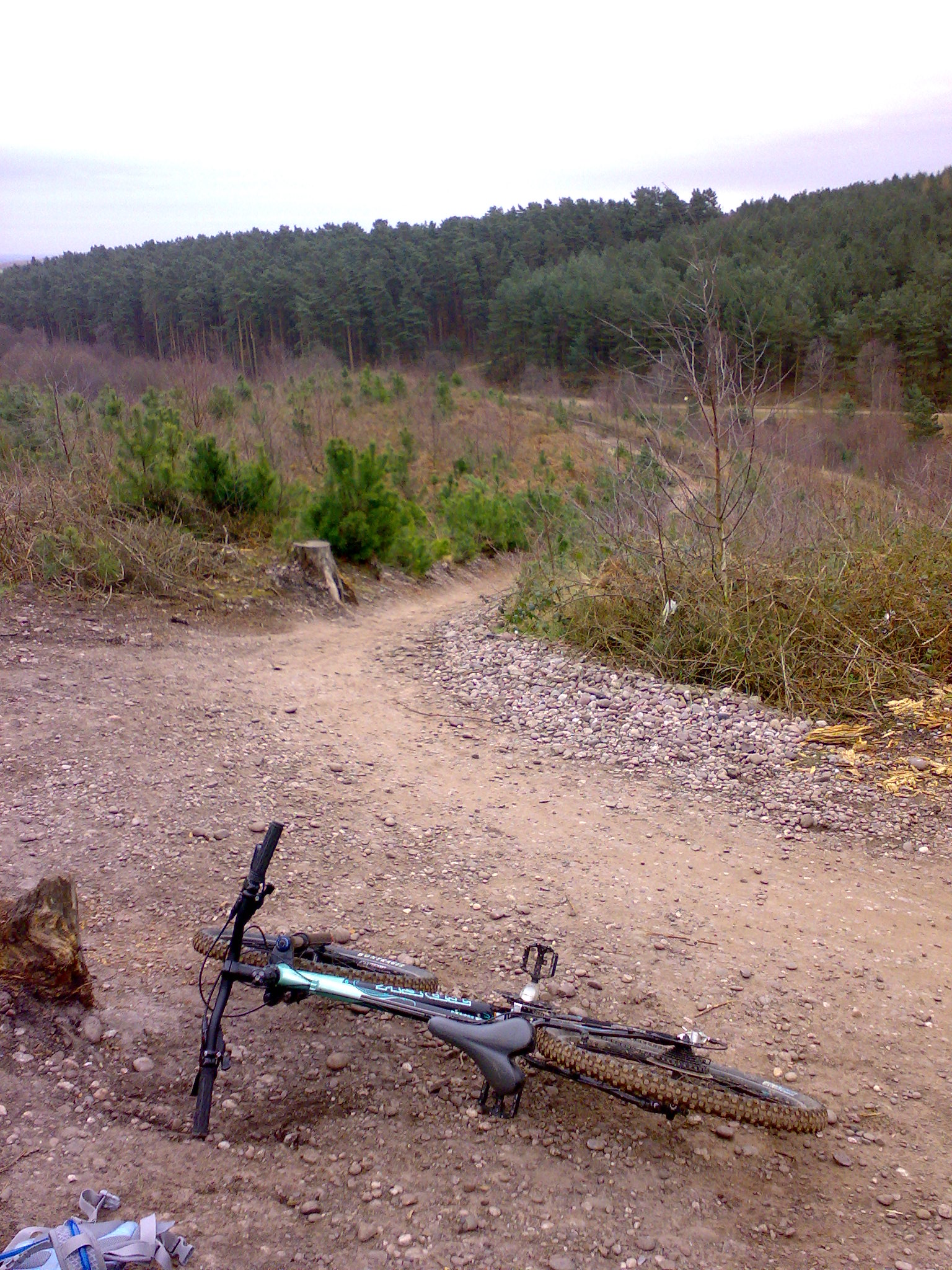 I’ll admit, once I got to section 16, I was seriously knackered.  Never mind keeping my head up and looking at the trail ahead, I was struggling keeping my eyes open (particularly my right eye, as my contact lens was playing up…).  It’s a very narrow section of singletrack, and my moment’s hesitation caused my handlebar to clip a tree, sending me off the bike.  Fortunately, I was going so slowly at this point that injury was always going to be fairly unlikely on the soft, soft foresty ground.  It was like a big snuggly duvet…

So, overall, it was an awesome ride.  I can see I’ve lost a bit of confidence and a bit of fitness since the operation, but I’m in a better position than I was this time last year.

Trail: Greens up to the top of the fireroad hill, then the remainder of FtD

Bad bits: Still not fond of section 16.  I guess I’ll grow to love it if I ever get good at riding it!

Post ride food snaffled: Food had stopped at the cafe, so it was a cup of tea and a delicious, delicious cookie.

Good dogs seen: A sweet little Westie pup, and and an awesome collie that dived into a water…outlet…thing.  Er, one of these: 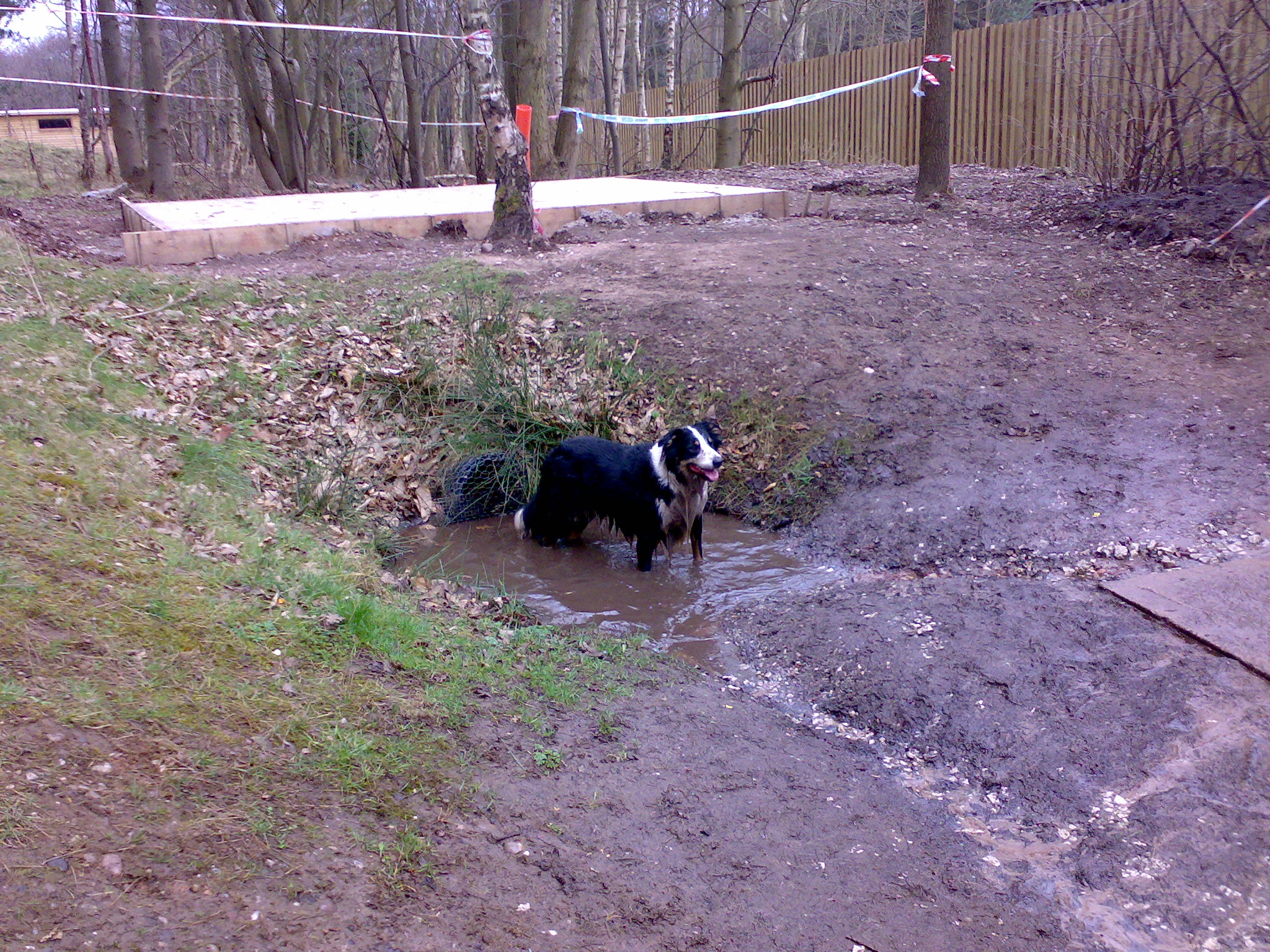