Despite frequent visits to the Shropshire Hills whilst organising the wedding, we’ve never actually been biking there. So, as the deed is now done, Mr Toast and I decided it was high time we paid a visit with our bikes in tow.

Admittedly, on the Saturday we didn’t actually bike around the hills – we took a 30 mile journey to Coed Llandegla (or ‘Dirk Diggler’, as Mr Toast took to calling it). I’d asked about on the Bike Radar forums about the difficulty, and decided to give the red route a go. It was fantastic! There was a lot of climbing, but it wasn’t as steep as Glentress, and was more contoured. I actually found Llandegla easier than Follow the Dog – it wasn’t quite as tight and was a lot more flowing, and the berms were full of Bermy Delight. The only parts that gave me trouble were the second north shore (did most of it, but it doesn’t half sap your momentum), and a short but very steep downhill just before the end. Annoyingly, I’ve ridden worse, but I just felt so knackered by that point my brain just said, ‘No’ as I looked down. It wasn’t so much the gradient but the rocks that freaked me out. Again, general lack of fitness and a slight cold hampered me (to the point where I threw up at the top of one hill), but it was still great fun (the route, not the throwing up). 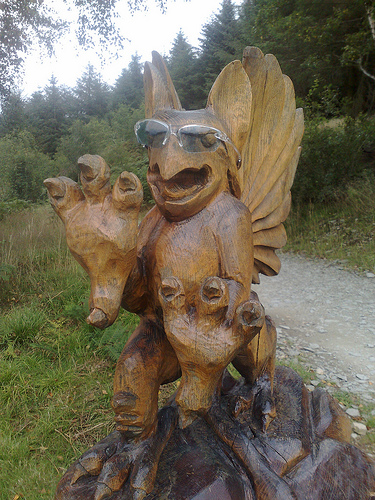 On the Monday we sallied forth to the Long Mynd for a short ride. It was beautiful, but ridiculously windy, and I nearly got buffeted into the heather a couple of times. As with most bridleways, there was a copious amount of crap (in the literal sense, of the sheep and horse variety) to avoid. I thought I’d dodged most of it, but when I finished the ride, there was a flattened wodge of horse crap on my saddle. -_-

Trail: Llandegla – full red/Long Mynd – short pootle across (about 5 miles or so) 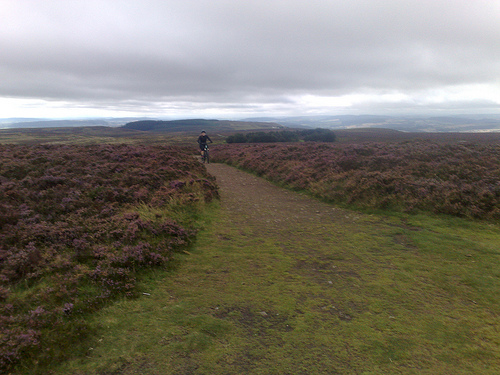