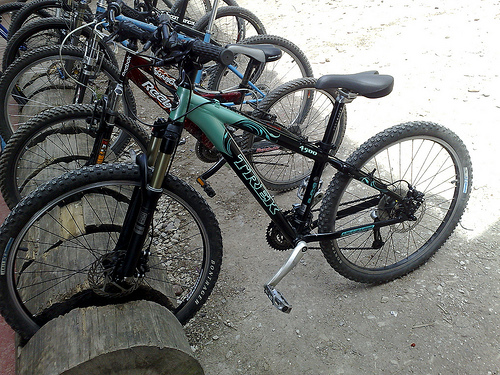 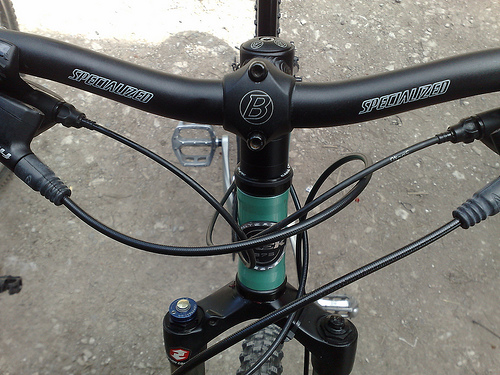 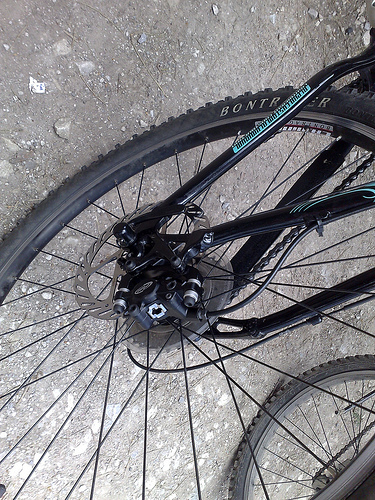 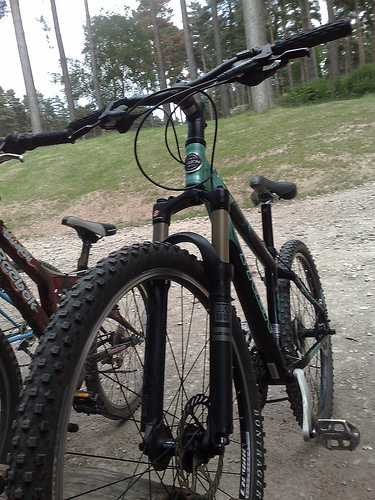 The brakes were new, the rest of the stuff was remnants of Mr. Toast’s previous bikes – not that I’m complaining, he keeps his stuff in good nick! 😉

The new brakes were fantastic – it’s amazing how much confidence the ability to stop can give you! The slightly wider handlebars took some getting used to, but it generally made for a more stable ride. Forks were very smooth, but perhaps a bit too squodgy, so Mr. Toast is going to put a little more pressure in them.

My first lap was very slow. I’m not sure whether this is because I was getting used to the new bike setup, or whether I was just fatigued from doing more exercise than usual (I’ve started going to the gym, did a session on Friday night, but I my legs and knees were killing me, and I felt that I couldn’t really push myself.

Despite that, the first lap went pretty well, especially Ill Phil’s Hill. I was a bit disgruntled on the first section, as my flow was disturbed by ‘Harry’ – a large black dog lumbering around the end of the section. At least he stayed off the track, unlike one of his owners – a young boy who was walking up the track whilst his parents looked on. -_-

I started doing a second lap, and I was much, much faster. Again, my flow was disturbed near the end of the track – this time by a huge mass of fly covered horseshit, right on the berm. Nice to know that people pay attention to the ‘mountain bike only trail/bikes only/no entry’ signs. Ho hum. I tried biking up the fireroad hill – failed again – and my knees were screaming at me. So I decided to do on last bit of FTD, before exploring. Found an awesome path which was literally like a rollercoaster, and it made me want to explore more. Maybe next week – got to lay off the risky stuff before the wedding!

Trail: Follow the Dog – one and a bit laps

Highlights: The first three sections of the second lap, and having consistent braking!

Bad bits: Inconsiderate bastards on the track.  What, you can’t give the mountain bikers their one track, which they’ve built and maintained themselves.

Good dogs seen: Meh, it was a bit barren for good dogs.  There was something that looked like a staffie/jack russell cross – he was nice.